The valley is under the iron grip of the armed forces and Pakistan does not have the military power or political support to change the status quo, observes Colonel Anil A Athale (retd), after a recent visit to Kashmir.
A three-part series. 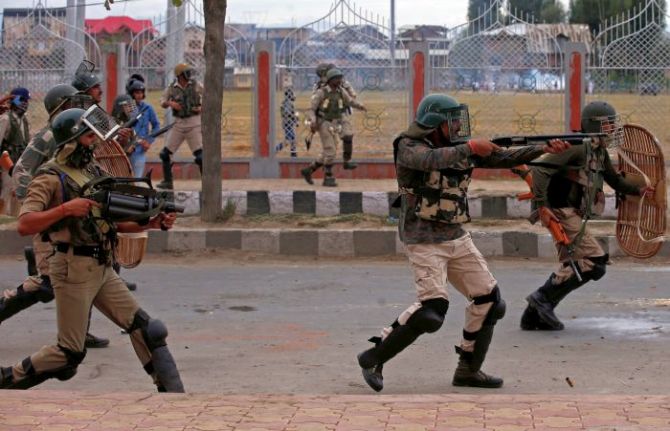 IMAGE: The alienation of a significant part of the present generation of young Kashmiris has indeed crossed the point of no return. Photograph: Danish Ismail/Reuters

Kashmir is never far from the headlines in the Indian media. But it has mostly been bad news, either the teenage stone-pelters or the loss of lives of our soldiers, that finds a mention.

So the good news first. It has been nearly two months since the annual Amarnath yatra ended on August 24, 2018, with roughly three lakh pilgrims making the journey. The two-month-long event passed off totally peacefully with NOT a single incident of violence.

Yet, in our topsy-turvy world of instant media, this found hardly any mention. The Indian media seems to live up to the old adage it is news only when man bites dog and not the other way around.

Besides ignoring the achievement of the security forces, this sidelining of a major 'victory', it also failed to give credit to the population of the valley who supported the pilgrims.

In some ways it is a result of the late realisation by Kashmiris that tourism or pilgrimage is in their interest as it means income -- and that peace is essential for it. It is the public pressure on the militants that seems to have worked.

As someone who was actively involved in studying Kashmir since then and a frequent visitor since, I sought to know the truth.

It is to find answers that I visited the valley from October 12 to 18, travelling to many places like Kupwara, Tregam, Budgam, Sahibabad, Sopore and Pattan. I interacted with many security officials as well as a limited number of civilians during this visit.

The clear answer is that the situation is nowhere similar to the 1990s. In some ways it is worse than at that time.

In this, I agree with the David Devadas's observations that the alienation of the youth and general population from the Indian State is far greater than it was in the 1990s. Incidentally, I happened to be in the valley at the same time as David and we spent two fruitful evenings discussing the Kashmir issue.

The alienation of a significant part of the present generation of young Kashmiris has indeed crossed the point of no return. This has an important lesson for the policy-makers that no amount of economic goodies or packages will work in Kashmir.

To begin with, Kashmir erupted in the late 1980s and early 1990s as a 'political issue' and there were no economic demands placed on the Centre. Yes, unemployment exacerbates the violence, but is not the cause but consequence of the revolt.

This cardinal truth is not understood by many, and certainly not by the TV 'studio warriors' on Kashmir. The general (wrong) tendency to equate the Kashmir valley with the whole of Jammu and Kashmir continues and nonsensical talk of a revival of 'Kashmiriyat' as a solution continues to sprout.

Pray, how is the so-called 'Kashmiriyat' of any relevance to the Jammu region, Shia-dominant Kargil or the Buddhist-dominated Ladakh? In fact, the unnatural tie-up of three culturally and linguistically diverse regions in a single state is part of the problem of J&K.

Till the unrest in the valley began in 1988-1989, there was no armed forces present between the Pir Panjal range and the LoC.

Once infiltrators from Pakistan entered the valley, nearly three divisions were inducted helter-skelter. It is a tribute to those brave soldiers who by sheer dint of hard work and bravery brought the situation under control.

The Indian Army was that time outgunned by the militants who had better weapons and no shortage of ammunition that flowed in through porous borders. Today in its place we have a three-tiered wire fence, modern surveillance gadgets and modern arms to match the militants.

Militarily, the situation is that the people of the valley and Pakistan have realised that wresting Kashmir by force is an impossibility.

The situation in 1990 was the opposite. People of the valley felt that 'azaadi' was around the corner. Many had begun to align their watches with Pakistan time and stopped paying their utility bills in expectation of a change of regime.

Communications in the valley are greatly improved with bigger roads, flyovers and even a rail line connecting Baramulla with Banihal. With successive governments showering economic goodies on J&K, the state is prosperous and people below the poverty line are less than 6%, the lowest in India.

On the other hand there is a huge demographic bulge of frustrated youth.

The average family in the valley has five to six children, and every decade has seen the population of the valley triple!

In this sense the valley resembles other areas of high population growth like Bihar, eastern UP or Pakistan! Runaway population growth is the elephant in the room that seldom finds any mention in debates over Kashmir.

In the 1990s, and right up to 2000, the big daddy of world politics, the US, fully backed the Kashmiri insurgency. So it was not uncommon to hear slogans like 'Bill Clinton zindabad' during public demonstrations during that period. Now international support for the Kashmiri cause has more or less evaporated, though Pakistan continues to support it.

Many Kashmiris have illusions about the importance of their cause for the country and the world at large thanks to the Himalayan blunder of India taking the issue to the UN in 1948. But the brutal truth is that Kashmir poses no threat to Indian security and the valley is under the iron grip of the armed forces.

Pakistan does not have the military power or political support to change the status quo.

Colonel Anil A Athale (retd) -- a military historian specialising in counterinsurgency -- has been a Kashmir watcher for 27 years. He is the author of Let the Jhelum Smile Again published in 1997. 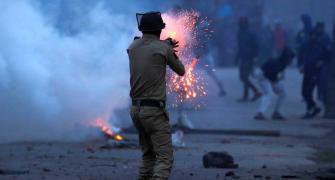