News
Business
Movies
Sports
Cricket
Get Ahead
Money Tips
Shopping
Sign in  |  Create a Rediffmail account
Rediff.com  » News » 'This anger is now too far gone to be easily reversed'

'The new generation of teenagers which has taken the forefront is largely an amorphous, leaderless mass.'
'It is extremely difficult to find a representative with whom to negotiate now, unless one turns to a militant leader.' 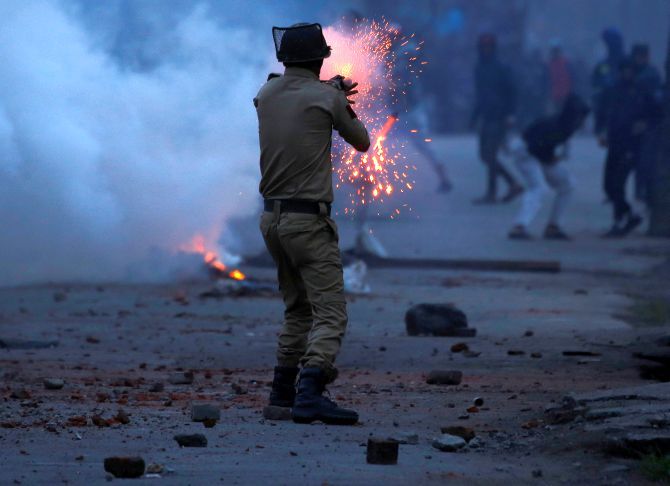 IMAGE: A policeman fires a tear gas shell at demonstrators during a protest in Srinagar, May 2018. Photograph: Danish Ismail/Reuters

A chain, it is said, is only as strong as its weakest link, and what holds true for chains applies to nations, too.

A nation is only as strong as its weakest component -- and in India's case, the weak link clearly is Kashmir, the handling of which, at the best of times, seems like an impossible task.

That elected governments are seldom in tune with the aspirations of those who elect them is a truism about democracy. But in the case of Kashmir, what complicates matters is geography confounded by history that is marred by politics.

Such is the attitudes all around on the sensitive border state that peace in the volatile Kashmir valley refers now merely to the absence of violence. Thus, a few days of incident-free life in the valley is taken as an affirmation of the political process, even when the facts are to the contrary -- like the abysmal turnout in the recent local body elections.

For longstanding Kashmir watchers like David Devadas, the situation can be extremely frustrating. But unlike many observers on the region, Devadas has spent more time in Kashmir than elsewhere and thus knows the people's daily concerns as well as is a witness to the changing strands of what is euphemistically called the Kashmir problem.

His latest book, The Generation of Rage is Kashmir, is a must read for everyone concerned about the state's future, especially the policy-makers who have often been blindsided by the twists and turns in the agitation.

The book is first and foremost a reporter's work -- Devadas is a veteran journalist, and this book offers an insight as much into his working process as it is a reflection of the true situation on the ground -- and does what a reporter is ingrained to do: Let the voices tell their own story.

And it is a story that is grim and worrisome for those for who put the nation above all, but especially to those who call the shots for it is in their power to rectify the situation.

"I think they are hamstrung by their blindness and lack of understanding or policy," David Devadas tells Saisuresh Sivaswamy/Rediff.com. The first of a two-part interview:

Very well written book, David, but it must have taken a lot out of you, I gather? I say so because I personally found the book a tad too depressing -- not its contents itself but what it portends. For India, and for Kashmir. Do you feel hope, or the absence of it?

Honestly, Sai, the situation is bad. But rather than describe myself as hopeless, I'd use the word frustrated -- frustrated at those who run our country.

And I include bureaucrats, security forces, intelligence chaps, security think-tanks, and political bosses from across the political spectrum.

The worst part is there is no accountability. No one is ever held to account. No deadlines are given. Nobody pays the price when colossal mistakes are committed, without even a backward glance.

I have known you for long, and as a political journalist to begin with. When and how did the interest in Kashmir begin? Or was it a natural extension of what you were doing?

When I was a political editor in the'90s, I covered Kashmir, along with the Mandir-Masjid issue, the Lok Sabha, the Cabinet, prime minister's office... the gamut. In 1998, a publisher suggested I write a book, saying: 'You are an expert on Kashmir. It'll take you six months.'

When I began work, I realised I had to unlearn and re-learn a lot, since there is a lot of propaganda and half-truths mixed up with narratives about Kashmir.

When my first book was finished, I thought I was done with Kashmir. But when agitations broke out after the land transfer in 2008, I was again told that I was an expert and should write another.

It's become a bit of a trap: the more I do, the more I get drawn into it.

You spend a lot of time in the valley, do you also live there? Or alternate between Kashmir and Delhi?

I've lived in homes there for long periods almost every year since 1995. I come and go, but have spent more time in Kashmir than in Delhi over the past decade.

In the beginning, I presume it must have been difficult to make inroads, find acceptance among locals. How did you manage to break the ice?

The only ice is on the lake in midwinter, Sai. The Kashmiri people's warmth and hospitality is unrivalled. And I have found in general, there and elsewhere too, that if one goes up to people and talks to them with an open heart and mind, they respond and share a lot.

From your earliest foray to now, how has the Kashmir issue changed/evolved?

It has become far more entrenched. The gap has grown. Anger has risen.

More important, as this book elaborates, the millennial generation -- today's teenagers -- have taken the forefront, and they are by and large radicalised and deeply committed to their cause.

The sad thing is that this has not been a continuous slide. Around 1993 to 1995, and again around 2004 to 2007, people by and large were willing to settle down to a negotiated peace -- peace with dignity.

Tragically, Mr (Atal Bihari) Vajpayee's tireless efforts were wasted. And vast numbers of forces were poured in to the valley in 1994, just when a negotiated peace was possible.

It's a nightmare, like Alice in Wonderland, what those who run the government get up to.

Given your unique positioning, straddling both regions, you have a rare insight into what Kashmir wants, and what Delhi can give. Is a modus vivendi between the two possible?

The new generation of teenagers which has taken the forefront is largely an amorphous, leaderless mass. It is extremely difficult to find a representative with whom to negotiate now, unless one turns to a militant leader. 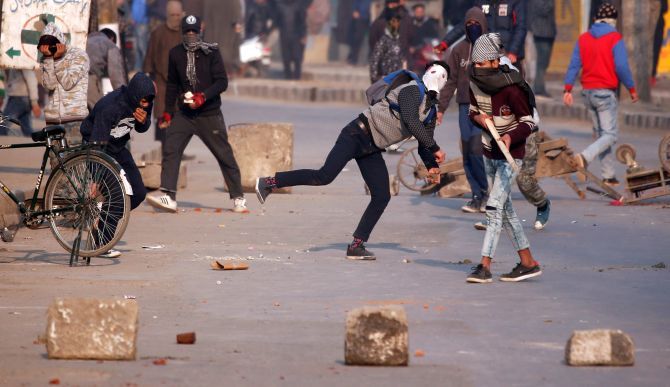 IMAGE: According to David Devadas, the rage grew after 2007 because the counterinsurgency apparatus was not wound down when militancy wound down. Photograph: Danish Ismail/Reuters

As you shift from Kashmir to Delhi, you must have realised that there are two perspectives to the Kashmir problem. One as seen from Kashmir, and another as seen from New Delhi/India. Do you think the two can be bridged?

Perhaps it is even more complicated than that. There are many positions on it in India, and many within Kashmir too, even just within the valley.

One chapter in my book gives the findings of a survey we conducted among six to 7,000 students in more than 60 schools, colleges and madarsas across the valley. The title of the chapter is 'Varied opinions'.

Even the word 'azaadi' meant different things to different respondents, and opinions vary across geographical and socioeconomic location, across gender, and across time.

As I pointed out, the Indian State missed out on two distinct periods of hope and opportunity.

The rage in Kashmir, the focus of your book, is a little hard to understand when viewed from the rest of the country, do you think?

If that's so, it is because people across the rest of the country don't relate to what life has been like for young people in Kashmir.

Imagine growing up without ever being able to go for a picnic, or for a late evening stroll, or for an ice-cream after dinner. Young people had to be home long before sundown through most of the '90s, and lights were put off after dark for fear of attracting attention.

Then, the humiliation and distress of searches, checks, barriers, the fear that one might be killed at any time.

I have argued that the rage grew after 2007 because the counterinsurgency apparatus was not wound down when militancy wound down.

A new generation -- the children of war -- had come of age. They were inured to violence, immune to fear. They had seen death and destruction at close quarters from the time they were infants.