The protest against the gang rape itself is not bad. But to provoke the police, to disobey the law and to insist on protesting wherever they want, whenever they want and however they want is not done, says S Pushpavanam.

If something could be called excess, it is certainly the protests against the gang rape in New Delhi and the media campaign that followed. A constable, who was injured doing his duty, died on Wednesday.

Anonymity has given the protesters the courage to break the law and defy Section 144. They were egged on by the live media coverage. None of the media anchors told them defying the law was wrong. When the cop died, the media behaved as if they had nothing to do with it.

The protesters are too immature to understand how the system works. They are young, they want instantaneous justice. It is not possible in a country where justice itself is not always possible, particularly for the poor.

No one can justify rape or condone it or not demand booking the culprit. Gandhiji said, 'The idea of civic disobedience is to provoke a response.' That has been done. Delhi's police commissioner is on television daily. The chief minister of Delhi has given her reaction. Even the prime minister has made a statement.

The police, no matter what the protesters and the television news channels say, have done a good job. They traced the culprits within 24 hours and arrested all of them even before the protests begin. They have filed a First Information Report. They showed exemplary restraint by using only water cannons for two days.

Then they have to investigate, record the statements of witnesses, gather evidence, record the victim's statement, grill the arrested accused and get the full facts before filing a chargesheet. This cannot be hurried through just because you want punishment for the accused. The government has offered to appoint a judicial committee to see how best to improve preventive steps and have speedy trials.

The government cannot go any further. It is time the protesters went back home.

Now what justice can be done by the death of a cop? Are their lives so dispensable?

The protesters are not able to articulate what justice they want. Some want the culprits hanged (that too perhaps within a week). Some want the accused castrated. They do not understand that the so-called culprits are only the accused. They have not yet been convicted of the crime.

In Annamalai University, Tamil Nadu, a medical student killed his room mate when he resisted ragging, chopped him into pieces and put those pieces in a box and disposed the box. Noted lawyer Ram Jethmalani argued for the accused in the high court and got him out as the weapon was not produced. Luckily, the Supreme Court convicted the accused.

The ignorance of the protesting crowd is understandable. But what about the speakers?

As rape victims may not come forward to complain, the law provides that anyone -- not necessarily the victim -- can complain. This is a rare exception. The protesters should use this and start complaining wherever they even suspect a rape.

Punishment is already severe, but it is less than what is given to a murderer as murder is worse than rape.

Let us look at the prevention. The police has allotted a three digit cell number for eve-teasing and rape complaints and ensured that the police reached the spot in about 10 to 20 minutes in a city. If it is in a remote area, it might take time.

Sending a constable behind every woman or attaching a sensor which will be activated in a struggle are all impractical solutions.

The media never let sane opinions emerge. It is disgusting that they want to make money out of rape. If a few hundreds (out of 1.21 billion) gather in Delhi, the 'nation is outraged' and the 'nation" is angry. It is hardly noticed when a rape and a murder takes place everywhere

In Tuticorin, Tamil Nadu, on December 20, a girl was raped and murdered as reported on the Tamil news channels and in the newspapers. Not a word about this on the English channels. Either they do not know their geography or the motives are different from what is professed.

Media regulation has become an important issue now. The continuous news coverage, after a point, undermines the importance of the real issue. Viewers switch off. Markendaya Katju of the Press Council of India should take this up instead of taking up the case of policemen beating pressmen who refuse to disperse.

I know many will disagree with what I have said. However, I am more curious about what women readers think. 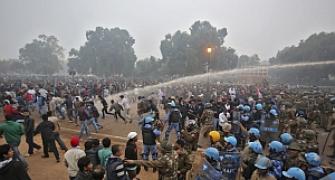 In first person: How the Delhi protest was hijacked

India at Raisina: The People were the Heroes

The two kinds of violence on display at India Gate