News
Business
Movies
Sports
Cricket
Get Ahead
Money Tips
Shopping
Sign in  |  Create a Rediffmail account
Rediff.com  » News » Costs for China in J-K are exorbitant now as it was then

The reasons for China's negative response are located in its territorial dispute with India but also to its grand designs of dominating the region from its previous position of being merely a "balancer" between India and Pakistan, points out Srikanth Kondapalli, Professor in Chinese Studies at JNU. 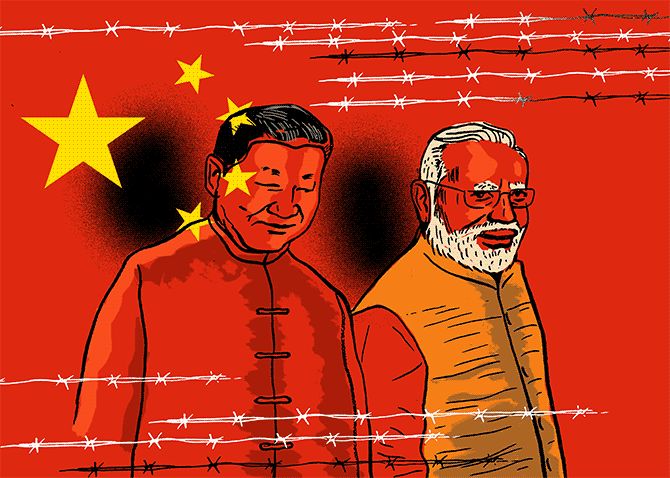 Indian Parliament's momentous decision to apply the entire Constitutional provisions to the region of Jammu and Kashmir and thus abolishing its special status, reorganisation of the state by creating two new Union territories of Ladakh and J&K, have evoked considerable response from other countries.

While the United States and other countries' position has been generally positive, neighbouring China's initial response has been negative.

Home Minister Amit Shah's clarification in the Lok Sabha debate that J&K includes the whole of Pakistan Occupied Kashmir and Aksai Chin has triggered tremors in the northern neighbourhood.

China's foreign ministry spokeswoman responded quickly to the Indian legislation by stating that these measures are "unacceptable" and that her country "is always opposed" to such moves.

India's foreign ministry spokesman countered strongly by stating that India "does not comment on internal affairs of other countries and expects other countries to do likewise".

The reasons for China's negative response are located in its territorial dispute with India but also to its grand designs of dominating the region from its previous position of being merely a "balancer" between India and Pakistan.

It is also linked to the larger strategic issues in Asia.

Straddled with rising protests in Hong Kong, Taiwan, Xinjiang and Tibet, falling growth rates and against the backdrop of the debilitating tariff wars with the United States, China appears to be losing the initiative.

Diplomatic exchanges between India and China will take place on the issue.

Foreign Secretary Vijay Gokhale had already explained to the new ambassador from China on the Article 370 issue.

Foreign Minister S Jaishankar's visit to Beijing this weekend to prepare for the 2nd "informal summit" between the two leaders, forthcoming 23rd Special Representative meeting next month on the territorial dispute resolution, are likely to include discussions in the issue.

However, a repeat of mid-2000 Chinese boycott of talks on the Western Sector of the border is unlikely given the impact of Indian resolve during the Doklam events of 2017.

China's nervousness stems from its inability to stand on its own words on Kashmir.

In 1963 when China concluded a "temporary" agreement with Pakistan, it stated that "by the time Pakistan and India have solved the dispute over the ownership of Kashmir, the relevant sovereign authorities will renegotiate with the Chinese government so as to replace this temporary agreement by a formal boundary treaty".

That time has never come and on the other hand, China quietly began replacing such provisions in the 2000s and in the recent period blatantly began not only investing in the disputed Northern Areas but also deploying its own "security guards" in thousands in the region.

Also if the home minister's comments are extended to their logical conclusion on Aksai Chin (38,000 square kilometres), Aghil, Shimshal, Raskam and Shaksgam valleys of Gilgit-Baltistan (19,300 sq km transferred by Pakistan to China in 1963), then China has to rethink about its "flagship" programme of the Belt and Road Initiative, the China Pakistan Economic Corridor.

Scores of Chinese engineers, technicians, workers, and security guards are trapped in the area.

For instance, due to Indian Army's shelling of Neelum river valley in PoK, Pakistani press reported on July 31 that over 55 Chinese were evacuated for safety.

China's policy on Kashmir went through major transformations before as well.

In the 1950s Mao Zedong moaned over the "unnatural" division of India and Pakistan.

After waging war on India in 1962, however, China supported "self-determination" for Kashmiris.

Realising that this policy could boomerang among the Uighurs, Tibetans and Mongols who may be tempted to raise similar demands, China began since the 1980s voicing status quo policy and agreed with Indian position that this is a "bilateral issue" between India and Pakistan.

Premier Li Peng, who recently passed away, even suggested in 1989 that Kashmir should be resolved between the two countries based on Panchsheel principles and on friendly consultations.

During the 1990s, China advocated resolving Kashmir dispute based on Simla Pact and respect for the Line of Control, a move made after the Indian Parliament resolution in 1994 on Pakistan Occupied Kashmir.

There is another issue that China is worried about of opening up a Pandora's box.

Former foreign minister Sushma Swaraj, in her first meeting with Special Envoy and Foreign Minister Wang Yi when the new BJP government was formed in May 2014, stated that India followed the "One China" policy and enquired about the track record of China on "One India" policy.

While China extracted Indian compliance to its policies on Taiwan or Tibet, it has been non-committal on India's position on Kashmir.

On the other hand, China also at one time toyed with the idea of supporting Kashmir insurgents by providing material and moral support but gave up after the "stapled visas" fiasco in 2009.

The costs for China appeared to be exorbitant then as it is now in the background of J&K reorganisation. 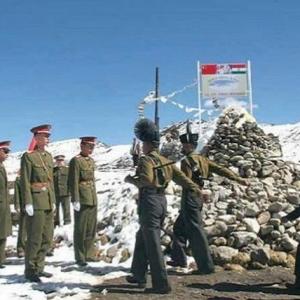