'Three successive failures can tarnish the image of invincibility.'
'Once this happens, Chanakya can fall prey to his adversaries outside and inside the party,' notes Amulya Ganguli.
Illustration: Uttam Ghosh/Rediff.com 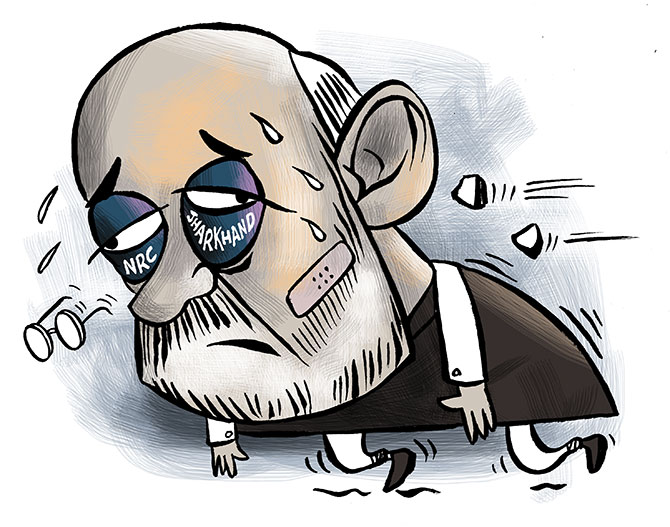 It has been a twin blow to Amit Anilchandra Shah, India's Patel 2.0 and the latest loh purush (iron man).

It's a toss-up which of the two blows has hurt him most -- the Bharatiya Janata Party's defeat in Jharkhand or the prime minister's virtual disavowl of Amitbhai's pet project, a countrywide NRC.

Probably the second because Amitbhai had set his heart on weeding out all the 'termites', as he dubbed illegal Muslim immigrants, from India.

The Jharkhand outcome, too, must have been disheartening.

But by now, the BJP must have got used to losing an election or two.

Besides, there is always the hope that a lost state can be won back by fair means or foul.

But the shelving of the NRC by Narendra Damodardas Modi is another matter if only because it has shown up Amitbhai as someone who had gone out on a limb on the subject.

Now, he has been left high and dry even after outlining an elaborate plan -- first re-enacting the Assam NRC because the first attempt had gone horribly wrong by identifying 1.2 million Hindus (!) instead of the 'termites' as it was meant to do, and then extending the exercise to the rest of the country.

But, now, Narendrabhai has said that there was no such plan; nothing was discussed or decided upon.

So, why was Amitbhai so emphatic about the NRC ?

Now that his plan has been shot down, will he be believed when he holds forth next time on a sensitive subject ?

The original loh purush wouldn't have found himself in such an unenviable situation.

As for Jharkhand, the setback there would have been less unsettling if it hadn't followed close on the heels of similar political reverses in Haryana and Maharashtra.

If anything, these tend to undermine Amitbhai's image as a modern-day Chanakya, whose strategies have fatal consequences for the BJP's opponents.

A reputation of this nature is built on continuing success.

Three successive failures can tarnish the image of invincibility.

Once this happens, Chanakya can fall prey to his adversaries outside and inside the party.

His cold stare will no longer strike terror into the hearts of critics.

The denting of Amitbhai's image has come at a time when the BJP is facing its first mass movement where its opponents have taken to the streets.

These are no longer the ivory tower intellectuals writing protest notes or returning awards, but earnest young people who tend to arouse sympathy.

It is to Amitbhai's credit that the BJP is hitting back by organising street demonstrations of its own and galvanising its own intellectual groups to draft missives in the government's favour.

But slogans like 'goli maro salon ko' do not endear them to the average onlooker.

So, the BJP's opponents can be said, therefore, to have won the first round in view of the government's decision to put the NRC on the back burner.

This is the first step backwards by the government in the last five-and-a-half years apart from the withdrawal of the land acquisition ordinances right at the beginning of Narendrabhai's tenure.

But that had an economic context.

But the retreat on the NRC is purely political.

That it took place even before the Jharkhand outcome is also significant.