'Modi cannot drag India back into a primitive epoch resembling the religious wars in medieval Europe and at the same time claim to represent the aspirations of modernity among Indians,' notes Ambassador M K Bhadrakumar. 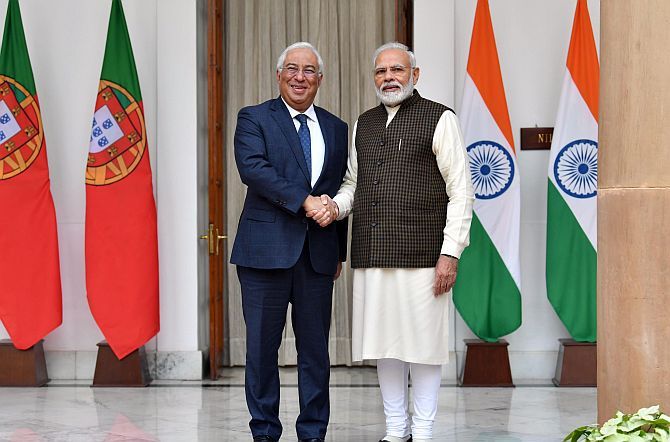 This has been an extraordinary period in India's equations with the international community.

The mass agitation against the Modi-Shah plan of action to impose the Citizenship Amendment Act and its follow-up, the National Register of Citizens, have caught world attention.

The international community is shell-shocked over India's degeneration into authoritarian rule under Modi's watch in such a short period of time.

When a democratically elected government shoots down dissenting citizens in cold blood and moves on nonchalantly, it causes a sense of revulsion in the civilised world.

The outside world -- the Muslim world and the Christian world alike -- tend to view the CAA and NRC as patently 'anti-Muslim' (external link).

Lacking erudition and world view, it is beyond the comprehension of the Modi bhakts to understand the complexities of the acrimony amongst Abrahamic religions -- Judaism, Christianity and Islam -- which has historical roots and is more like a family quarrel laden with overlapping passions of likes and dislikes, rapport and aversion, desires and insouciance.

Furthermore, despite the shibboleth being propagated by the Hindu fundamentalists, the fact remains that Hinduism as a 'religion', unlike the ancient Abrahamic religions, is of recent origin -- as recent, arguably, as British India -- and that it stands outside, looking in.

In his book Revolution and Counter Revolution in Ancient India (external link), Dr Babasaheb Ambedkar wrote, 'In the first place it must be recognised that there has never been such as a common Indian culture, that historically there have been three Indias -- Brahmanic India, Buddhist India and Hindu India.'

Ambedkar explained that the history of India before the Muslim invasions is 'the history of a mortal conflict between Brahmanism and Buddhism.'

Brahmanism, eventually, after its brutal victory over Buddhism, tried to cover itself in the garb of Hindutva.

It became synonymous with Hindutva.

It is not difficult to see why the Hindutva cannot expect ideological affinity with the rest of the world where Abrahamic religions are in vogue.

Equally, it must be underscored that the cascading alienation in the world opinion regarding the current violence and bigotry in India goes far beyond a matter of religion.

The point is, to quote Ambedkar again, 'Hinduism is a danger to Independence, Equality and Brotherhood. Thus it is an enemy of democracy.'

The Western world's reaction to the rage of Hindutva in India is absolutely in sync with what Ambedkar wrote.

Western opinion conflates CAA (and the NRC) with the murder of democracy in India.

Faced with such an avalanche of criticism from Western liberal opinion, the Modi government's discomfiture became apparent when Portugese Prime Minister Antonio Costa came to Delhi on a 'working visit' on December 19 on Modi's invitation to attend the second meeting of the organising committee on the celebrations for Mahatma Gandhi's 150th birth anniversary.

No doubt, it was a thoughtful decision on Modi's part to include Costa as the eminent 'organiser' of Gandhiji's 150th birth anniversary celebrations.

But that has become history, as the Modi government has forfeited the moral right to celebrate Gandhian legacy after the harshness with which protestors in BJP-run states are being suppressed, especially in Uttar Pradesh and Karnataka.

Costa landed in Delhi when parts of the city were rocked by violence and blood was spilt on Delhi streets.

The incongruity of the occasion needs no big explanation.

Costa's late father, Orlando da Costa, who hailed from Goa, was a well-known writer and Communist activist and freedom fighter who was incarcerated by the then brutal dictatorship in Portugal. (No Flowers No Wreaths, Orlando Costa's play, is set on the night of the end of Portugese rule in Goa in 1961.)

Costa himself is a Socialist who fought against populist and xenophobic discourses and other manifestations of fascism and takes pride in projecting his country as 'open to the world, with a cosmopolitan and welcoming society.'

In an interview with Hindustan Times (external link) two years ago, Costa said, 'In Portugal, there is currently no extremist right-wing party strong enough politically... The racist and xenophobic discourse has never scored high in Portuguese elections. On the contrary: our government stood ready to host more refugees than those who had been determined to Portugal according to our EU quota, and that decision was welcomed unanimously by all political parties and the society in general. This is why Portugal is today the fourth European country in terms of refugees welcomed in the framework of the relocation programme.'

BJP leaders do not realise that flaunting Montblanc pens or wallets, keeping silk handkerchiefs in their coat pockets or wearing Patek Philippe wrist watches do not make them 'modern'.

Modernity is a matter of the mind and intellect.

Modi cannot drag India back into a primitive epoch resembling the religious wars in medieval Europe and at the same time claim to represent the aspirations of modernity among Indians.

Simply put, Hindutva as an ideology is not contemporaneous with the 21st century.

It isolates India in world opinion.

This is the lesson out of the present-day churning.