China will cheerfully discuss human rights, environmental degradation and a raft of issues. But say the word 'Tibet' and the shutters come down, writes Ajai Shukla

A scholarly article in a Beijing newspaper has focused China's spotlight on a troubling British policy retreat that undermines the Indian claim that the McMahon Line forms the Sino-Indian border in Arunachal Pradesh. This took the form of an inexplicable statement from former British foreign secretary David Miliband in 2008, that back-tracked from Britain's long-held position that Tibet was autonomous before 1950, with China having a "special position" but not sovereignty over that country.

Miliband abandoned that position as an "anachronism" based on "the outdated concept of suzerainty". Instead, he announced, "Like every other EU member state, and the United States, we regard Tibet as part of the People's Republic of China."

Why is this vital for New Delhi? The McMahon Line was formalised between India and Tibet at the Simla Convention in 1914, and its legitimacy rests on Tibet's independence. Beijing argues that Lhasa was subordinate to Beijing and, therefore, not empowered to negotiate its borders. Miliband's statement could add weight to Beijing's argument. Chinese negotiators will say: the colonial power that negotiated the Simla Convention has wisely repudiated it.

What makes Miliband's retreat especially baffling is that London got absolutely nothing out of it, except for a mouthful from Beijing for interfering in its internal matters. Having already given away Hong Kong and forsaken Taiwan with a one-China policy, Tibet was the lone card in the British hand that mattered desperately to Beijing. But London gifted it away without any apparent strategic intent.

London was not alone in kowtowing to China in 2008, when the economic recession made the East wind appear to indeed be prevailing over the West wind. Nicolas Sarkozy, France's blustering former president, responded to China's brutal crackdown on Tibetan protesters in March 2008 by threatening to boycott the opening of the Beijing Olympics that August.

This led to a coordinated picketing of Carrefour supermarkets across China and an internet campaign that charged the French chain with funding the Dalai Lama. It was the first anti-European deployment of people's power, a weapon that had been perfected earlier against Japan. Beijing intervened only after a few days of carefully calibrated silence, and Sarkozy got the message. After meeting Chinese president Hu Jintao in July, he announced his attendance at the Olympics in the spirit of "peace, friendship and brotherhood".

Miliband's wobble and Beijing's skilful hardball raise two big issues for India. Firstly, is China's economic muscle reformatting foreign policy hard drives in Western Europe? This is especially relevant regarding the United Kingdom, where India's border claim has been impacted by the inconsistency of British policy making in the face of a resurgent China. Given the haste and secrecy that attended this policy shift, it appears that London's eagerness to please Beijing overrode the

New Delhi must immediately seek a public clarification from London, which would allow the British government to clarify that the pre-1950 position on Tibet remains unchanged. The big question is: "What is the UK's current view of its pre-1950 relations with Tibet, and in particular of the Annexures to the Simla Convention of 1914?" Meanwhile, New Delhi must urge London to recalibrate how it deals with a rising China, basing policy decisions on long-term considerations and not just immediate needs.

Secondly, India must re-evaluate its own Tibet policy. Having provided asylum to the Dalai Lama, the Central Tibetan Administration, a vibrant Tibetan clergy and a hundred thousand Tibetans, India is probably the world's only country with serious leverage in Tibet. Sadly, New Delhi bends over backwards to convince Beijing that India has no designs on Tibet. This submissiveness has yielded only disadvantages: the Tibetan presence in India cannot but make China deeply suspicious of India; while New Delhi's periodic clampdown on Tibetan refugee activity -- portrayed as a neighbourly concern for Chinese sensitivities -- leads Beijing to conclude that sustained pressure on India will make the Tibet card unplayable.

India must abandon this practice of dealing with China through concessions. Over thousands of years of history, successive Chinese rulers have seen concessions as a sign of weakness. The Chinese Communist Party wholeheartedly embraces this belief.

Another Chinese diplomatic tradition involves centring the public debate on relatively minor issues, while consigning the crucial central issues -- such as Tibet -- to the shadows. Robert Barnett of Columbia University, a noted Tibet and China expert, says, "My hypothesis is that we can understand Chinese diplomatic strategy better by regarding the things they make a big noise about as less important because they want to protect from public debate the really important things."

China will cheerfully discuss human rights, labour protection legislation, environmental degradation and a raft of issues that could well be fobbed off as "internal affairs". But say the word "Tibet" and the shutters come down. China's expansive claim over Arunachal Pradesh is hardly backed by history. But it is designed to keep the discussion off Tibet, an increasingly sensitive issue for Beijing as its thuggish militias fail in stamping out a deep-rooted identity struggle.

Rather than continuing to play by Chinese rules, where Arunachal is discussed but not Tibet, and while concessions like Miliband's reshape the ball game to India's disadvantage, New Delhi must begin raising the issue of Tibet in the Special Representatives' dialogue. As long as talks are about only the border, no settlement is likely. But by strategically repositioning the Sino-Indian dialogue, and shifting at least some of the spotlight onto Tibet, New Delhi can create incentives for Beijing to loosen its untenable positions. India has legitimate and non-provocative interests in Tibet: including the reopening of India's consulate in Lhasa that was shut down in the 1950s; border trade; religious linkages; tourism and people-to-people contacts.
Ajai Shukla
Source: 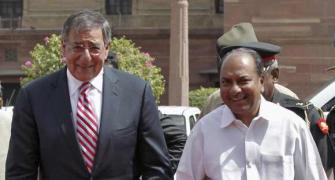 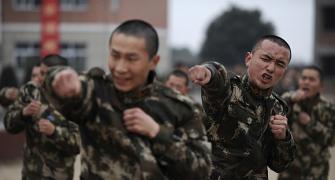 Why India must be prepared to face China militarily

US search mission in Arunachal: How will China react?