News
Business
Movies
Sports
Cricket
Get Ahead
Money Tips
Shopping
Sign in  |  Create a Rediffmail account
Rediff.com  » News » How to prevent another 26/11

'The government must covertly eliminate the leaders of terrorist organisations abroad so as to eliminate the problem at its roots,' recommends Brigadier Gurmeet Kanwal (retd). 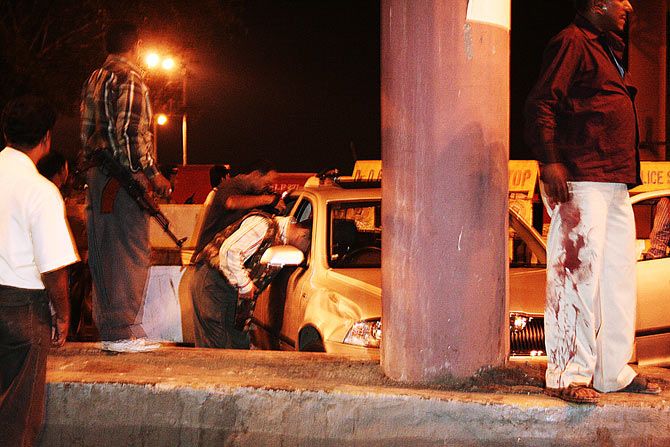 IMAGE: November 26, 2008, after midnight: After terrorist Ajmal Kasab's capture, a team of policemen check the Skoda Laura that he and his accomplice commandeered at Nariman Point and drove down Marine Drive. Photograph: Uttam Ghosh/Rediff.com

On the occasion of the tenth anniversary of the Mumbai terror attacks, many column inches of commentary have appeared in print and numerous discussions have been telecast by the news channels. The broad consensus that has emerged is that the response was slow and laborious and poorly coordinated among the central and the state governments and their various agencies.

Coastal security was virtually non-existent; the marine police were too few in number to effectively patrol the vast area entrusted to them; they were ill-equipped and inadequately trained; and, there was poor coordination between the coast guard and the marine Police. It took far too long to begin flushing out operations and then eliminate the nine terrorists who were holed up at three separate locations. 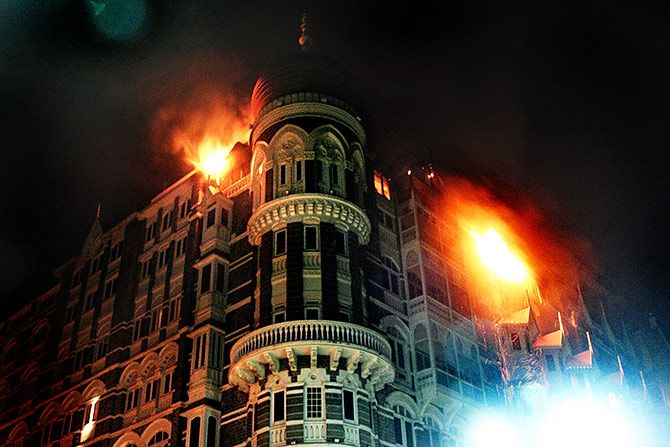 IMAGE: November 26, 2008, Fire erupts from the Taj as terrorists set fire to parts of the hotel. Photograph: Uttam Ghosh/Rediff.com

However, the question that needs to asked is whether anything much has changed materially to inspire national confidence that the next such terror strike will be nipped in the bud and if it does unfold, whether it will be quickly brought to an end.

Even though recent terrorist strikes have been sporadic and have been spaced out in time, the overall impression that prevails is that of an unstable internal security environment in which the initiative lies with the terrorist organisations and they are able to strike at will.

The government needs to review its largely reactive policies and adopt pro-active measures to fight terrorism, particularly the variety that emanates from the soil of inimical neighbouring countries.

The government must formulate a comprehensive approach to fight terrorism, and all organs of the State must come together to implement a national-level counter-terrorism strategy.

The government must draw up a strategy that is inter-ministerial, inter-agency and inter-departmental in character. Such a strategy must also balance the interests of the central and state governments. 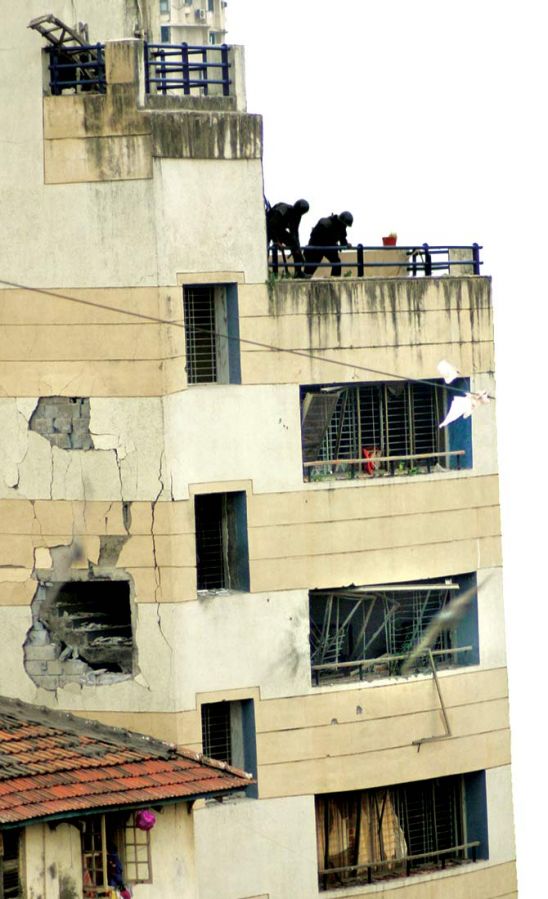 It must be ensured that the counter-terrorism policy is based on strong but egalitarian laws. India's experiments with POTA, TADA and UAPA have failed to deliver the desired results.

Laws must be just and humane and must not be designed to either be vindictive towards or shield any particular community or religious denomination. The experience of many other countries has proved that it is possible to formulate strong yet egalitarian counter-terrorism laws.

The US established a powerful department of homeland security following the 9/11 strikes and there has not been a major terrorist attack since then.

One major lacuna in India's approach to counter-terrorism is the gross disconnect between how the central and state governments view counter-terrorism. There are glaring disparities in the views held in Delhi and the state capitals.

The Constitution must be amended to move 'law and order' from the State List to the Concurrent List so that the central government can act on its own initiative when necessary, particularly in the case of externally sponsored terrorism.

And it is time the government bifurcated the internal security function of the ministry of home affairs into a separate ministry headed by a Cabinet minister.

Besides prevention through accurate 'humint' and 'techint' intelligence gathering, successful counter-terrorism requires effective intelligence penetration of terrorist groups so that their leadership can be systematically neutralised by an empowered anti-terrorism agency.

Comprehensive planning and better stage management are necessary for the real-time elimination of a group of terrorists during a strike while the terrorists are still on a killing spree.

Though the Cabinet Committee on Security gave its approval for the establishment of a National Counter-Terrorism Centre following the Mumbai terror strikes, seven chief ministers virtually vetoed the NCTC on the grounds that its functioning would undermine the federal structure of India's Constitution and that it must not be placed under the Intelligence Bureau.

The strong opposition came despite the then prime minister's assurance that 'It is not our government's intention to alter distribution of power between states and Centre. The NCTC is to coordinate counter terror measures, and not to infringe on state powers.'

The opposition was strong despite the fact that the structure of the NCTC approved by the CCS was a watered down version of the form in which the NCTC had been originally conceived by then home minister P Chidambaram. 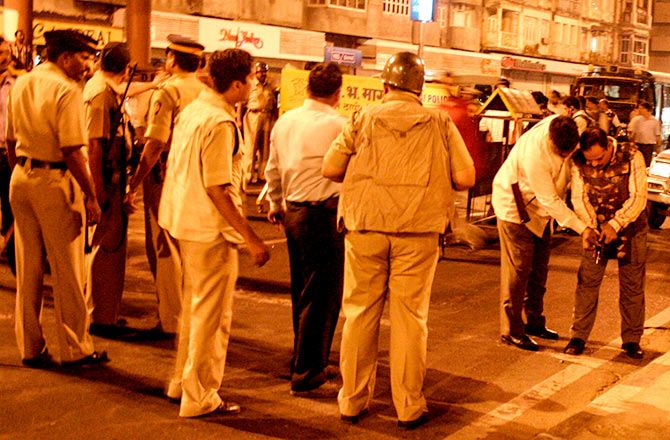 The NCTC had been envisaged as an umbrella organisation which would exercise control over agencies like the National Technical Research Organisation, the Joint Intelligence Committee, the National Crime Records Bureau and the National Security Guard.

According to the proposal, the NCTC was proposed to be placed under the IB and the existing Multi-Agency Centre was to be subsumed in it.

The NATGRID (National Intelligence Grid), which was approved by the CCS in June 2011, was expected to provide a data bank of 20 database like travel records, immigration details and income tax records as inputs to the NCTC. 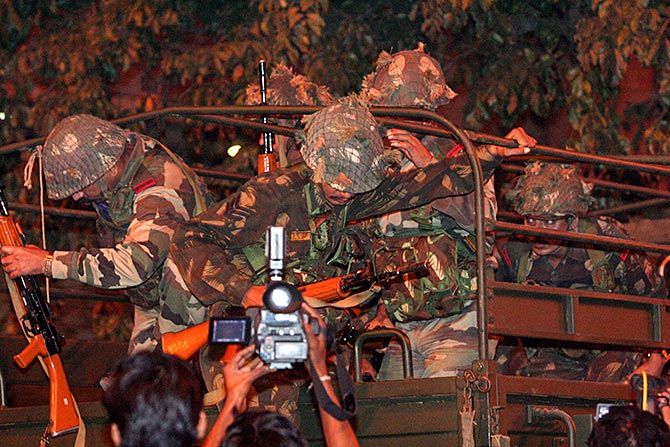 Though it was never established, the concept had some major lacunae. Unless the NCTC is empowered to conduct counter-terrorism operations like its US counterpart, on which the Indian version was expected to be based, urban terrorism will continue to remain a cause for concern.

Without an effective NCTC or a similar organisation, the planning and execution of India's counter-terrorism policies will remain mired in systemic weaknesses.

Post-incident investigation is aimed at unravelling the identities of the planners and the plotters and bringing to justice the perpetrators of the incident of terrorism.

The National Investigation Agency, which was set up and which has now had several years of experience, must be reconstituted as it lacks teeth in its present form. It should be re-modelled on the US FBI to give it both preventive and investigative powers.

While there is no need to blindly ape any country, there is no harm in learning from the best practices abroad and incorporating them into Indian policies. 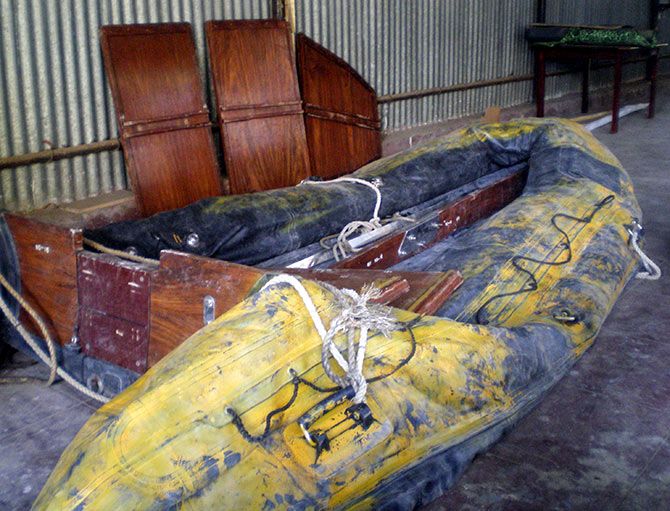 IMAGE: The boat the terrorists used to arrive on Mmbai's shore on November 26, 2008. Photograph: Vaihayasi Daniel/Rediff.com

India's intelligence coordination and assessment apparatus at the national level and counter-terrorism policies remain mired in the days of innocence. We are now living in the age of 'new terrorism' that is far more violent and diabolical than before and policies must keep pace with the emerging developments.

The government must enlarge the scope of its counter-terrorism policy to covertly eliminate the leaders of terrorist organisations abroad who are actively engaged in sponsoring terrorism in India so as to eliminate the problem at its roots, especially as the neighbouring countries have not been willing to bring them to justice. 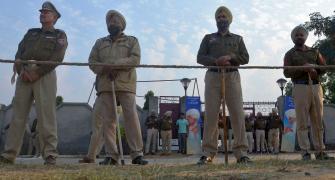