News
Business
Movies
Sports
Cricket
Get Ahead
Money Tips
Shopping
Sign in  |  Create a Rediffmail account
Rediff.com  » News » How our liberals have been working for Modi

'The Indian Right can afford to be rigid; but as liberals, our position has to be one of constant evolution, or else death awaits us,' argues Sreehari Nair.
Illustration: Uttam Ghosh/Rediff.com 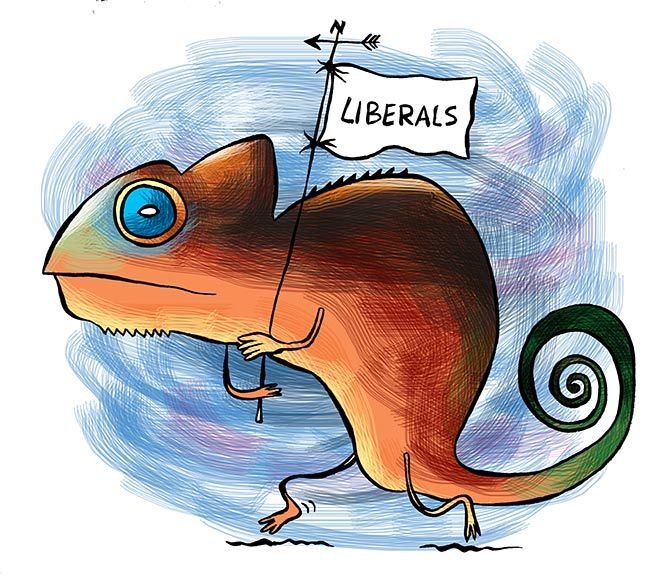 O Beautiful India, for all the Right Wing-bashing, for all the Modi-hating, is there another place on Earth where so many liberals of good taste and an unabashed love for the word 'progressive' have worked tirelessly to make conservatism fashionable as within thy blessed borders?

I doubt it seriously.

Every socialite, who condemns lynching of humans, does not blanch, not for an instant, when calling for the permanent liquidation of a man who's merely accused of a minor sexual transgression.

The peaceniks on Twitter talk 'polarisation' and 'divisiveness' the entire time, but they don't know any more about the mental make-up of an average Modi Bhakt or what happens at an average RSS shakha, than they know about the Trumpettes, the American Neo-Cons, the Putinites, or the Korean People's Army.

Why should they care?

Every editor of liberal persuasion who puts out dissertations on Nuanced Thinking is simultaneously engaged in the publishing of articles with click-baits that open to nothing.

'Oh... oh... he just happened to be at a restaurant launch where the head chef had diced an onion in his presence.'

No sooner have these vacuous headlines -- the equivalent of sexual temptation that goes nowhere, much less a proper climax -- done their work, than the Listicles kick in.

And can there be a better metaphor for Boutique Politics than these pretty Catalogs of Void?

The subtle fact that seems to have escaped our card-carrying liberals is that the Right Wing today (and this may just be a global phenomenon) is not the Avatar of Evil as much as it represents regularity, conventionality, a general disdain for complexity, and lack of imagination.

The Right Wing approach (everything from the policies to the marketing material) suggests that a country might do better if its citizens aren't too imaginative than if *they are imaginative.*

And when the best response you can expect to one your pieces is, 'Mr NP, I think you should've included Mandakini in your list of The Scariest Bollywood Smiles,' you have, in effect, put the Right Wing agenda into working practice.

The rabid BJP supporters on my Facebook list have become so confident of an uninterrupted reign that they have stopped parading their leader's achievements and started sharing cat videos.

And so the best hope we can cultivate at this juncture is that a sense of cuteness may have crept into them as well -- that, soon, inanities such as Flower Power and Free Love may take hold of these Lotus Backers, too.

This, then, is what it has come down to -- the bare truth: We have become Less Hip as a nation.

There's a sad reality that the election results won't point you toward: That we are, today, a country of Conservatives and Anti-Conservative Conservatives.

Less aligned to the concept of beauty.

Ones who act like they have all the answers given to them in advance.

Ones who don't care about addressing tough questions.

Norman Mailer, on one occasion, had propounded: 'A Conservative is somebody who doesn't like questions that take more than 10 seconds to answer.'

It's an incisive thought, for a mind ready to make the leap.

Now try overlaying Mailer's theory to the whole brouhaha that happened last year, when a bunch of left liberals pounced upon Tavleen Singh for proposing that, perhaps, their holy grail, the #metoo, needs re-evaluation.

Tavleen had suggested that the whole movement may have created permanent rifts between men and women, and spawned a generation that wants to be 'babied all the time' -- and for her this prognosis, she was mocked at and kicked around.

Who's the Liberal, now?

Who's the Conservative? Who's to say?

If panic and exhaustion are the dominant feelings in the Indian Liberal Camp today, then it's a sign that these times are urging us to exercise greater discipline of will.

For if India is to, indeed, change its political course, what it needs to do, first and foremost, is move in a new psychic direction.

When I say we need a new script, what I mean is that we need to get the ground ready, to have as our leader, a person with the qualities of a film's leading man.

What we liberals must battle immediately, and battle with all our might, is this manufactured image, now popular, of the Indian leader as an ordinary soul whose standout qualities are humility, dependability, soberness, prostration before the glories of the Republic, and, a deep (!) commitment to celibacy.

In turn, what we ought to make attractive is the image that of a leader who is interested in the opposite sex, who understands the pleasures of good art, who doesn't have his or her answers prepared in advance, and who, if need be, can regale an audience with trash talk.

But then how, O Liberals, with your peddling of asexuality (I haven't encountered a generation like this one -- of youngsters who proudly say, "I don't get any action"), with your contempt for nuance, with your general humourlessness, and with your endorsement of this almost Victorian theme of 'Honor and Shame,' can such a Prime Ministerial Ideal be created?

If the new Indian Leader has to appeal to our Senses, if he has to be a development from the Outlaw, if he must possess the charisma of a Matinee Idol, then we too must Become Hip.

And Being Hip is a state of mind: A way of receiving information; and of processing it.

Too much breath has been wasted, of late, on making people conform to the charters of small interest groups and trending topics.

We need to make living by one's wits, cool again -- as also living in a world of sensations, interesting.

We must investigate why so many of us feel so dead inside; and see our condition as a result of our lack of imagination, brought about by those enormous institutional systems of greed and their rather benign manifestations.

We must understand that a solution that works at one place may not work at another.

And accept, we must, that when we try to say all the right things, all the time, we are essentially 'contradicting ourselves at levels we are not even aware of.'

Case in Point: A certain extreme liberal who, at this present moment, is parallely campaigning for the abolishment of capital punishment and for the trial-free execution of any person charged with rape.

If this is a fight against homogenisation, a fight to excavate the potential extraordinariness that resides within each individual Indian, then our guardians of mass media must also learn to swim in each other's pools.

Our movie critics must become conscious of their duty as social critics.

Our political analysts must be aware of what our Dream Merchants are selling -- and how their goods affect political discourses.

Our economists must become better psychiatrists.

Our sports writers ought to be more than just vapid analysers of success and of the next big kid on the block -- they must also be splendid chroniclers of heartbreak; poets capable of hailing talents, yet unfulfilled.

And our stand-up comedians, arguably the chief proponents of self-righteousness in this land, must put more on the line -- more than just petty observations; their routines must offer us a preview of their ego, their wounds, their assholery, their guilt.

This crossing over, this pushing of boundaries, this passing into mysterious realms, must extend, also, into our attitude toward the Right.

The widening gap between the Indian Left and the Indian Right, the lack of conversation between a Modi supporter and a Modi detractor, the broad snigger that now separates the two sides, all work to the benefit of the Right.

The more straight hate we give them, the better they would grow.

The more we slam them from outside, the better their internal structures would bind.

So let us study the rituals of their temples and subvocalise the paeans that are offered to their deities.

Let us dissect their engines of slow poisoning and lay bare their working parts for everybody to gaze upon.

A lot of what happens in their camp is genuinely good: Let us not stop ourselves from giving the devils their rightful due.

We need to understand that our crusade is, obviously, more difficult than theirs; and to give potency to this understanding, let us hand them the respect that they aren't naturally wont to handing us.

The political revolution that we are waiting for would not occur without a set of social and cultural revolutions -- as also, an acceleration of the Indian consciousness.

The times may weigh us down; and yet, what opportunities lie ahead of us: For the small details of our conduct, our commitment to expanding horizons, to getting to the depth of complex issues, to honestly presenting our most private experiences, are all going to count, as much as our vote, 5 years from today.

Has there ever been another period in Indian history, when our use of language, our dedication to making language more artful (Too many puns can be distracting; easy adjectives, constricting; and alliterations give our shallowness away), could decide if a whole generation acted imaginatively or not?

At the heart of all this, however, is a truth, in equal parts, sad and invigorating: That some of our old values, and our nostalgia for seemingly simpler times, would not matter in this fight -- for we are protectors of democracy.

And there's nothing automatic or theoretical about the preservation of democracy.

It's not said without thought that Fascism is a more natural governmental condition.

Fascism, after all, goes back to our childhood when we were told what to do, what not to, and how to think.

Democracy, however, requires us, and everyone around us, to get better, freer, and more illumined than our yesterday's selves: Any other way, and the spirit of democracy dims out.

The Indian Right can afford to be rigid; but as liberals, our position has to be one of constant evolution, or else death awaits us.

So before you blame 'them' for sweeping issues under the rug through logical niceties, remember this: what 'we' need is a Spiritual Housecleaning. 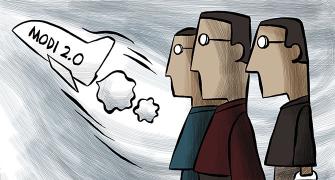 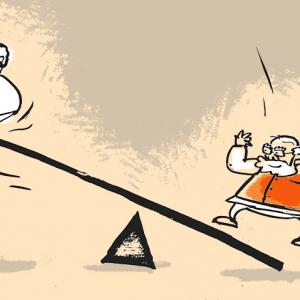