Effects of Modi 2.0 are not all only political. Or economic. Or religious. It can affect individuals, big and small, in unexpected ways and some are literally left behind.

This realisation hit me in the bar of Delhi's prestigious India International Centre, when I went in recently for a mid-afternoon nimbu-soda on a scorching Delhi summer day. Slumped in a corner, looking desolate and nursing a beer was a veteran journalist whom I knew well from my working days as a Foreign Service officer.

"Arre, you are here, aren't you covering the SCO summit in Bishkek?" I had to ask.

"Cover, how?" he asked grumpily. "You are retired, I know, but you should know that the days when we were taken to cover visits by PMs are long past..." he elaborated.

"That, I know," I replied. I was aware that even in Modi 1.0, the practice of carrying a planeload of journalists for the PM's travels abroad, known and accepted as junkets, had been scrapped.

Starting in 2014, only the official media -- All Indian Radio, Doordarshan, PTI etc -- was 'carried' as the phrase went. Others were left behind. Their much envied opportunities to globetrot, sightsee, and duty-free shop, all on an organised tour by the Sarkar had vanished overnight.

Much whiskey had flown in Delhi's press club discussing this injustice that had been perpetrated. But to no avail.

"But you should be covering the event in terms of writing about it. PM is meeting the Chinese and Russian presidents and not meeting Imran Khan. Isn't all that news?" I had to ask.

"Things have changed since your time, my friend," he replied, kindly, but rubbing in my retired status.

"These days, they do a running commentary on TV on such summits. TV moguls send 20-something reporters at the channel's own expense, can you believe it, to the locales and these youngsters talk about the body language of each hug or handshake, and analyse its strategic significance," he said with the cynicism of the senior citizen.

The new order cometh, sweeping out the old, as history tells us. It includes 'History' too, and certainly historians.

Any reasonably literate Indian should know a little about the convulsions that have shaken and continue to reverberate within the Indian historical establishment, but that is a topic for another day.

Spurred by this thought, I began to ruminate on something that is more familiar to me -- the practitioners of the discourse on the changing world order and India's place within it. A mouthful?

I am referring not so much to the policy as such, more to the persons involved. 'Change', with a capital C, that we are witnessing with summitry, as a point of reference.

During my time in the foreign ministry, not so long ago -- but it already seems distant -- the major summits were really big and benign. The annual jamboree at the United Nations every September with nearly everyone in the so-called comity of nations was the pinnacle of summitry.

The first few days, with the American president too in town, brought Manhattan to a standstill and ordinary delegates like me had to trudge by foot to get to the UN headquarters.

Apart from covering our own PM, the journalists wanted and waited for some drama: An Arafat, a Castro, a Chavez or at least an Ahmadinejad saying something courageous or outrageous.

Next in the order of summitry came the holy cow of multilateralism, the Non-Aligned Movement, intimately known to us as NAM, where we had a sense of ownership.

A summit every four years with more than half of the UN membership present. One would have thought that everyone was on the same side at NAM; after all, they were not a part of the hot or cold war, but no, there were serious disputes within them.

Think Iran-Iraq, Morocco-Algeria, Ethiopia-Eritrea, not to mention the mother of all quarrels, India-Pakistan.

Much ink was spent, perhaps small forests were lost to make the paper that we consumed for the communiques, but junior diplomats got their first training in conference diplomacy, on one of its numerous committees.

Lower in importance, but not so seen by the Brits, was the hugely irrelevant Commonwealth summit, every once in a while. I forget its frequency.

Long on ceremony and short on substance, but in exotic locales where everyone understood English.

Then there was the annual headache of the SAARC summit -- invariably a set piece drama for demonstrating either stopping or starting the India-Pak dialogue, yet once more.

Other neighbouring countries were bored or irritated by this recurrent charade, but they had to endure.

We officials accompanied the political leaderships for all these. Journalists and other freeloaders joined the caravan.

The poorer the country, the larger the banquet.

At the UN or the Commonwealth secretariat in London, you could not even get a cup of coffee free.

At the NAM summit in a locale in Africa, the table groaned with shrimps and sweetmeats!

All these forums have remained, I noted, but our priorities have changed.

More than UN, we now pay attention to the G-20, select and potent. Instead of NAM or Commonwealth we focus on SCO, BRICS, BIMSTEC or even Quad. What are these? I know only vaguely: New structures that are small, selective, focused and instrumental.

It is no wonder that instead of old-style generalist journalist, we now have subject experts.

Think of the devil and there he was. An eminent 'strategic expert' of yesteryear was making his way to our table, apparently with plenty of time on his hands. This was an academic with a great reputation on 'Third World issues' in the days gone by.

He too was a standard fixture at some of the summits that I have described and he was often an invitee, with all expenses paid, by the host country or an international foundation.

A toast of the NGO circuit, he knew both me and the veteran journalist.

He too had been left behind by Modi and modern India, I realised soon. "I must change the name of my institute," he lamented. "Nobody, respects The Indian Institute of Third World Studies any more. It seems to have a bad odour and some even in our own camp laugh, when they hear my designation. Can you suggest some alternative names?" he asked.

"Well, try 'Indian Institute of Strategic autonomy' or 'Centre for Analysis of India as a Leading Power', I suggested, half seriously. He took notes.

The process of reinvention was beginning in front of my eyes.

"Will Modi get a media adviser?" the journalist asked both of us. Old habits of ferreting out information about the PMO, no doubt, persisted.

"That era is gone, it seems," I replied. "Have you not heard of Twitter and Mann ki Baat? It is all social media and direct messaging."

"And no gossip over beer either..." he laughed bitterly, as we ordered another round.

B S Prakash is a former ambassador of India and a Rediff.com columnist of long standing. You can read his earlier columns here. 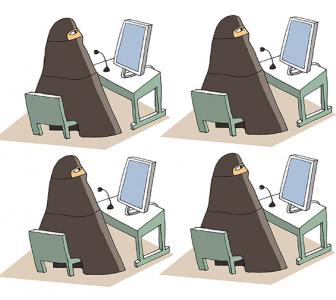 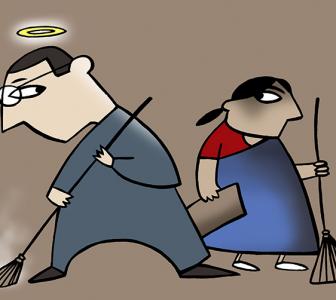 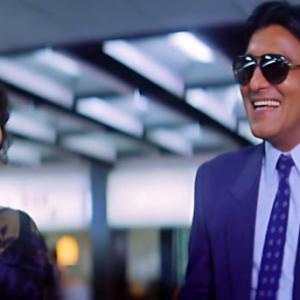