The momentum created by the landslide victory of the ruling party should be utilised to carry forward reforms in the legal field, says M J Antony. 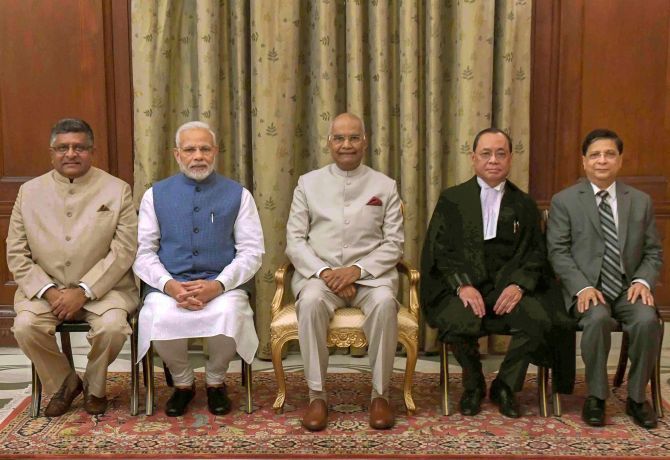 The new government is in place and the nation is waiting for unravelling of the promised hundred new steps like Digital India, solar energy and space flights.

One area that cries for attention is the venerable judiciary.

The higher judiciary has undergone a traumatic period in recent years.

While finance, telecom, energy and other sectors have lobbyists galore, judges have no power brokers to advance their cause. They have to take largely what comes to them and defend their independence, sometimes coming out openly.

It is their constant grievance for years that the third estate is not getting its due in the budgets. The average provision for this vital sector is a miserable 0.2 per cent. The coming budget should see that it is raised to a respectable level.

Judges have lamented the condition of infrastructure of courts in judgments as well as from public platforms with little impact on successive governments.

The next serious problem is the persistent discord between judiciary and the executive. It has delayed appointment of judges at all levels.

Though the Supreme Court now has its full strength of 31 judges, for the first time in recent decades, vacancies in the high courts and subordinate courts are staggering.

There is no consensus on the mode of appointment and transfer of judges. The collegium system devised by the Supreme Court is not acceptable to a large section of the legal profession.

The powers of the Supreme Court need a second look after examining its working in the past decades. The court was conceived as a constitutional court by the founding fathers.

But it has become largely an appellate court.

In the past three months, scores of judgments delivered by the Supreme Court dealt with partition of property, tenancy disputes and service matters. While deciding these issues pending for years, judges have little time to take up hundreds of old constitutional cases.

Scores of new appeals add to the deluge every week. Special leave petitions, which are routinely filed against judgments of the high courts and tribunals, take up most of the time of the judges.

Therefore, the long-standing demand for a constitutional court is urgently necessary, even if it requires amendment to the statute.

Recent events in the Supreme Court have highlighted the need for a workable procedure to deal with allegations against judges. Impeachment has proved to be impractical. Therefore a procedure should be laid down by law to tackle such situations.

Chief Justice of India Ranjan Gogoi has warned that it would be difficult to get quality judges if they have to face trumped-up charges.

One of the legal aspects of 'ease of doing business' is arbitration, which has been found to be inadequate to attract disputing parties. International arbitration now invariably goes to foreign centres.

Domestic arbitration is caught in procedural tangles which last years. An ordinance to make New Delhi a preferred centre for arbitration is presently under challenge in the Delhi high court.

It is therefore of utmost urgency to speed up arbitration process by setting up sound institutions and professionalising this alternative dispute resolution mechanism.

Though there are a score of tribunals which deal with economic matters, many of them are functioning with much less than the required number of members.

Some of them are even topless.

Therefore, appointments to these quasi-judicial institutions should get priority. The National Company Law Tribunal and its appellate body are active but half of more than 12,000 cases filed are reportedly waiting in the queue.

The competition law also needs a second look in view of wrangles over mergers and amalgamations.

This indeed is a tall order. However, the momentum created by the landslide victory of the ruling party should be utilised to carry forward reforms in the legal field.

It has been neglected far too long.