News
Business
Movies
Sports
Cricket
Get Ahead
Money Tips
Shopping
Sign in  |  Create a Rediffmail account
Rediff.com  » News » The real threat to the judiciary is from within 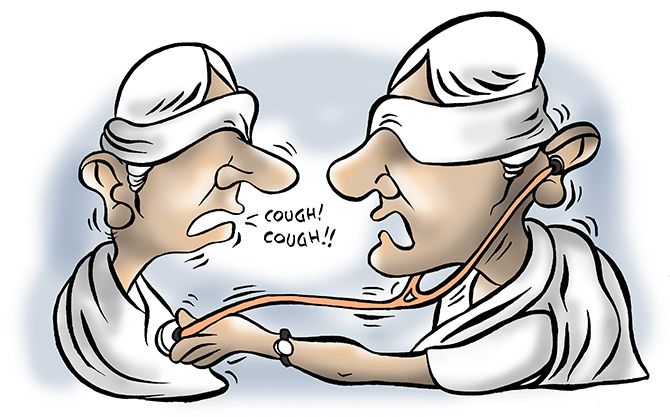 Basu Bhattacharya's 1971 film Anubhav, the first in his trilogy on marital discord, features Sanjeev Kumar as a workaholic editor and Tanuja as his lonely wife. After all is dusted and done through two-and-a-half intense hours, with Dinesh Thakur completing the triangle of tension, comes a dramatic final exchange between the couple.

'You write editorials each day for everybody else's problems. Will you write one for ours too?' Tanuja (OK, millennials, Kajol's mom) asks Sanjeev Kumar.

Picture your eminent Supreme Court judges in a similar situation.

Last month saw them deliver a judgment of rare clarity, and bombast-free passion.

Throwing out public interest litigation demanding an independent inquiry into judge B H Loya's death in Nagpur, Justice D Y Chandrachud, writing for the three-judge Bench headed by Chief Justice of India Dipak Misra, lambasted the petitioners and their lawyers for making scurrilous allegations without a 'tittle of proof', scandalising and thereby undermining the entire judiciary.

The rejection of the petitions apart, the rage in the judgment came from wanting to save the judiciary from lawyers, activists, the media, and other busybodies.

It looks like everybody is beating on the judges and they are fighting back.

I am being overly cautious in developing this argument, and I had better be.

Because, the judges said they were being large-hearted in sparing the very eminent Loya case lawyers and petitioners from criminal contempt. A mere editor may not get the same generosity going ahead.

Facts, however, have to be stated, and debated.

This isn't the moment to discuss the merits of the judgment itself. It is very well argued and stated with brevity not seen in most Supreme Court orders lately.

In these polarised times what you make of it also depends on where you stand politically or ideologically.

It's perilous to talk nuance as you will then be abused by both sides.

It is enormously more troublesome, however, when the higher judiciary looks and sounds similarly polarised.

That's the real threat to it, from within.

That's what the judges should be angry about.

That's why the judiciary needs to be saved from the judges.

There are no individual villains here. Just that while it tries to shoo away what it sees as outside viruses, the institution itself is caught in an awful auto-immune disease.

You know, when a body starts to eat itself.

You can't but agree with the larger points made in the judgment.

First, that PIL is being misused.

People have made careers out of bringing political, individual and ideological fights to court, wasting their time and contributing to delays.

Second, that judges don't lie -- at least not four of them together.

And third, that it is preposterous to say that one man controls the entire judiciary. It is an impossibility.

Now, some fact-checking. On the day this judgment was delivered, the morning's newspapers reported the Bombay high court imposing water-use restrictions for IPL matches in Maharashtra in response to an earlier PIL.

Forget the worth of the water thus saved for the farmer by starving a playground. Is it really worth the honourable court's time to pronounce on a PIL petition on a cricket league when it has many important cases?

You must never impute motives to the judges' actions even as you question their wisdom.

The Loya judgment said PIL had become a 'facade' for people seeking publicity. Would the judges look in the mirror and ask themselves if they haven't been falling for the same temptation?

My colleague Maneesh Chhibber, who is a most avid and insightful watcher of the higher judiciary, has helped me compile a short list of the more interesting examples besides, indeed, the BCCI (Board of Control for Cricket in India), which now has left the Supreme Court governing Indian cricket for more than a year with no end in sight.

Recently the CJI, who now heads the cricket Bench (heard any such in a constitutional democracy?) also admitted another PIL petition on the side, seeking to legalise betting and gambling in sport.

Justice Misra, before he became CJI, had ordered (on November 30, 2016) that playing the national anthem be made mandatory in cinema halls, only to rescind it much later.

Each of these petitions made headlines. Nobody remembers the names of the petitioners. So why blame them alone for headline-hunting?

Even the morning after the Loya judgment, 12 of the 43 cases on the CJI's list were PIL petitions.

A few more: The PIL petition to bring the Koh-i-Noor back from Britain, another to ban Santa-Banta jokes, to criminalise porn-watching (eating into the court's time since 2013), to make yoga compulsory in schools, and so on.

Some of these were eventually dismissed. Why these were admitted, with such a huge pendency and so many citizens waiting on issues of individual liberty, is a question we ask.

The fact is, since the eminently noble idea of PIL as the citizen's last resort originated in the mid-1980s, too many judges have extended its reach and range and in the process stretched their jurisdiction and powers.

This often walks them into the executive domain of messy day-to-day governance with no exit.

In the capital, the court set up an empowered committee to improve air quality 20 years ago. It continues to date, having transcended the tenure of 18 CJIs and the air has only become more noxious.

The same goes for the court's committee on illegal constructions and encroachment in the capital.

In either case, the court can't admit failure and dismount the tiger. But people blame it instead of the politicians and it suits them fine.

PIL is being overdone, but not just by publicity-seeking activists. Judges are part of the problem.

The second principled point was, judges don't lie. At least not four senior district judges together.

Does the principle not apply to the four senior-most judges of the Supreme Court who have been raising some substantive points of judicial governance for months now?

Is their word to be discounted as motivated and their concerns dismissed as misplaced while we take the four Maharashtra judges on their word?

I am not stupid enough to insinuate the district judges are lying. I will have to be insane to believe the top Supreme Court judges are. Their questions need a response, debate and introspection.

This relentless stretching of jurisdiction, the judiciary's tendency of headline-hunting through the same PIL petitions they decry as pestilence, and their inability to get their own house in order have weakened the institution more than any outsiders.

When the judges seem so divided, you would expect litigants and lawyers to go forum-shopping.

More importantly, you will have the executive play games with you, holding back your own appointments while you try cleaning the air they breathe and run the game of cricket.

Some tension among institutions is healthy. But if one becomes too weak, another will muscle its way into its space.

That's exactly what is happening now. The top judges are squabbling, and the politicians are laughing.

This brings us to the third key point in the judgment -- that it is preposterous to say that one individual could control the entire judiciary.

In principle, you can't dispute it. In reality, we have seen that come to pass.

Except that it wasn't a man, but a woman -- Indira Gandhi.

The courage and spine of just one great judge, H R Khanna, then saved us from becoming like Erdogan's Turkey today.

The India of 2018 needs not just one but several such because the pre-eminent threat now isn't just from outside but from within. 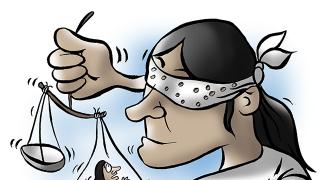 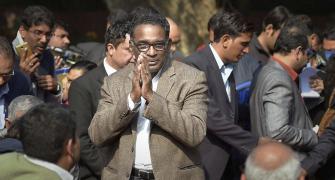