The NSA will meet with officials of the French external intelligence agency to forge a very close counter-terrorism relationship with India, reveals Rajeev Sharma. 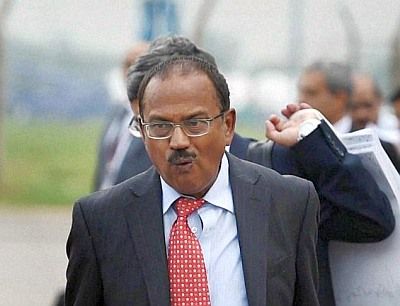 National Security Advisor Ajit Doval is headed to France for some urgent security and strategic business. He will be in Paris on Monday.

Of course, French President Francois Hollande is the chief guest for the Republic Day parade where, in a first, a strong contingent of the French army will take part in the parade. The subject will inevitably come up for discussions as Doval is expected to call on Hollande.

But this is not the real purpose of his visit to Paris as the nitty-gritty of the French presidential visit to India is being closely followed up by the ministry of external affairs.

Of course, the government-to-government deal between India and France for 36 Rafale fighter aircraft in fly-away conditions is on the anvil.

A high-level French team is already in India to give final touches to the agreement and French Defence Minister Jean-Yves Le Drian is expected to be in India a week later to oversee the final preparations of the mega deal.

But again, this is not the real purpose of Doval's visit to Paris as the Rafale deal is being handled by the defence ministry.

The main objective of Doval's Mission Paris is two-fold.

One, to impress upon the French strategic establishment to forge a very close counter-terrorism relationship with India and share real-time intelligence on terror outfits, including Islamic State which recently wreaked mayhem in Paris.

Two, to have brainstorming sessions with French intelligence and counter-terrorism establishments, which has acquired special importance in wake of the Pathankot terror attack.

The first one is already happening, but Doval's visit will certainly galvanise intelligence and counter-terrorism cooperation between India and France.

It is the second one which constitutes the major thrust area as far as Doval is concerned.

The Modi government, particularly the NSA, has drawn severe criticism from the Opposition and some strategic experts. Comparisons have been made between Pathankot and the Paris terror attacks and the response mechanism of the two governments.

Questions have been raised as to why the Indian security forces took four days to neutralise six terrorists when the French authorities tackled multiple simultaneous terror attacks in Paris and neutralised all terrorists in two hours.

Doval would also be mindful of this fact though the terror attacks of Paris and Pathankot were drastically different, the essential difference being that while the first one was at public places, the second one was at a closely guarded airbase which is one of the biggest military facilities of India.

Given his rich experience in handling operations of the Intelligence Bureau for decades, Doval will obviously be looking minutely at the French system and the good things that the Indian security establishment needs to learn from them. The French authorities' recent laudable role in dealing with the unprecedented and audacious terror attacks in Paris will be closely studied by Doval.

There is a political message in Doval's visit to France -- that he continues to be the go-to man for Prime Minister Narendra Modi. There is no other person Modi trusts so much as he trusts Doval.

Doval's France visit has the PM's blessings which shows that Modi has rubbished all anti-Doval statements that started days after Pakistan-based terrorists attacked the Pathankot airbase. 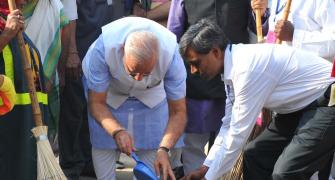 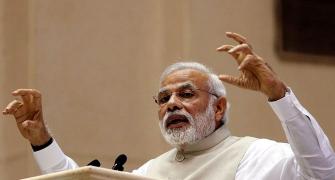 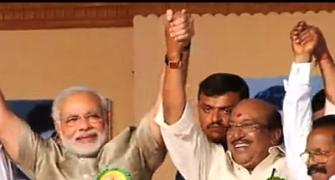 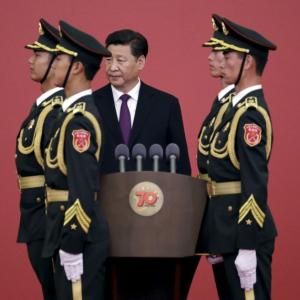