News
Business
Movies
Sports
Cricket
Get Ahead
Money Tips
Shopping
Sign in  |  Create a Rediffmail account
Rediff.com  » News » 'With Pakistan, where is the question of trust?'

'I have no problems with prime ministers interacting with each other, that is not a bad thing. My problem is that if we think engaging with the Pakistanis is going to solve our security problems, then I am afraid that is not going to happen.'

'If you continue engaging with them, we can actually end up encouraging the Pakistanis giving them a sense of impunity, who will then think that they can continue with their acts (of terror) even as you talk to them.'

Sushant Sareen, Consultant, Pakistan Project, at the Institute for Defence Studies and Analyses, tells Prasanna D Zore/Rediff.com how terror attacks like the one at the Pathankot air base puts Indian governments in a fix when it comes to engaging Pakistan in peace talks. 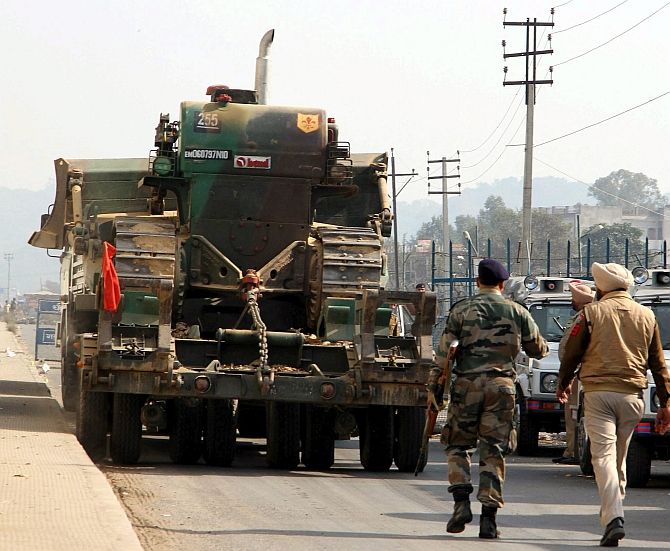 Were you expecting a terror attack after Prime Minister Modi's visit Lahore?

I suppose this fits into a pattern. This has been happening since (then prime minister Atal Bihari) Vajpayee went to Lahore in 1999.

Whenever you start the talks process or some atmospherics that comes ahead of a peace process, if you can call it that, there is always some kind of spectacular attack.

A couple of days before Nawaz Sharif landed here (for Modi's swearing-in) you had an attack on the Indian consulate in Herat (Afghanistan) which we seem to have forgotten.

Also, we had some studies that state that in the years between 2004 and 2008 when we did seem to have good relations with Pakistan we had 18 major terror attacks in India which had links with Pakistan.

Then post 2008 when we stopped talking to them, the number of attacks fell drastically.

I see a pattern here; I don't know how somebody else sees these attacks.

Is the Pakistani army playing mischief? Are political leaders in Pakistan, who don't want good relations with India, in cahoots with the army?

I will not distinguish between the two. I will call them the Pakistani State. We give them an alibi by saying, 'Oh, the Pakistani guys (political leaders) are the nice guys, but the army is evil.'

I don't think it behoves of us to give them an alibi. To my mind, I see them acting as good cops and bad cops.

Are you saying there are no Pakistani leaders who want to invest in a good relationship with India?

Number one, I am putting them both in the same category. I don't distinguish between the two.

When I say 'good cop, bad cop', I mean there are some guys who say all the good things and there are other guys who want to play hardball.

In that sense, there is a kind of perfect synergy between them.

Based on your understanding and insights into the India-Pakistan relationship, do you think any Indian government should trust the Pakistani leadership and carry forward the peace process just like Prime Minister Modi did in Lahore about a week ago?

In international relations, you don't trust anybody. Bottomline.

I wouldn't trust even my mother in international relations because what happens is when interests change, when situations change and then alliances and friendships change.

With a country like Pakistan, where is the question of trust? I would have to take a leap of faith to have trust on Pakistan. To be very honest. I would not trust Pakistan.

Just before Prime Minister Modi arrived in Lahore, he was in Afghanistan. Is there a message from the Pakistan army, which considers Afghanistan as its 'deep asset' to India to keep away from Afghanistan?

There are number of messages here, but I don't see how one country can tell another country to not have any relationship with a third country. It is like India telling Pakistan that if you have good relationship with Sri Lanka, we will bomb you.

The message to India is (with attacks like Pathankot) basically what the Pakistani army is trying to test is how serious are you when it concerns the peace process with that country.

This is a kind of Catch-22 situation. If you try to break off the peace process because of such an attack, everybody will accuse you of being churlish to react to what the non-State actors are doing.

While I don't buy into these fictions of non-State actors, there is this problem and you can't break off (from talks).

But if you continue engaging with them, we can actually end up encouraging the Pakistanis giving them a sense of impunity, who will then think that they can continue with their acts (of terror) even as you talk to them.

This does catch the Government of India in bit of a bind.

In what way will Prime Minister Modi react to such an audacious attack?

I have no way of knowing how he will react because he never ceases to surprise. I don't know what he is going to do.

One could say they were caught napping, in the sense that, how could so many terrorists enter the airbase?

I think to the credit of our security forces, the way they reacted... perhaps they were lucky. At least, they reacted fairly fast and managed to take out four or five terrorists...

What should be India's response to Pakistan after the Pathankot terror attack?

How do you react to such terror attacks?

My take is that don't tread the beaten path. We have done that since the last 70 years. If it hadn't worked out in this time, I don't see how it will work going ahead.

The old plot needs to change.

Now that includes a whole lot of other things that need to be done. But I don't know if that fits into the political or strategic calculations which governments have. Unless that parading changes, I don't know how you are going to get over this.

What exactly are you suggesting?

I am saying that you can't tread the beaten path any longer. It is not working. So you really need to rethink, going back to the drawing board... but I don't think anybody is interested in doing that.

Was Prime Minister Modi's visit to Lahore to meet Nawaz Sharif along the beaten track?

I have no problems with prime ministers interacting with each other, that is not a bad thing.

My problem is that if we think engaging with the Pakistanis is going to solve our security problems, then I am afraid that is not going to happen.

Is Pakistan trying to open another frontier in Punjab once again given the Gurdaspur and Pathankot terror attacks?

I think that is very clear. Not just Punjab... they will open a frontier wherever they can.

They have been trying to revive militancy in Punjab for a number of years and they have started getting some traction over a couple of years now.

This game is not played only by using terrorist attacks.

They have been trying to revive militancy in Punjab for almost 8, 10 years now. There are telltale signs of them (the Pakistani establishment) making inroads (in Punjab).

But I think we would be stupid to blame it all only on the Pakistanis. Our known acts of commission and omission are also responsible for that.

What are these acts?

Basically, the way politics in Punjab is being handled. The kind of governance or the lack of it of the (Chief Minister Parkash Singh) Badal regime; the fact that they have bloody reduced it to a narco state also adds to the problems in the state.

Is this narco money being used to fund terrorists?

A whole generation of young people are being made into junkies and nobody seems to be bothered about this.