News
Business
Movies
Sports
Cricket
Get Ahead
Money Tips
Shopping
Sign in  |  Create a Rediffmail account
Rediff.com  » News » Do you know all this about Modi's ministers?

The PM's choice of ministers is interesting, to say the least, says Jyoti Punwani. 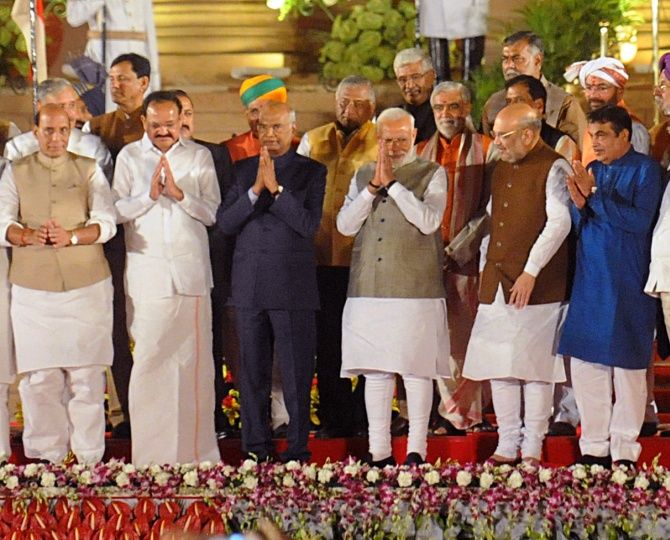 The man who declared that astrology is superior to science is the HRD minister.

Here's Ramesh Pokhriyal's full quote: 'Science is a dwarf in front of astrology. Astrology is the biggest science. It is in fact above science. We should promote it. We speak about nuclear science today. But Sage Kanad conducted nuclear test one lakh years ago. We had the knowledge of transplants.' (December 2014)

Then there are those facing criminal cases: Sanjeev Balyan, minister of state, animal husbandry, is an accused in the 2013 Muzaffarnagar riots. Pratap Sarangi, minister of state for MSM industries, has seven cases against him, including 4 for criminal intimidation, two for promoting communal enmity and one for obscenity.

Sarangi was head of the Bajrang Dal when Dara Singh, a Dal member, burnt missionary Graham Staines and his two little sons alive in 1999.

Apart from Giriraj Singh, now minister for animal husbandry, and Sadhvi Niranjan Jyoti, minister of state for rural development, both known for their communal remarks (Jyoti had called the Delhi 2015 election as a battle between 'Ramzade and haramzade', Singh has more than once asked Modi opponents to go to Pakistan), Minister for Parliamentary Affairs Prahlad Joshi said this about Kashmiris after the Pulwama incident: 'There are apprehensions that there is a terrorist in every house in Kashmir.' Arvind Sawant, minister for heavy industries, was among the 11 Sena MPs protesting against the bad quality of food being served in Maharashtra Sadan in July 2014.

The protest climaxed in one of them, Rajan Vichare force feeding a Muslim staffer who was observing roza.

'This is not the last election. I have details of all officials. The government would change after five years. I would hang all of them upside down then,' Shekhawat reportedly said when government officials videographed his election vehicles during his campaign in April.

He is now the Jal Shakti minister. Ashwini Kumar Choubey has an FIR filed against him for threatening a sub divisional magistrate who who stopped his convoy in Buxar during the election campaign in April.

The number of vehicles in his convoy violated the model code of conduct, 'Khabardar,' Choubey warned SDM K K Upadhyay.

He is now minister of state, health and family welfare.

The BJP's Maharashtra President RaoSaheb Danve, now minister of state for consumer affairs, has an FIR against him for his unforgettable advice to Maharashtra's voters during the 2016 municipal elections in Paithan, Aurangabad district:

'Today is December 17 and tomorrow is December 18, the voting day. I know all of you are impatient to go home.'

'The eve of the election is important, as suddenly you get darshan of Laxmi. If such Laxmi comes to your door, please welcome it.'

'But, whatever you have decided, stick to your voting decision.'

And who can forget Vijay Kumar Singh coined the word 'presstitute'. He is now minister of state in the road transport ministry. 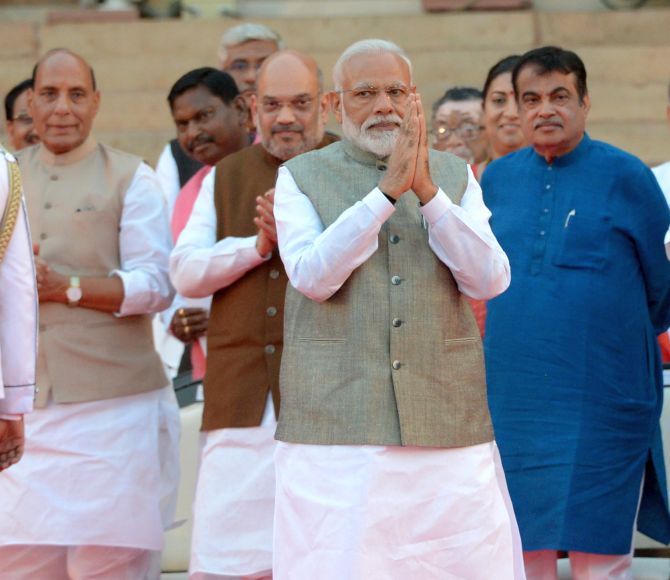