'The most unfortunate part is that after precipitating the crisis situation on Tuesday, the government ducked and took help from Saudi Arabia and the UAE to 'de-escalate' the situation.'
'Make no mistake, this fateful move has grave implications.'
'You don't take help from the wolf to guard the sheep, right?' says Ambassador M K Bhadrakumar. There has been an avalanche of reports in the international media quoting Western diplomats and security officials to the effect that India's 'intelligence-led... non-military preemptive strike' on a big terrorist camp in Pakistan on February 26 was all baloney. Apparently, these reports say, there was so such terrorist camp in existence in Balakot.

Incredibly enough, no one on the government cares to set the record straight. The foreign secretary had claimed earlier that the strike killed 'a very large number of Jaish-e-Mohammad terrorists, trainers, senior commanders, and groups of jihadis who were being trained for fidayeen action were eliminated.'

But surprisingly, the day after the FS spoke, Air Vice Marshal R G K Kapoor said it was 'premature' to provide details about casualties. He would only say that the Indian armed forces had 'fairly credible evidence' of the damage inflicted on the camp by the air strikes.

It is important for the government to clarify, because what happened was a defining moment in India-Pakistan relations and in India's fight against terrorism.

The nation has a right to know. No doubt, crossing another country's borders and attacking its territory is a major escalation. What is the rationale behind such escalation?

Prime Minister Modi says he has given a 'free hand' to the armed forces. Are we to assume that the IAF suo moto acted on February 26? That is inconceivable.

This calls for deep introspection: What is it that the government achieved through the 60-odd hours between the early hours of Tuesday and the evening of Thursday? There is no shred of evidence that the Pakistani side is cowed down in fear.

On the contrary, Pakistan insists that it will retaliate against any act of Indian aggression. Prime Minister Imran Khan disclosed in the national assembly in Islamabad on Thursday that on the night of Wednesday-Thursday, the Pakistani military was in a state of readiness to fire missiles into India.

Some of our self-styled experts say we have 'sent a message' to Pakistan that we will hit them hard if terrorism continued. How can they be so sure?

The Pakistani retaliation with an attack on India the very next day -- an act of war by targeting our military installations -- discredits their thesis.

The most unfortunate part is that after precipitating the crisis situation on Tuesday, the government ducked and took help from Saudi Arabia and the UAE to 'de-escalate' the situation.

Make no mistake, this fateful move has grave implications.

The whole world knows that these two petrodollar States are the principal sponsors of terrorist groups who destroyed Syria.

Importantly, how can we possibly overlook that Jaish-e-Mohammed and other terrorist organisations in Pakistan have received direct support from these Arab countries, especially Saudi Arabia? There is plentiful evidence of it.

An action request cable archived by Wikileaks, documenting the illicit finance activities in Afghanistan and Pakistan, stated that 'it has been an ongoing challenge to persuade Saudi officials to treat terrorist financing emanating from Saudi Arabia as a strategic priority.'

The cable continues, 'Still, donors in Saudi Arabia constitute the most significant source of funding to Sunni terrorist groups worldwide.'

It describes Saudi Arabia as 'a critical financial support base' for al-Qaeda, the Taliban, Lashkar-e-Tayiba and other terrorist groups.'

By the estimation of the US state department, LeT and JeM are all but synonymous!

As far back as in 1993, the LeT became part of the United Jihad Council, an umbrella group for militant Islamists operating in J&K, and in doing so, it formed a direct alliance with the JeM (which claimed credit for the Pulwama attack recently).

In fact, another Wikileaks cable confirmed that Saudi Arabia and the UAE have been funnelling money not just to LeT but to JeM directly. It says:

'Locals believed that charitable activities being carried out by Deobandi and Ahl-e-Hadith organisations, including Jamaat-ud-Dawa, the Al-Khidmat Foundation, and Jaish-e-Mohammed were further strengthening reliance on extremist groups and minimizing the importance of traditionally moderate Sufi religious leaders in these communities.'

'Government and non-governmental sources claimed that financial support estimated at nearly 100 million USD annually was making its way to Deobandi and Ahl-e-Hadith clerics in the region from 'missionary' and 'Islamic charitable' organizations in Saudi Arabia and the United Arab Emirates ostensibly with the direct support of those governments.'

Saudi Arabia has quite openly held out assurances to Pakistan that it need not go after JeM directly.

Indeed, the most dangerous part of the gambit by the Modi government to let in Saudi Arabia and the UAE into its matrix over Pakistan and Kashmir is that this policy shift is completely of sync with the wider geopolitical struggle unfolding in the region.

Quite obviously, Saudi Arabia wants to win Pakistan over in a tug-of-war game with Iran and is doling out to Islamabad generous financial help and a $10 billion investment plan to to build an oil refinery in the Gwadar port project (which actually puts a major Saudi project on Iran's border.)

Against this backdrop, how could Indian policymakers blithely overlook the far-reaching, dangerous implications of consorting with Saudi Arabia and the UAE as partners in its fight against terrorism in J&K fomented by Pakistan?

The most intriguing part is the newfound bonhomie between the Indian elite and the sheikhs. Put differently, you don't take help from the wolf to guard the sheep, right?

What explains the Faustian deal to allow them to enter the sanctum sanctorum of India's foreign policy -- Kashmir and the matrix of India-Pakistan relations?

Beware of the lure of green money. The Saudis and Emiratis are great operators in Washington, DC. Their fierce lobbying and charm offensives are legion. If they could manipulate the American political class so brilliantly, our oligarchy must be chicken feed. 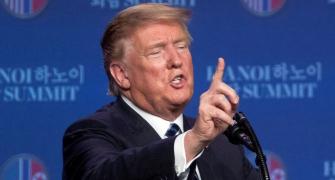