Why was Kumbh Mela held amidst raging pandemic?

What is particularly worrying is that the vast majority will not have access to testing or even to proper treatment.
These cases could have been avoided if the government had shown the political will to do so, observes Rashme Sehgal. 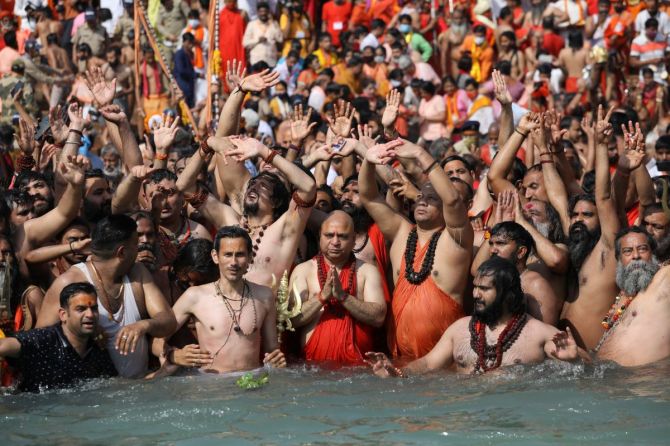 IMAGE: The Shahi Snan at the Kumbh Mela in Haridwar. Photograph: Anushree Fadnavis/Reuters

On April 27, the last of the Shahi Snans will be held as part of the Kumbh Mela at Haridwar.

It is being held to celebrate the full moon night of Chaitra which is the first month in the Hindu calendar.

The local administration is bracing up for over one million people who are expected to take a dip in the Ganga.

The figure could be higher because already over 2.8 million people took a dip on each of the three Shahi Snans that took place earlier in April.

Pilgrims were then seen maintaining no social distancing as thousands stood cheek-to-jowl at the edge of the ghats to take their salutary dip in the river.

For several months now, several health experts have been demanding that in lieu of the pandemic, the state delay the holding of the Mahakumbh which is held in cycles of twelve years and was slated to be held in 2022.

It was advanced by one year due to astrological configurations and April 2021 was deemed to be more auspicious.

That may well be, but with a pandemic raging through the country, the Uttarakhand government should have shown enough courage to cancel the event in its entirety.

But since this was not done, nothing is preventing them from holding a token event of allowing five Bairagi sadhus to take the fourth Shahi Snan of April 27 since the final snan has been reserved for them.

He went to Haridwar in the midst of the Kumbh Mela and declared triumphantly that 'Ma Ganga's blessings are there in the flow of the river. So there should be no coronavirus.'

Rawat also stated no devotee would be 'unnecessarily harassed in the name of COVID-19 restrictions.'

A few days later he tested positive for the virus, which has so far killed almost 200,000 Indians and infected over 16 million, the second in the world after the United States.

The virus proved Rawat wrong. Over 2,500 pilgrims have fallen prey to the virus with Mahamandaleshwar Kapil Dev Das, 65, head of an akhada who died from this disease last week.

Narendra Giri, president of the 14 leading akhadas also developed coronavirus as did several politicians who visited Haridwar including Akhilesh Yadav, the former UP chief minister. 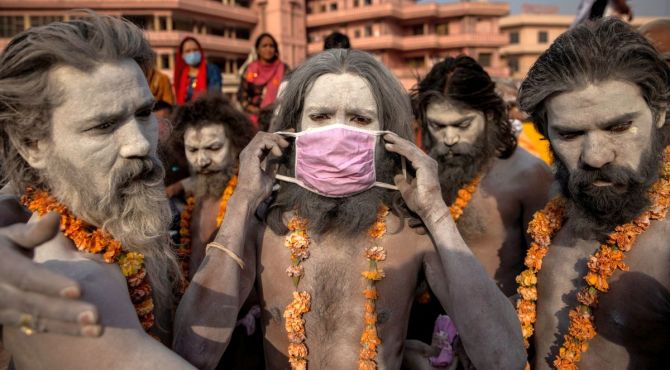 IMAGE: A sadhu wears a mask before the dip in the Ganga during the Shahi Snan in Haridwar. Photograph: Danish Siddiqui/Reuters

The problem is that the earlier Uttarakhand chief minister Trivendra Singh Rawat was so much in awe of Uttar Pradesh Chief Minister Ajay Mohan Bisht (also known as Yogi Adityanath) that a large number of his decisions were known to have been inspired by what was going on in his neighbouring state.

The success of the 2019 Ardh Kumbh attended by a huge populace saw Trivendra Singh Rawat informing his bureaucrats that the Haridwar Mahakumbh must outdo the 2019 event in pomp and splendour.

Some of his bureaucrats were known to warned against the holding of large religious gatherings and expressed misgivings that given the rise of COVID-19 cases, the state should adopt a more cautious approach.

But no such warning was voiced by the Union ministry of health.

Rather, very strangely on April 6, the Union health ministry put out a tweet denying that the Kumbh Mela could become a serious public health emergency.

Large financial allocations of over Rs 2,000 crore (Rs 20 billion) were made for the Kumbh Mela and over Rs 13 crore (Rs 130 million) were reportedly allocated to the 13 akhadas to help beef up arrangements for pilgrims visiting Haridwar during the Kumbh Mela.

Talks of curtailment of the size of the Kumbh was also met with criticism by the 800 hoteliers and 350 ashrams in Haridwar who depend on religious tourism to survive.

But soon after submitting his resignation in end March, Trivendra Singh Rawat began singing another tune going public to state that given 'the rising number of COVID-19 cases in India, we need to be more cautious in organising mega religious fairs like the Mahakumbh'.

The effects are there for all to see. Three weeks into the Kumbh Mela, the state is already reeling from the effects of this super spreader. 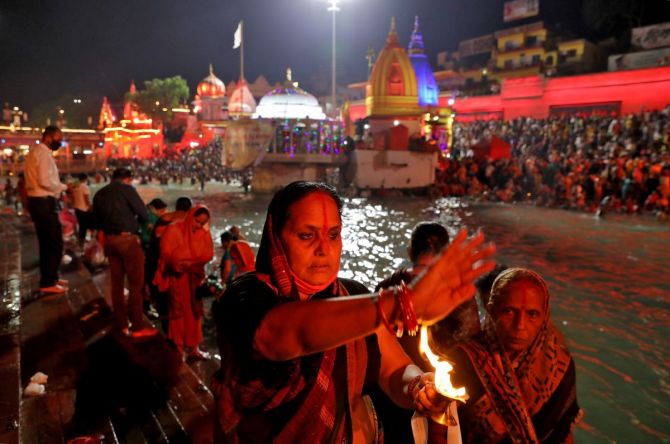 IMAGE: A devotee offers prayers on the banks of the Ganga. Photograph: Anushree Fadnavis/Reuters

Uttarakhand has witnessed an alarming rise in cases during these three weeks.

Its death rate has shot up and is presently higher than the national average death rate.

Anoop Nautiyal, a social activist who is monitoring the pandemic on a daily basis, points out, "More deaths means patients are not getting timely treatment."

"There is not enough testing going on in the state and there are few medical facilities available at the district level," says Nautiyal.

On April 13, the state registered the largest spike in one day recording almost 1,925 cases.

Of course, the Maha Kumbh cannot alone be held responsible for this coronavirus tsunami.

Several other super spreader events including relentless electioneering and holding of gargantuan rallies in West Bengal have seen numbers escalate in the entire eastern belt.

Prime Minister Narendra Damodardas Modi, as is his style, came up with a luke warm appeal to the sants that the mela should now be only 'symbolic'. But this is neither here nor there.

Prior to his appeal, there has been an avalanche of statements from our political class claiming the virus was behind us.

On March 7, Union Health Minister Dr Harsh Vardhan issued a declaration of victory that 'We are at the endgame of the epidemic'.

Dr Vardhan's remark was followed by a statement by Assam Health Minister Himanata Biswa Sarma who said the 'pandemic is over, we don't need masks'.

This at a time when Assam has seen a 230 per cent surge. Cases in West Bengal have doubled and the state reported 90,000 cases between March 15 and April 19.

Despite India then having over 1.7 million active corona cases, Modi congratulated the huge crowds that had gathered at an election rally in Asansol in West Bengal on April 17 declaring, 'I am elated to see such huge crowds. Everywhere I look, I see people and more people.'

Obviously, safety norms had been thrown to the winds. The public at large comprise a faceless vote bank whose only job is to cast their vote for the Bharatiya Janata Party.

The same thought process was at work at the Maha Kumbh.

The akhada seers comprise an important tool for social mobilisation for the Rashtriya Swayamsevak Sangh-BJP. They cannot be seen to antagonise them in any way.

The death of Kapil Dev Das saw Modi speak to Swami Avdheshanand Giri, chief of the Hindu Dharma Acharya Sabha, requesting him to tone down the mela.

The Vishwa Hindu Parishad was also roped in to have parallel conversation with the seers to trim down congregations given that 1.2 million devotees were attending the Kumbh every day.

Devotees continue to flock the mela. Several have done prior bookings in the special Kumbh Mela trains being run for pilgrims by the Indian Railways.

In addition, 15 pairs of trains have been used to augment additional accommodation for the pilgrims.

But by and large, the majority of people travelling in trains are not being tested according to sources in the Indian Railways. IMAGE: A health worker collects a swab sample from a devotee on the banks of the Ganga during the Kumbh Mela. Photograph: Anushree Fadnavis/Reuters

The reverberations of this mela are being felt not only in Uttarakhand, but across the county.

Some state governments have begun to bow to public pressure.

The Kerala government agreed to disallow the public to attend the popular annual Thrissur Pooram festival. Over two million devotees would attend this event every year.

The state government is planning to screen it online with only the organisers having been given permission to attend the ceremonies.

Since the start of the Kumbh, 2,500 people have been tested positive in Haridwar.

The number may not appear to be too large ,but the hordes who have got the virus and not been tested have gone on to infect those they had contact with.

This is bound to add to the already surging COVID-19 caseload.

What is particularly worrying is that the vast majority will not have access to testing or even to proper treatment.

These cases could have been avoided if the government had shown the political will to do so.