The US actions can be seen as a riposte to India's neutral position on the Ukraine crisis, its continuing import of Russian arms and oil thus undermining Western sanctions, argues Colonel Anil A Athale (retd). In the midst of all the hullabaloo over the 75 years of Independence and domestic political activities, a very important change in our strategic environment has gone un-noticed.

In the first week of September 2022, India and China agreed to disengage from the Hot Springs area in Ladakh.

Though purely tactical in nature, in the sense that neither side has withdrawn troops from the area and have merely gone back a few kilometres, it is significant in the 'intent' of both sides to avoid confrontations like the one at Galwan on June 15-16, 2020.

Almost simultaneously, as India and China were trying to reduce tensions on the border, the US announced a package worth nearly $500 million to Pakistan to upgrade its F-16 fleet.

It takes one back to the hilarious American justification in the 1980s when it supplied sea-based ship to ship Harpoon missiles to Pakistan under the excuse of fighting the Soviets in land locked Afghanistan!

One should not be surprised that in a review due soon of the 'grey list' for terror financing, Pakistan will be given relief, thus facilitating its access to Western finance, so desperately needed by debt-ridden Pakistan.

These twin developments show that India is distancing itself from stridently anti-China moves of the US-led West, especially in the wake of recent tensions over Taiwan.

Also, the US is going back to its time tested stratagem to balance India by giving sophisticated weapons to Pakistan.

This had some degree of urgency ever since India acquired Russian-made Triumph S-400 missile system. This effectively made India dominate Pakistani air space without crossing the border.

In the changed circumstances, retaliatory air strikes like the one launched against terror camps in Balakot in February 2019 would be a cake walk for the Indian Air Force as Pakistani F-16s would not be able to interfere in the Indian attack.

With this new package, the US wants to restore that balance and neutralise the Indian ability to retaliate.

This will encourage Pakistan to go back to the tactic of carrying on a proxy war against India without the fear of reaction.

The US package in effect encourages terrorism in South Asia.

The US actions can be seen as a riposte to India's neutral position on the Ukraine crisis, its continuing import of Russian arms and oil, thus undermining Western sanctions.

But the consequences of these American moves are that India will be forced to divert attention from its build up against China and instead deal with Pakistan.

A two front threat is something that India could do without.

The American moves are likely to dampen the enthusiasm of the pro-US lobby in India that wanted India to go the whole hog with the US strategy of military containment of China.

The American moves against India -- that is what they are -- also puts a question mark over the sincerity of American intent towards China.

Sceptics see the Sino-American moves as a return of the Cold War era when the US and China were on the same page as regards support to Pakistan.

But that would be too simplistic an explanation for the current happenings.

It could well be that after the regime change in Pakistan (the ouster of the pro-China Imran Khan), the Americans see an opportunity to wean away Pakistan from the Chinese grip.

The economic/debt crisis in Sri Lanka has indeed prompted a re-think in Pakistan about the Chinese debt trap and a whole gamut of issues related to the China Pakistan Economic Corridor.

As in the past, post the 2001 War on Terror, the Americans have been consistently arguing in favour of aid to Pakistan as a means to maintain leverage in that country.

For the last two decades that has been the principal American argument against cutting off military and economic aid to Pakistan.

The unsaid flip side of that policy always has been to use aid to Pakistan as a pressure point on India to follow pro-American policies vis a vis Russia and China. It is true that the US needs India more than ever as a geographically proximate power to China.

However since the US confrontation with China is more in the maritime and space domain, Indian ability to put 'boots on ground' is not of much relevance to the US.

Chinese strategic targets on land are too far from the India-China border to be of any importance in this confrontation.

India is yet to develop its maritime and air power sufficiently to pose a threat to China.

The US therefore has been very careful in forging ties with India though its Pacific command.

The Indian options are constrained by inflamed public opinion and its immature democracy that sees even a reasonable compromise on the un-demarcated border as 'betrayal' or 'surrender'.

The Indian public has never been educated that what we claim as 'our' territory in Ladakh was neither a traditional border nor a border that was ever under Indian administrative control.

It is true that it was not under Chinese/Tibetan control either.

Most of the disputed Ladakh area was in reality a no-man's land that China occupied in 1959.

Once having occupied area necessary for a road link between Xinjiang and Tibet, China has no territorial ambitions in Ladakh. It has kept the dispute alive to serve as an economic drain and strategic threat to India in co-operation with Pakistan.

China's objectives in Ladakh are purely economic/political and not territorial.

By investing the area with the aura of national sovereignty et al, we have played into Chinese hands.

India faces a real dilemma in terms of harmonising its long-term interest with short term tactics.

In the long-term view, India has to live with China as a neighbour as American power recedes from Asia.

A detente with China is our future interest.

But in the short term as China collaborates with Pakistan to weaken India we have little choice but to seek Western help to moderate Chinese behaviour.

Colonel Anil A Athale (retd) is a military historian whose earlier columns can be read here. 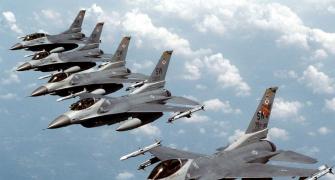 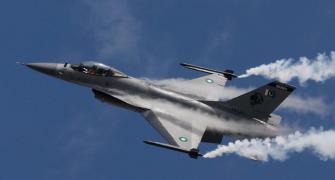 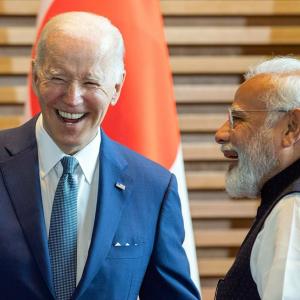 US there for India, we are ready and able: Biden admn