'The US will not want to tangle with China landwards.'
'Nor will the US confront the Chinese navy seawards on India's account.' Dr Bharat Karnad, the national security expert at the Centre for Policy Research, the New Delhi-based think-tank, believes the time has come for the Narendra Damodardas Modi government to draw up a strategic non-aligned policy to suit India's interests.

"India, its government, and Indians, generally, will have to get out of the debilitating habit of mind of expecting some big power to come to its aid and fight its wars," Dr Karnad tells Rediff.com Senior Contributor Rashme Sehgal in the first of a two-part interview:

Home Minister Amit Shah said at a book launch in New Delhi on May 11 that Prime Minister Modi has transformed India's foreign policy and made it subordinate to India's defence and security interests.

This is true, especially in light of the Ukraine developments when the Modi government successfully resisted the relentless pressure the US and West European States, in particular, put on New Delhi to sever India's arms and energy supply lines to Russia.

In the ongoing Russia-Ukraine war, has India's tight rope walking between looking after its interests vis a vis Russia without displeasing the US been a success? In the event of a Chinese attack in the future, will the US come to our rescue?
What about Home Minister Shah's statement made on May 5 where he spoke about India reclaiming Pakistan occupied Kashmir?

India, its government, and Indians, generally, will have to get out of the debilitating habit of mind of expecting some big power to come to its aid and fight its wars.

That has never happened in the past and will not in the future -- no matter what is at stake.

The US will not, in particular, want to tangle with China landwards -- a policy inhibition nursed from the Korean War (1950-1953) when the US-led Allied forces suffered grievous losses and were pushed back down to the 39th Parallel where the lines stabilised on the present North Korea-South Korea border.

Nor will the US confront the Chinese navy seawards on India's account.

Washington may, however, channel real time intelligence, etc and do things that do not in any way involve American 'boots on the ground'.

The aggressive 'recovery of Pakistan occupied Kashmir' issue raised by the Modi regime seems to be more a provincial and national political ploy to keep Pakistan and the domestic Opposition on the defensive, primarily because militarily it is a difficult goal to achieve what with Chinese strategic interests being directly engaged with the Belt and Road Initiative-related 'China-Pakistan economic corridor'.

There is an equally strong possibility that with Russia's increasing dependence on the Chinese, the Russians will also not come to our help in case of a Chinese attack.

Russia will not come to India's direct assistance either.

It, in any case, will have enough on its hands for the next few decades by way of reconstructing its own economy (sans revenues worth some 300 million euros a day from export of oil and gas to Germany and other European States) and that of the Donbas region of eastern Ukraine it will annex.

As far as the Russia-China nexus goes, Moscow is no strategic fool.

It is mindful of not being a cog in China's hegemonic designs and as wary of potential territorial inroads by China in mineral rich eastern Siberia as India is about a Chinese imperium in Asia and the PLA occupying Indian land in Ladakh and elsewhere. 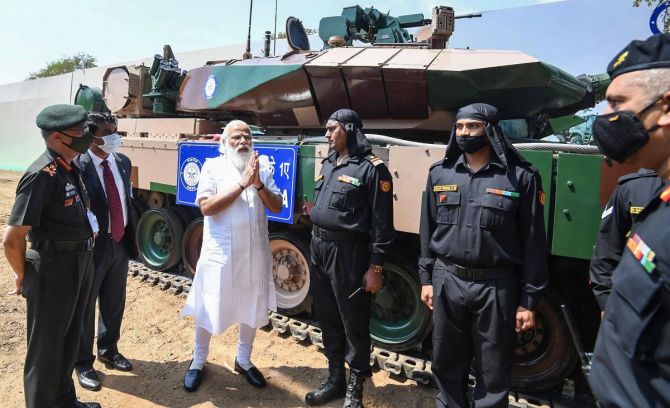 A perception that has gained ground as a consequence of the Russia-Ukraine war is that Russian weaponry has not proved to be all that good and therefore demand for it will be reduced in the future.
Do you see that happening in the case of India which remains heavily dependent on Russia for arms supplies?

All weapons systems end up performing less than as advertised in brochures and by arms salesmen.

That said, yes, the Ukrainian partisans have revealed a major design flaw, for instance, in the T-72 main battle tank -- the wrong placement of the ammo storage compartment under the crew cupola, which tends to blow up with the first guided anti-tank munition hit midship.

It is a matter of grave concern to the Indian armoured forces featuring the T-72.

Maybe, this will finally convince the armoured brass in the directorate in army headquarters to take ownership of the indigenous Arjun MBT (which handily beat the Russian T-90 and T-72 tanks in test trials in all weather, all conditions, all terrains!), and to buy this Indian combat vehicle in bulk and invest fully in its further improvement.

On the other hand, the Su-30MKI air superiority fighter and the MiG-29 for air defence have no peers.

But even these renowned planes pale in many performance aspects to the home-grown Tejas 1A! If the Ukraine crisis proves anything it is for the Indian military to 'Buy Indian' so that Prime Minister Modi's laudable atmanirbharta mantra does not remain mere rhetoric.

I ask this question in the context that in a recent article, you have very caustically mentioned how the 2008 India-US civilian nuclear cooperation agreement which was supposed to deliver '20,000 MW by 2020' and the 2012 Defence Technology and Trade Initiative to transfer advanced military technologies and high-value tech collaboration have hardly delivered.
The only important joint project to-date involving US assistance for developing a combat aircraft jet engine in India was called off by President Trump.
Why does the US have reservations in providing advanced equipment and technology transfer to India given that we are a member of QUAD?

The fact is the US does not like to share its top-end technology with anyone, including its closest allies, because it perceives it as the US military's edge in battle.

For example, the United Kingdom -- America's closest, most intimate, ally invested several billion dollars in the development of the multi-role Lockheed F-35 combat aircraft and expected a wholesale transfer of its technology.

But once the F-35 got into production stage, Washington refused to pass on source codes for the software driving the onboard avionics.

So, what chance, do you think, India has in securing really high military technology? 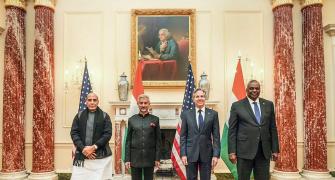