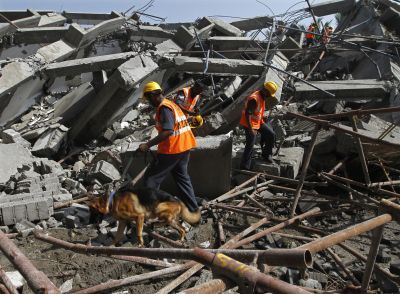 The collapse of an under-construction 11-storey building in Chennai which claimed 42 lives should serve as a wake-up call for the housing sector to have a regulatory mechanism for the construction industry, says N Sathiya Moorthy

The collapse of an under-construction, 11-storey building in the Moulivakkam suburb of Chennai over the weekend has thrown up questions for which no ready-answers would be (made) available.

For starters, it has shown that man-made disasters of the kind could at times create greater problems to rescue efforts than natural catastrophe such as the tsunami of 2004.

Five days after the building collapse, committed members of the rescue teams are still at work on the site, clearing the mount of debris, and hoping against hope that the feeble voices that are heard from beneath do not die away in vain.

Two, the incident has exposed the unscientific methods of construction undertaken all across the southern metropolis -- and at times across Tamil Nadu (as may be in many other parts of the country).

Cutting across party-lines, politicians are in cohorts with unscrupulous builders and officials, at times heading the troika, for big-time illegal financial gains. Builders throw laws, rules and regulations -- and judicial verdicts from the Supreme Court downwards -- to the wind, from land-purchase, to construction standards.

Builders take a cynical view of the rule on ‘floor-space index’, or FSI, the governmental formula under which the height of a building, the upper-limit for built-in area are all fixed. Post facto regularisation is another area where the politico-bureaucratic nexus makes a kill across the board, according to industry insiders.

Pending detailed enquiry -- which hopefully will be in the offing -- the errant father-son duo of builders has claimed that the lightening accompanying an unexpected thunderstorm that fateful Saturday evening was the cause for the collapse.

Local media reports have claimed rules’ violations in the granting of construction-sanction. Quick to respond after a quicker verification of records, the state government has filed a case against popular Tamil daily, Dinamalar, possibly not wanting to stop with clarifying the official position through a media release.

There is no knowing the fate of the 72 persons who have paid for flats in the ill-fated building. Nor is there any knowing of the fate of the investors in the adjacent 11-storey complex, also of the same builder duo, who have since been arrested.

The builders may be charged with criminal negligence under Section 304-A of the Indian Penal Code (rash and negligent act leading to death), punishable with a two-year prison term, fine, or both. Courts in India have not generally fined convicts in such cases heavily, to make out a lesson for offenders-in-waiting.

As for the investors, lawyers are veering round to the view that they can expect relief only from consumer tribunals.  Whether ‘crashed’ builder will have the kind of money to reimburse the investors – with or without interest -- is another question.

Even if he had the money, will the government and the courts have the will to fast-track the processes and ensure that the builders coughed up the dues, remains to be seen. Worse is the case of investors who have already taken bank loans, and will have to pay the monthly EMI, too.

The question will thus arise that if the bankers’ association should have a system to verify construction details before clearing housing loans -- and even have on-the-spot inspection from time to time, so that member-banks do not end up making dead funding to investors who may have no other capacity to repay the loans.

Then there are owners of other adjacent buildings that have been reduced to rubble under the weight of the collapsed building. Not many casualties have been reported from those houses, which were mostly occupied.

Over the past decade or so, land and building prices have shot up in Chennai than even in Bangalore, the nation’s IT capital, where they were sky-rocketing in the previous decade or so.

Stringent FSI norms, linking building-height to road-width and the availability of civic amenities is the main reason for the high cost of land and building in the city and suburbs, and also other parts of the State.

However, ‘regularisation’ in other areas of building construction has remained a boon to errant builders, and their politico-bureaucratic nexus.

The social sector progress achieved by the state over the years after Independence is now reflected in the high cost of land and housing.

Better education and employability in relative terms has meant that demand for better housing is always on the rise, with almost every middle-class family having an earning member overseas, sending back home money in dollar-terms.

A duty to give back to their ageing parents a comfort level that they could not afford earlier, and a desire to give better education to their own children, coupled with dream-incomes for employed couples in the IT era has changed the landscape in the state with the highest levels of urbanisation (up to 50 per cent) in the country.

The economic crisis of the past years has slowed down the construction industry. Yet, there are investors who see in it an opportunity to buy their dream homes when the prices are relatively stagnant, if not outright on the reverse gear.

It’s ironical that in a pan-Tamil State where ‘anti-Hindi’ agitation helped change the course of electoral politics in the sixties, Hindi now seems to be the lingua franca in street-corner shops, home security, outsourced men and women working for relatively low-wages and minimal job-protection.

The upward mobility of the Tamil Nadu youth has meant that there are no hands for jobs in the unorganised sector of the low-end service industry. Legal clearance for ‘out-sourcing’ has also meant that agencies offer only low salaries in the era of economic liberalisation, pocking much of the contracted fee, themselves.

That way, the building-collapse has also brought to light the plight of migrant, unorganised sector labour from other States, who have since become the backbone of not only the construction industry but also every other section of the low-levels of the ‘services sector’ in Tamil Nadu.

It is no different in other South Indian States, but in Tamil Nadu in particular, construction labour, farm hands and even hotel boys and neighbourhood provision store assistants all come from the rest of the country -- mostly Odhisa, Bihar and neighbouring Andhra Pradesh.

So numerous has been the deployment of migrant labour in Tamil Nadu’s construction sites in particular that Andhra Pradesh Chief Minister N Chandrababu Naidu thought it fit to visit the Moulivakkam disaster site and enquire about the well-being of those hospitalised.

Among the Moulivakkam victims, most construction labour, were those from Odhisa. Their bodies have since been sent home while the nativity of many of those still trapped inside may not be known immediately.

As with local counterparts from the past, construction labour are a slotted lot, kept away from the prying eyes of rights groups and trade unions. The latter too do not find any constituency worth fighting for.

Under the circumstances, it’s not unlikely that the Moulivakkam tragedy, like other lesser variants from the past, is bound to die a natural death once all the debris has been cleared -- an object for journalists’ google-search at recurrence of another tragedy of the kind. 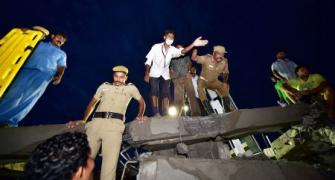 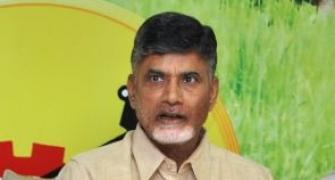 Two killed, 9 hurt as under construction building collapses in Chennai 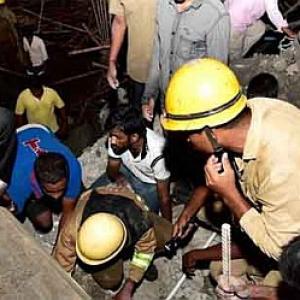 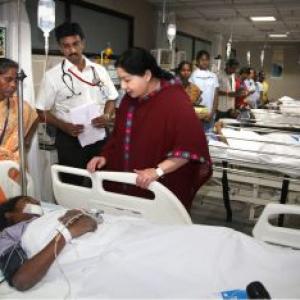