The Indian and Chinese premiers have an unprecedented historical opportunity to create such a mechanism for sharing international rivers.  It will not only help the two countries but it has the potential to create a remarkable example for the rest of the world, says Himashu Thakkar.

Chinese Premier Web Jiabao's forthcoming India visit (December 15-16) provides another useful opportunity for India to be firm and forthright with China on India's concerns about Chinese dam and hydropower projects on the shared rivers, including in the Brahmaputra basin.

The importance of this issue cannot be underscored considering that this issue has been raised in the Parliament several times, even the prime minister has had to make clarifications in the recent past, the people and governments of several states, including Assam and Arunachal Pradesh have been agitated about this. India's Planning Commission, environment, water resources and power ministries have also been raising these concerns.

Unfortunately, India has been less than firm and forthright with China on these issues in the past. The Indian government has informed Parliament in the past that China has not disclosed the reasons for floods in Himachal Pradesh in August 2000 and in Arunachal Pradesh in June 2000, when the floods in both cases originated from China.

China started the construction of the 510 MW Zangmu Hydropower project on the Yarlung Tshangpo (as Siang, the main tributary of Brahmaputra is known in Tibet) on November 12. India reacted to that only after the Indian media picked up the news from international media reports.

Worryingly, the report from the China's news agency Xinhua said the $1.2 billion project "can also be used for flood control and irrigation". For a project to be useful for irrigation and flood control it needs to store and divert water. But even without these features the Zangmu and the numerous other hydropower projects that China plans will have adverse downstream impacts.

The Chinese foreign ministry spokesman Hong Lei did clarify to the media that China took "full consideration of the potential impact on the downstream area."

To illustrate, when an Union minister responded to a question in Parliament about impact of Arunachal Pradesh hydro projects on downstream Assam, the answer was, "No specific information is available regarding threats to existing identity of indigenous people of Assam by mega dams proposed in the north-east".

As a matter of fact, Indian, Arunachal and Assam governments have often justified the expeditious clearance and building of big dams in the north-east, saying that it will establish first user right. The trouble is, firstly there is no international law or mechanism where such a right can be defended against actions of upstream countries. Such a defence would be possible if there was a treaty on sharing the common rivers, like the Indus Treaty that India has with Pakistan.

But no such treaty exists between India and China on any of the rivers that the two countries share. And India has not used its substantial leverage (The delegation accompanying the Chinese premier includes 400 business people and five years back too Wen went back from India after a successful business trip) to push any such treaty.

The only international convention in this regard, the UN Convention on Non navigational uses of international watercourses was approved in 1997 by a vote of 104-3. Interestingly, China was one of the only three nations that voted against the convention. India did not do it a great favour by abstaining from voting.

The convention in any case it yet to come to force since sufficient number of countries are yet to ratify it. But even when it gets ratified, as noted by a task force report (external link) from India's defence think tank Institute for Defence Studies and Analyses, such laws are "difficult to implement and often contradictory".

No effective international court exists for such conflict resolution. Unfortunately, the IDSA report ends up with a rather problematic suggestion, "As a counter-measure to China's plan for the diversion of the Yarlung-Tsangpo, India should propose a south Asian-China-ADB power project with international support on the Great Bend."

Such a suggestion would be seriously counter productive since it will justify the worst feared of the proposals China has of building a 38,000 MW hydropower project on Brahmaputra and diverting it to the northern part in phase two. In fact, China has multiple projects lined up on Tsangpo.

China's track record, however, is far from encouraging in this regard. What is going on in the Mekong basin is a good guide. There exists an international Mekong Commission including countries like the Thailand, Laos, Cambodia and Vietnam, and the commission is backed by powerful Japan and the Asian Development Bank.

But China, which is not part of the commission, has been building hydropower projects which are affecting the downstream existing projects adversely, but the downstream countries could do nothing about the Chinese projects. This completely demolishes the first user principle argument that supporters of dams in Arunachal Pradesh, including environment minister Jairam Ramesh are using to push such projects.

That said, we also need to look at the track record of Indian governments in this regard. When it comes to sharing even basic information about the plans of the government in the north-east, the water resources ministry refuses to provide basic information to the people.

The ministry refused to provide such information to South Asia Network on Dams, Rivers & People (external link) even under the Right to Information Act. Ultimately SANDRP had to file appeals to the Central Information Commission and the ministry had to provide basic information under the CIC orders (external link). But this and the earlier quoted answer in Parliament from the minister show how callously Indian government deals with these issues. India needs to fundamentally change its ways of dealing with the issues related to rivers and dams. Indian government needs to improve its own credibility through more responsive, transparent and environment friendly treatment of rivers and people.

This is also urgently important since the rivers that India shares with China are fed by glaciers, most of which are located inside Tibet. Our knowledge base of these lifelines is very poor and better cooperation is also useful for India in the context of climate change. This has been rightly emphasised by Jairam Ramesh.

The best way to go forward for India, China, Bangladesh (a downstream country along the Brahmaputra) and even the rest of the world would be to follow a multilateral mechanism to share not just the water of the rivers that India and China share, but also the mountains, the glaciers, the forests, the biodiversity and the associated lives and cultures that also get shared. The Report of the World Commission on Dams provides a very useful starting point for such a model.

The Indian and Chinese premiers have an unprecedented historical opportunity to create such a mechanism on these lines for sharing the international rivers.

It will not only help the two countries for generations to come, but it has the potential to create a remarkable example for the rest of the world.

The Brahmaputra, the fifth largest river in terms of water it carries and second largest in terms of the silt it carries, remains relatively less disturbed among the rivers of the world and provides ideal platform for this. Will the Indian government show the firmness, forthrightness and foresight to propose this to the visiting Chinese Premier?  It can only strengthen Indian government hand in dealing with its bigger neighbour. It will also give huge strength to the fragile bilateral relations that the Chinese ambassador to India referred to on December 13 in Delhi.

Himanshu Thakkar
Related News: China, India, Arunachal Pradesh, Assam, Brahmaputra
Print this article
Why India should not get too close to China
A powder-keg on the border with China
Sino-Indian vision: sugar-coated candy floss 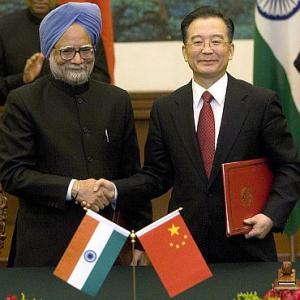