'Manmohan Singh's fond hope of avoiding conflict over territory by 'making borders irrelevant' is increasingly difficult to realise in a world where institutional restraints on aggression are weakening and the new game in town is unalloyed power play,' notes T N Ninan.

Borders have a habit of becoming sacrosanct.

Schoolchildren are made familiar with the shape of their country, with geography usually supported by history, language, religion, and (more broadly) culture.

This is so even in India, which has existed as a cultural entity, but not as a nation-State, from pre-historic times.

Adi Shankaracharya travelled to all corners of the 'country' to establish places of devotional learning in the ninth century.

At the time, the Pallavas ruled in much of south India and the Gurjara-Pratiharas (including the Chandelas) in the north, but of course there were no passports or visas.

Even with the nation-State, most people are not conversant with how and when it took shape.

What they are more cognisant of is its late 19th-century personification as Bharatmata.

Vedic India, for instance, was essentially in the north-western part of the country.

The post-Vedic empires stretched from further east, in Bihar.

And north-eastern India today is the product of wars fought by the British.

Assam came within the national boundary in 1826 after it was acquired by the East India Company from the king of Burma following a bloody war in 1824.

Darjeeling was leased from the Sikkim Chogyal in 1835 for setting up a sanatorium.

Much of Sikkim itself had been taken over by the Gorkhas of Nepal, and handed back to the Chogyal after the British took it from the Nepalese.

Kalimpong and the Dooars became part of Darjeeling district only after a battle with Bhutan, in 1865.

Yet, today, they are all inalienable parts of India, as is Sikkim itself after 1975.

In short, borders are more malleable than one usually imagines them to be.

Contemporary India's maps that showed all of Aksai Chin as Indian territory were first printed only in the mid-1950s, after Jawaharlal Nehru ordered that previous maps showing the border as un-demarcated (and marked therefore with a colour wash) be destroyed.

Such a border had indeed been proposed by a British official in the 19th century, but the British themselves had subsequently preferred a more modest claim to about half of Aksai Chin.

The Chinese have no better historical claim, since Xinjiang (of which Aksai Chin is now an administrative component) was traditionally believed to stop at the Kun Lun mountains to the north.

In the east, the crucial Tawang tract in Arunachal Pradesh fell south of the McMahon Line (to which India holds) only because of a convenient deviation from the watershed principle.

In fact, India did not take proper administrative control of Tawang till 1951, four years after Independence, and it did so because Chinese forces had marched into Tibet in 1950.

In Europe, Italy and Germany did not exist as geographical entities till the second half of the 19th century.

Europe's frontiers changed equally dramatically after each of the World Wars, and then again with the collapse of the Soviet Union.

And the United States would never have stretched 'from sea to shining sea' if Napoleon had not sold the territories east of the Mississippi to Thomas Jefferson in 1803, doubling the geographical size of the US in one stroke.

As for West Asia and Africa, it is well known that their borders were drawn up arbitrarily by imperialists -- often as straight lines on a map that recognised neither tribal identities and territories nor any other principle.

Naturally this set off long-term conflicts between neighbours, and left entire peoples straddling lines on maps (the Kurds and the Pakhtoons).

Borders have continued to change into the 21st century.

Russia has taken over the Crimean peninsula, States in the Caucasus fight over enclaves (each country has its own historical 'facts'), and China has converted atolls in the South China Sea into military bases.

If this history teaches us anything, it is that borders are derived realities and not autonomous facts.

Manmohan Singh's fond hope of avoiding conflict over territory by 'making borders irrelevant' is increasingly difficult to realise in a world where institutional restraints on aggression are weakening and the new game in town is unalloyed power play.

But, come to think of it, when was it really different? 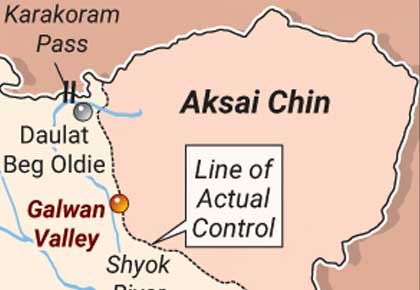