As India suffers and the ruling party is on the defensive, the truth is that the only way that this wave will pass is if exponential growth of the virus stops on its own, asserts Aakar Patel. 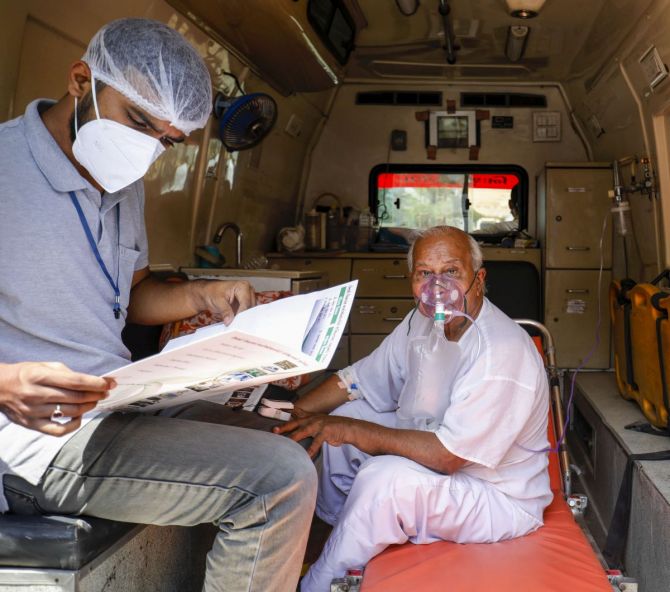 IMAGE: A COVID-19 patient gets primary treatment inside an ambulance as he waits to be admitted in a hospital in Ahmedabad, April 28, 2021. Photograph: PTI Photo

Just before the 2014 election, two of India's most famous economists had a public quarrel.

Because they were academics the language was mostly polite but the disagreement was not minor.

It was about the Gujarat Model. Jagdish Bhagwati took the side of Narendra Modi, and Amartya Sen took the opposite side.

In brief, the Bhagwati-Modi view was to prioritise economic growth over social spending.

Sen's view was that economic growth was not possible without social spending.

Sen did not oppose a liberalised business environment: His concern was primarily what the government did.

Bhagwati did not oppose social spending: His concern was what the government should not do.

Both sides had rational arguments, but Sen had one unanswerable question: Could anyone name a nation that had become developed without a healthy and well-educated population? The answer to that was no.

There is no nation on the world that has ignored investing in the health and education of its population and become developed.

It is social spending that leads to growth and not the other way around.

You cannot have a population that is not very literate and not very healthy and expect that industrialists will do all the work necessary to make a nation developed.

The state and the government have the primary responsibility and function in this area.

The Gujarat Model believes that if the government supports industrialists by offering them subsidies, ease of doing business, freedom from workers' unions and holding vibrant Gujarat melas.

If it does this for a sufficiently long period then the benefits will accrue to the general population because it is business that makes the economy strong.

The Sen model believes that a healthy and educated population is both an end in itself and a means to achieving economic prosperity.

It was in fact possible for the government to create a healthy and educated population even when it had no real economic strength and Cuba is an example of this.

There is no example of a developed nation that had a third world education and healthcare system.

For this reason the state must focus on building a strong education system and a strong healthcare system and prioritise its spending in these areas.

Sen supports schemes like MNREGA and Right to Food, Modi opposed MNREGA and called it a monument to failure.

The Congress party said this week that in 25 years under the BJP, including 12 years under Modi, Gujarat did not build a single new government hospital.

The BJP has not denied the claim, meaning that it is correct.

Of course many Vibrant Gujarat summits were held.

What did they produce ultimately? The answer is not development, whatever definition we can use for it.

Yes it is true that some Gujaratis have become very wealthy even managing to triple their wealth in 2020 a year when many of us lost work.

But for the majority there was no benefit.

The large industries that came up in Gujarat did not employ a lot of people.

This is why the most dominant political community of the state, the Patidars, took to the street demanding reservations in jobs.

The sacrifice that was made by the population for the Gujarat model was very great.

Gujarat was low on the Human Development Index and in 2012 Modi told the Wall Street Journal that malnutrition in his state was because its girls were 'fashion conscious' and didn't want to drink milk.

This sort of contempt and ignorance of fundamental issues has come at a cost to India.

The Sen model is not only about expenditure, it is about state focus.

A government that believes that it is the well-being of its citizenry as measured through their health and education will be geared and organised in a particular way.

It will not be caught scrambling one year after a global pandemic because it does not have enough oxygen or medicines or beds.

The Gujarat Model expected that the private sector would take care of health because it was a business and there would be consumers.

That is not how the rest of the world has achieved it.

It is not necessary to say today that Bhagwati was totally wrong because he was and we can see that all around us.

As India suffers and the ruling party is on the defensive, the truth is that the only way that this wave will pass is if exponential growth of the virus stops on its own.

The intervention of the government is so poor and so weak that it cannot by itself do anything significant to save us.

In the short term we have to suffer the consequences and there is no option.

This is the reason why Modi has been missing from the public eye after stopping his rallies in Bengal abruptly.

The reason why Modi was furious that Arvind Kejriwal showed their interaction to the rest of us was not because it was a breach of protocol, but because the truth was exposed and it was embarrassing.

At a moment of crisis, we are choosing to run away from the fact that core beliefs about what the government should do have been proven wrong.

We should have an honest discussion once again about the Bhagwati and Sen debate and what we should do in the medium and long term. 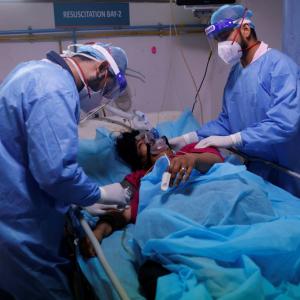 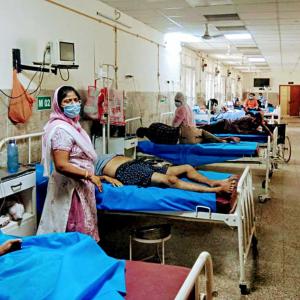