The Indian government today does not care what it does to Indians as long as it can continue on its path, observes Aakar Patel. 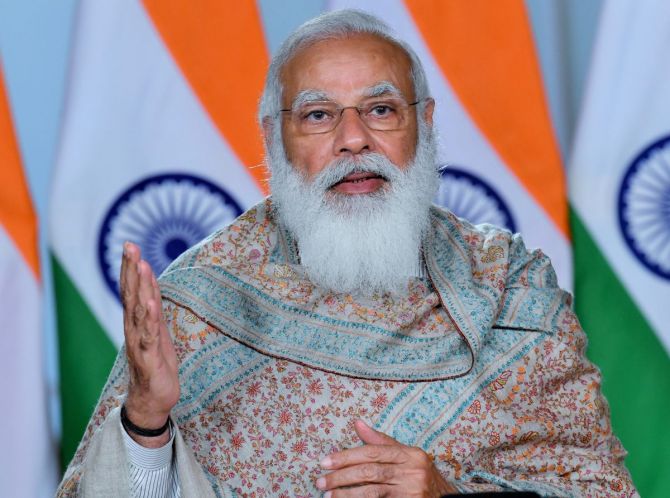 The Washington Post's editorial board has written that India's claim of being a democracy should be put in question.

This headline came after it summed up what was happening in India accurately across the spectrum of governance, from the farm laws being passed without voting in Parliament to young women being jailed because they edited an open-source document.

India's ministry of external affairs did not put out a brave response to this, as it did earlier when a pop star that almost nobody in India had heard of wrote six words ('Why aren't we talking about this?') over a CNN headline on February 2.

India's brave soldiers like Akshay Kumar and Sachin Tendulkar did not respond to the Washington Post either, as they had done to Rihanna.

Presumably the prime minister did not instruct his minions to react because he does not care about what the Washington Post writes whereas the pop star has millions of followers.

The Economist, which is the world's most respected magazine, has carried a headline in its latest issue which reads: 'The Indian government's pursuit of its critics is not just unfair, but hypocritical'.

It says that the Modi government's actions have made it globally look 'mean and silly'.

The government had not responded to this either, though presumably it will have to do something.

One reason is that The Economist has referred to the Indian government's promotion of Guruji Golwalkar through an official tribute earlier in February.

The magazine told its readers that 'Mr Golwalkar believed that Nazi Germany's management of its Jewish problem 'represented a good lesson for us in Hindustan to learn and profit by'.'

Let us examine what the Washington Post has claimed, that we are not a democracy.

The West does not see democracy beginning and ending at the polling station.

It has to be accompanied by civil liberties, fundamental rights and access to justice.

All of these ingredients together form what the government structure which they consider democracy.

In our case, we believe that elections are democracy.

But there is a problem here. India achieved freedom at the group level in 1947.

Independence meant that control of the State was transferred from a set of people led by foreigners to Indians entirely.

This gave Indian citizens the space to determine how to govern themselves and write their own laws to enjoy individual freedoms and civil liberties.

Freedom at group level meant essentially the right to vote.

This was available though restricted in the British period also.

Freedom at group level liberated India from a system that had already included voting rights, legislatures and lawmaking ability for Indians. It was on limited subjects however.

After 1947 India should then have focussed on individual freedoms so that the exercise could be deepened.

Here India stumbled. The State (meaning the apparatus of government) did not relinquish its rights to citizens.

It contested the space and asserted itself over citizens on essential freedoms.

do not exist in India today.

These rights are Fundamental, which enjoy a high degree of protection from encroachment by the State.

But they are not available to Indians today despite what the Constituent Assembly wanted.

The State has taken them away and many never existed in the first place.

There are so many laws that regulate and criminalise free speech that it is difficult to know where to start.

Sedition, criminal defamation and criminal contempt are a start.

They don't exist in the nations where our laws our derived from (India's Constitution is not based on Manu Smriti, but constitutions of other nations).

The Supreme Court in the 1950s ruled that while the Constituent Assembly had guaranteed freedom to practice 'any' profession or 'carry out any occupation', it could not allow butchery of cows because that offended Hindus and while the Constitution was supreme, Hindu sentiment was more supreme.

The State has sought to regulate these freedoms by so called 'reasonable restrictions' which have overturned the rights themselves.

This has always been the case in India.

However, this government has pushed the rights of the State over the rights of Indian citizens to the point where it will crush individuals who stand up to the State.

This is what the Washington Post and Economist are writing about.

The reason the Indian government is silent on these accusations is that they are true.

We can tell a pop singer to shut up because she is a young woman.

It is slightly more difficult to tell the Washington Post and Economist to get lost and so silence is the next best option.

What is left unsaid is that this is not something that will pass over.

The Indian government's continued actions and its refusal to reverse what it is doing to its citizens has come at a cost to India's global reputation.

We are too close to the story as it unfolds before us in real time today to be able to calculate what this cost is.

But it is substantial, and entirely avoidable.

It is a different matter that the Indian government today does not care what it does to Indians as long as it can continue on its path.