'Govt wants 1.38 bn Indians to be yes men of the ruling party'

'It is a sad day when social activists, environmental campaigners, anti-corruption workers are singled out as anti-nationals and then criminalised.' 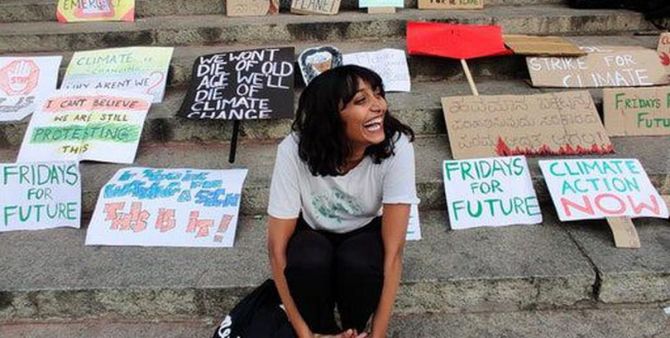 The Narendra Damodardas Modi-led government is planning to launch a programme to identify online activities deemed to work against the 'sovereignty of the nation', inviting people to register as 'cyber volunteers' in a move that has fuelled civil rights groups' fears of online vigilantism.

The home ministry opened an online registration portal to recruit participants for the scheme, in which anyone can register to report unlawful content on social media. The ministry portal lists a few broad categories of offences that it asks volunteers to flag.

Besides unlawful content such as child pornography, the list includes content deemed to be against the sovereignty and integrity of India, defence and security of the State, and friendly relations with foreign nations, without providing any definition into what constitutes such offences.

The programme has already started, reportedly as a pilot, in Jammu and Kashmir, after the Internet restrictions were lifted from the disputed territory on February 5 after 18 months of shutdown.

However, rights activists and social media users have voiced their concerns over the new programme and the government's attempts at clamping down on critical posts. The lack of a legal framework is also raising questions, as the ministry is yet to provide more information on how the programme would work.

"The aim is clear -- threaten, intimidate and silence anyone from questioning the government -- its leaders, policy makers and their favoured people," People's Union for Civil Liberties National General Secretary and human rights lawyer Dr V Suresh tells Syed Firdaus Ashraf/Rediff.com in the first part of a revealing interview.

The Modi government is planning to have cyber volunteers report on 'anti-national' activities. Will this move infringe on citizens's rights?

The plan to organise 'cyber volunteers' is not only an infringement of citizens' rights but also constitutes a grave threat to civil liberties, especially freedom of speech and right to dissent, and amounts to an abuse of law by the government.

This vigilante force will then be used to keep watch on citizens, not just the prominent, well known personalities, but ordinary citizens -- to keep tabs on what they are sharing, writing, expressing.

Anyone expressing an independent point of view, different from the ruling party's position or the government's policies, will then be identified, reported and eventually prosecuted.

It is a 21st century creation of George Orwell's 1984 -- a sinister State which spies on all its citizens, constantly 24x7x365.

Under our Constitutional scheme, power and authority have been given only to police officials and other monitoring agencies for legitimate use against law breakers.

The idea is that if at all any action is to be taken, it should only be taken by an authority duly appointed under law.

So, if there is an excess or violation of the law, the victim and others can question it in the court.

But the proposal now is of appointing '[cyber volunteers' on behalf of the police; in effect they are going to be completely unaccountable in law, for violating laws.

The important question is, to whom will these so-called 'cyber volunteers' be accountable to?

These volunteers will be accountable to the police and they will have to sign some kind of undertaking before being appointed.

This is most absurd; what this means is that the government is sub-contracting the job of the police to volunteers. This is unconstitutional. For argument's sake, if they are doing some consulting service to the police, then that is one thing.

But then, what will the 'cyber volunteers' be doing? Obviously they are not getting appointed to check the grammar and improve the language of people. They will be monitoring and keeping track of people, which will eventually lead to criminal cases.

To put it differently, this is work which is prosecutorial in nature, which will result in police action against citizens, which will be taken under the garb of 'lawful action'.

As the law stands today, when criminal action is taken under law, it can only be initiated by a police force which has been empowered by the law; it cannot be done by people who are sub-contracted the job of the police. This is dangerous.

The basic premise is that if you are appointed through the legal process, then you are accountable for the use of that power. And then you (as a citizen) can go to court if there is abuse of law.

We have experience of the Tamil Nadu police which started a volunteer force called the 'Friends of Police'. While the idea in its genesis may have been well meaning, in effect what it has resulted in is to give a sense of extra judicial powers to these volunteers which they use unfairly in a caste-communal-class divided society like ours.

In the custodial murders which shook the nation in July 2020, one of the allegations which kept recurring was the role of the 'Friends of Police' volunteers, of how they have turned into an antithesis of what they were projected to be!

Right now, it is proposed that these volunteers are going to be appointed only in Kashmir and Tripura and not all over India.

The government is floating a balloon and seeing the response.

We are talking about the model and not where it is going to be implemented.

It is very serious and a dangerous threat to the rule of law.

The key question to examine is, what will these volunteers be doing?

They will scan social media posts and looking out for what they consider to be anti-national.

This precisely is the issue and the danger. What is anti-national?

Only a court can say what is national or anti-national.

How can people who are not duly authorised or empowered determine what is anti-national or not?

This present government has criminalised not just dissenters; in recent months they are going after people who are only expressing their opinions, let alone dissent or oppose the government or its policies.

Holding an opinion against the government is now becoming dangerous.

What the government is doing is to weaponise the law and crushing democratic activity.

If you see the Greta Thunberg case then you will know how she was using Google Tool Kit to spread anti-India campaign. In such a situation what do you do?

Not her post, but the use of Tool Kit...

This is laughable. The practice of 'tool kits' is as old as 100 years.

The idea of the 'tool kit' merged from conducting training exercises for leadership training and team building activities. The tool kit listed the activities and training materials a person should collect to conduct a training programme. It listed the dos and don'ts.

For example, if there is a tool kit for a media campaign, it will explain how to write media posts and messages. It reminds people of common mistakes we do -- don't forget dates and time and place; find out the address of whom you should address your statement to; how should you address your statement -- for example, should you address the president or prime minister or chief minister differently. Whom should you refer to as 'Your Excellency' and who should be referred to as 'Honourable M So& So'.

The idea of a tool kit is to guide newcomers to any activity in terms of how to campaign. From training games and social programmes, tool kits were evolved for education, environmental campaigns and so on.

Only after I saw the so called 'tool kit' I realised it was just another set of instructions for anyone wanting to write representations to the President of India and the prime minister and other dignitaries.

It is absurd to say this 'tool kit' is dangerous.

What is dangerous is the mindset of people who attacked a 18-year-old climate activist as though she was a global terrorist!! To say that international people are using the tool kit to downgrade India's prestige is ridiculous.

Interestingly, see the way sports and Bollywood celebrities reacted to Rihanna' tweet about the farmer's agitation with similarly worded and copy pasted messages.

When so many celebrities tweet similarly sounding messages, is that also not part of a tool kit strategy of the ruling party and government?

The problem today is that the government wants all 1.38 billion people of India to be 'yes men' of the ruling party.

They want only goats and sheep.

Anybody asking, even remotely, questions about any government policy will be treated as the enemy of the country. As a traitor -- gaddar.

It is a sad day when social activists, environmental campaigners, anti-corruption workers are singled out as anti-nationals and then criminalised.

The aim is clear -- threaten, intimidate and silence anyone from questioning the government -- its leaders, policy makers and their favoured people. 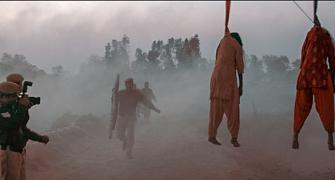 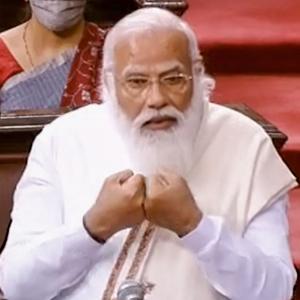