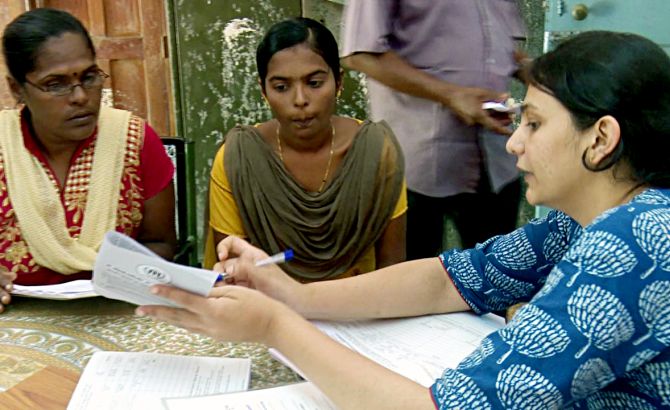 At a time when the ruling Bharatiya Janata Party at the Centre is eyeing positive poll signs from ‘Dravidian’ Tamil Nadu in the assembly polls due in 2021, the already controversial Citizenship Amendment Bill may come as an additional dampener for the party.

This would be equally so, whether or not the Bill becomes law and is cleared or cancelled by the higher judiciary.

Tamil Nadu has a long history of refugee arrival, relief and rehabilitation, even if not on par with the north Indian border states. It definitely has been home to more refugees of ‘Indian origin' than most, if not all central Indian states put together.

Since Independence, the state has welcomed, whole-heartedly, both from the side of the local government and the neighbourhood population, Tamil-speaking refugees from Burma, now Myanmar, and later Sri Lanka. The Sri Lankan hordes came in batches, belong to distinct local ethnicities and over different issues.

It should be shocking for contemporary India to learn that independent Sri Lanka, then Ceylon, passed two pieces of legislation one after the other -- targeting their own ‘Upcountry Tamil community’, otherwise known as ‘Indian-origin Tamils’ (IOT) or ‘estate Tamils’. The process of disenfranchisement and later statelessness commenced in the very year of the nation’s Independence, 1948.

A section of the ‘native’ polity of Sri Lankan Tamils (SLT), who got caught in the continuing ethnic issue in the island-nation, actually voted in favour of the twin measures of what otherwise is trumpeted as the ‘liberal’ United Nationalist Party. That the anti-SLT ‘pogrom of 1983’ occurred again when the UNP was in power was possibly not a coincidence.

In the case of the SLT polity that backed the government efforts to disenfranchise the Upcountry Tamils possibly owed from the realisation that their continued stay and procreation could have led to a ‘demographic disadvantage’. For the Sinhala majority, it was looking for twin solutions.

One was more jobs for Sinhala-Buddhist estate labour, going to the Upcountry Tamils of recent Indian origin (dating back to 150-200 years, under the common British colonial rule).

The other and more immediate factor was to deny the existing ranks of multiple communist politico-electoral entities in the country, the ‘committed votes’ of the estate labour, both Sinhala and Tamil-speaking.

A substantial section of the estate Tamils returned home to the embrace of Mother India, under the Nehru-Kotelawala Pact (1954), ‘improvised’ under the Srima-Shastri Pact a decade later. Once persistence had paid, goes an argument, the ‘Sinhala-Buddhist hard-liners’ in Sri Lanka seemed to have concluded that if the Sri Lankan Tamils (SLT) were similarly forced out of the country, lawfully or otherwise, India would readily accept them, too.

This was said to be among the ‘hidden causes’ for pogrom 1983, when in 1983 Sinhala-Buddhist mobs targeted SLT communities across the country, with the State apparatuses, including the armed forces and the police standing by, watching.

Today, there are close to a 100,000 refugees from Sri Lanka across camps and outside in Tamil Nadu. When the late M Karunanidhi was the DMK chief minister of the state the last time round (2006-11), he wrote to then Prime Minister Manmohan Singh, to offer Indian citizenship to the refugees, or whoever wanted it.

The general belief, despite arguments to the contrary, is that most refugees, especially in the camps, might think twice before consider going back their nation, or even taking Indian citizenship, if offered.

There are enough reasons for them not to go back home in the foreseeable future. It depends on a sense of personal and community security, including economic security, but there is none at all in present-day Sri Lanka, especially in the war-time Tamil areas.

It is anybody’s guess whether the local Tamils, who have gone through the travails of the war, would want to welcome them back home, despite projections to the contrary. No Sri Lankan government since the end of the ethnic war a decade ago, has said or anything encouraging for them to return.

In the context of the current political situation in Sri Lanka and given the sudden surge on ‘Indian citizenship issue’ in the host nation just now, the SLT refugees may begin revisiting their concerns and aspirations. Some may even consider accepting Indian citizenship, if and when offered, if only not to die as ‘stateless’ people of some kind -- having become ‘homeless’ long ago.

That way, the CAB debate, watched on live TV news and talk-shows across Sri Lanka, may end up giving fresh ideas to ‘Sinhala-Buddhist’ hard-liners, both inside and outside the government of President, Gotabhaya Rajapaksa.

If pan-Tamil peripheral groups in Tamil Nadu take up the CAB issue from the perspective of Sri Lankan Tamils, there is no denying the presence of a few Muslim families among the refugees. In the eyes of ‘Hindutva’ hard-liners in the state, some of these peripheral pan-Tamil groups could end up making the ‘Muslim angle’ a core element of their pro-refugee protests.

This is because the CAB, as it stands, refers only to non-Muslims from Afghanistan, Bangladesh and Pakistan.

Going beyond the Tamil/Tamil Nadu angle, India has such ‘colonial Indians’ settled across wherever the British colonial masters took them as indentured labour -- across Africa.

There also those Indians that the French colonial masters in parts of India settled in such faraway nations like Reunion Islands and Fiji.

In some of the smaller nations, Indian-origin people account for more than half the population.

With less than 40 per cent populations, Indians have been at the receiving end of political upturns in the Indian Ocean island of Fiji, where they have come from north Indian states like Haryana, too.

The ‘overseas’ Indian population comprise Tamils and other linguistic in cultural groups from across what is now acknowledged the world over as a ‘united and unified India, that is Bharat’. The current apprehension is a half-understood interpretation of the Indian CAB in those distant lands.

In a way, Myanmar, now under Nobel laureate Aung Saan Suu Kyi, is continuing to do to Rohingyas what the predecessor junta did earlier. It had begun with Indians, many of them from the mercantile ‘Nattukottai Chettiar’ community of (former Union Finance Minister P Chidambaram) and those serving them in the distant land for generations and centuries.

Today, at a time when Suu Kyi is defending her government at The Hague just now, the Centre needs to take a closer look at possibilities under the international law, going beyond the UN/UNHRC kind of resolutions, which may otherwise become possible.

New Delhi should also be equal to the possibilities of CAB drawing into the international debate other recent issues such as Article 370 and the National Registry of Citizens (NRC).

In the US, which still sets the human rights yardstick for the rest of the world even while happily violating them and causing new violations, two panels have already condemned CAB, for being discriminatory against Muslims. More may follow, causing an estrangement in bilateral relations.

It has since hit the roof under Prime Minister Narendra Modi, whether it was a Democrat tenant of the White House, in Barack Obama or a Republican in incumbent Donald Trump. All that may change, if top-level relations are misunderstood in each other’s capital in the light of ‘independent criticism’ of India in the US.

No thanks to the ‘Kulbushan Yadav case’, almost every Indian with access to a television news channel and/or a social media communication in any of the Indian languages especially, have become familiar with the ICJ. For them all, celebrating the ICJ condemnation of Pakistan was one thing. Bringing up themselves to accepting India being hauled up before the ICJ, or even UNHRC, is another. To them, UNHRC is only for nations like Sri Lanka, Myanmar, Israel or whoever, not for ‘Mother India’.

This is not to leave out such other criticisms of the Article 370 kind in European capitals over the past couple of months. If Pakistan did not have any backers in the UNSC even for an informal anti-India  discussion, with or without a ‘statement’ for consideration post-370, it may not be the same post-CAB.

Those nations that did not want to be seen as identifying with Pakistani terrorism over 370 may now have a stand-alone cause to haul up India, be it before UNHRC or UNSC, if not ICJ, the Myanmar way.