'Gotabaya will expect India to observe the red line.'
'He even dispensed with any gesture welcoming India as an interlocutor on the Tamil issue.' points out Ambassador M K Bhadrakumar. 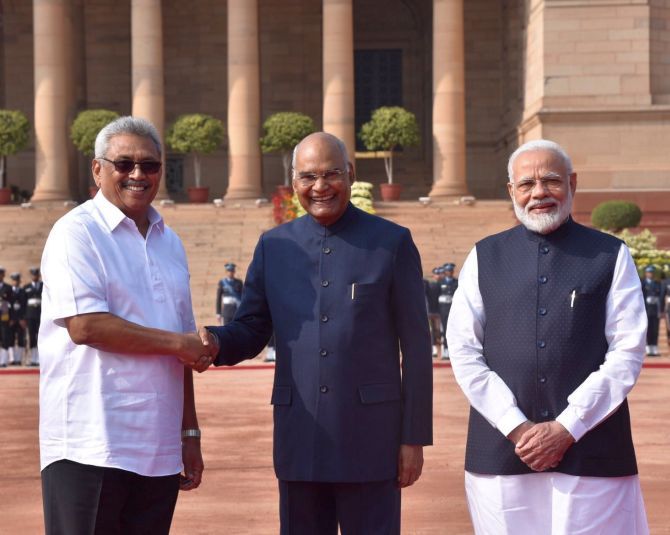 Sri Lanka is a role model for the dictum of diplomacy being the extension of a country's national policies.

Sri Lanka's performance must be commended since it also grapples with an unresolved nationality question in which its big neighbour India has historically staked claim as stakeholder, a claim that Colombo cannot brusquely repudiate due to the huge asymmetry in their comprehensive national power.

Having said that, Sri Lanka also cannot do without India's goodwill and cooperation, considering that its big neighbour has so much to offer in political and economic terms, and, conversely, also has the capacity to cause serious injury if it so chooses.

Therefore, the game narrows down to keeping India engaged 'constructively' while keeping the wolves at bay to ensure that Sri Lanka retains its strategic autonomy.

There have been good times and bad times in the relationship -- and some very bad times too when India felt provoked and hit out, such as in the eighties by fuelling the Tamil insurgency.

But on the whole, Sri Lankan diplomacy managed to string the north Indian ruling elite long.

A top Sri Lankan foreign ministry official in Colombo in the early eighties once told me that where Sri Lanka had an advantage over India was in its tenacity and perseverance since its diplomacy almost single-mindedly worked on variations on a fundamental theme -- the Indian conundrum.

The result is plain to see in the one-sided bilateral pacts -- the Srimavo-Shastri Pact (1964), the Katchatheevu Accord (1974) and, indeed, the disastrous Indo-Sri Lanka Peace Accord (1987).

As a strong leadership (re)emerges in Colombo under President Gotabaya Rajapaksa after the disarray of the past four years, the wheel seems to have come full circle.

In a historical perspective, Gotabaya draws comparison with late J R Jayewardene -- robustly nationalistic while a pragmatist too, who is open to 'win-win' cooperation.

Indira Gandhi spurned JR's overtures for a modus vivendi despite her overarching friendship with Sirimavo Bandaranaike, and all signs are that despite Delhi's warm close ties with Ranil Wickremesinghe, Gotabaya is open to a fresh start.

There is an eerie similarity in the self-confidence exuded by JR and Gotabaya in their search for an equal relationship with India.

Both JR and Gotabaya can be regarded as 'patriarchal' in their political style -- austere and result-oriented.

Compared to the previous government under Maithripala Sirisena, Gotabaya has slashed the strength of his cabinet by half.

Delhi laid out a red-carpet welcome for Gotabaya's State visit last week, but he came by a commercial flight, accompanied by just a handful of aides.

But Gotabaya is no doubt as tough as nails, every bit like JR used to be.

While in Delhi last week, Gotabaya didn't bother to contradict the Indian media's unilateral interpretation that he proposed to 'renegotiate' with Beijing the deal granting Hambantota port to Chinese company on a 99-year lease.

Xinhua news agency reported that in the meetings in Colombo through Sunday and Monday between the Sri Lankan leadership and visiting Chinese special envoy Wu Jianghao, the two countries have agreed to speed up the implementation of cooperation on big economic projects, including the Colombo port city and Hambantota port, 'under the existing consensus'.

Xinhua added that 'on the basis of the existing consensus, the two countries will draw up and promote a new blueprint for future cooperation.'

Wu and the Lankan leaders also agreed to 'further strengthen robust political trust between the two countries and upgrade their pragmatic cooperation.' (Wu, by the way, used to be China's ambassador in Colombo during the Mahinda Rajapaksa presidency.)

Gotabaya's remarks, while in Delhi, will need to be deconstructed carefully.

External Affairs Minister Dr Subrahmanyam Jaishankar told Parliament after his hurried visit to Colombo that he expected Gotabaya to keep his word that he'd be president of 'all Sri Lankans' -- implying apparently that the Tamil community would get a fair deal.

But, arguably, what else could Gotabaya have said? Didn't PM Modi also say much the same thing in 2014?

From Gotabaya's remarks, it is apparent that the search for a political settlement of the Tamil question as such (within a federal set-up and so on) will remain on the back burner for the conceivable future.

He believes in the Chinese dictum that solutions to nationality questions are to be found through development -- and development is a continuous process and no timeline can be put on it.

Gotabaya added that the bottom line is that any solution to the Tamil problem will have to be based on the consensus within the Sinhala majority community.

Gotabaya didn't draw the analogy of the Kashmir problem, but he made a compelling point.

In retrospect, Delhi made a diplomatic faux pas with Jaishankar rushing to Colombo to broach the Tamil issue upfront on day 1 with President Gotabaya.

Gotabaya hasn't wasted that opportunity to draw the red line for Delhi.

The government should have learnt from the rebuff it received once over the drafting of Nepal's new constitution.

Gotabaya will expect India to observe the red line.

He even dispensed with any gesture welcoming India as an interlocutor on the Tamil issue.

To borrow the words of the Modi government, Gotabaya regards the Tamil issue as Sri Lanka's 'internal matter'.

The big picture, certainly, is that Gotabaya has nipped in the bud any US-Indian game plan to pressure Sri Lanka on the human rights front to force it to get on board the Indo-Pacific bandwagon.

On the other hand, Gotabaya seeks constructive engagement with India.

He welcomes big investments from India (and its Quad partners) -- but only to match and not to replace Chinese investments.

Gotabaya turned the table around by forewarning Delhi that if it remains tight-fisted, 'The Chinese will take the Belt and Road Initiative all over'.

He underscored thereby that Sino-Lankan economic cooperation is not a topic of discussion.

To be sure, he has no agenda to threaten India's vital interests and concerns.

From present indications, it is unlikely Colombo will countenance Indian presence in any project of strategic significance such as the Trincomalee oil farm, Matale airport, etc.

Aside the resistance in Sinhala public opinion, there is the lingering trust deficit resulting from the conspiratorial manner in which Mahinda Rajapaksa was ousted from power in 2015.