News
Business
Movies
Sports
Cricket
Get Ahead
Money Tips
Shopping
Sign in  |  Create a Rediffmail account
Rediff.com  » Movies » 'Whenever he came on screen, he had a lot of intensity'

'Whenever he came on screen, he had a lot of intensity'

'He was a very shy man of few words. Whenever we spoke about girls, he would run away.' Actor Pankaj Dheer worked with Irrfan in the early days of the latter's career in the 1990s television series Chandrakanta.

"He was a strapping young fellow trying to prove a point," Dheer remembers in this conversation with Rediff.com Senior Contributor Rajul Hegde.

I worked with Irrfan for three years in Chandrakanta.

He was a young lad who had come from Jaipur with a lot of aspirations to become an actor in Mumbai.

Chandrakanta was perhaps his second or third show.

He was raw, one of the brooding actors from NSD.

Theatre and cinema is different, so he had to accommodate himself to cinema.

He was a very shy man of few words. Whenever we spoke about girls, he would run away.

I remember when we were doing Chandrakanta, he was a strapping young fellow trying to prove a point.

He played the role of Badrinath. Later, he went on to play a double role in the same show.

He was shy, but very keen and observant. He picked up all the nuances of the story quickly and brilliantly.

He would always discuss with us.

At that time, we didn't know where his career would go because he didn't say much. But whenever he came on screen or said his lines, he had a lot of intensity.

He had his own style of performing.

There would be days where he would not get a dialogue.

I still remember very clearly that he would tap on my shoulder and say 'Pankajbhai, aat din hue dialogue nahi bola koi (it has been eight days since I said a dialogue).

Then we used to work out a question-answer between ourselves in the scene, and I would pass on a couple of lines to him.

Of course after that, his graph went up beautifully.

He was blessed with the right kind of films and roles, and he never looked back.

He was the perfect derby horse.

He became a very fine actor. I loved him in Maqbool, Paan Singh Tomar, Piku and Haasil.

We were friends, but not great friends.

We would bump into each other at my studios (Pankaj owns studios in Mumbai), where he would come and work.

Once I bumped into Irrfan at the J W Marriott hotel in Mumbai.

He looked a little pale and I asked him if everything was okay.

I told him, 'Look after yourself because you are not looking well.'

He hugged me, but he never once said that he was unwell.

That was just the beginning of his (cancer) treatment, I think.

He has a brave wife.

She is an intelligent writer.

They made a nice couple.

It's very sad for him go away like this.

This was the time for him to go to greater heights.

It's a great loss for the industry, but I think God has other plans. 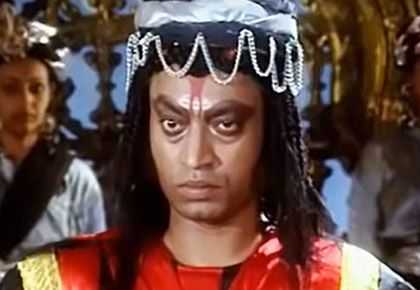 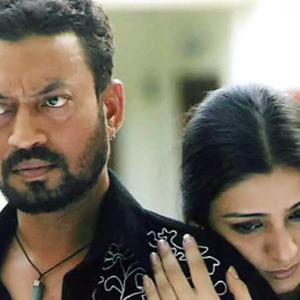