News
Business
Movies
Sports
Cricket
Get Ahead
Money Tips
Shopping
Sign in  |  Create a Rediffmail account
Rediff.com  » Movies » 'He was free from the shackles of glitz and glamour'

'Irrfan was known in his friend circles as a Sufi-esque man who was never detached from any incident, person or situation,' remembers Rajesh Abhay, a friend of the actor since their days at NSD. 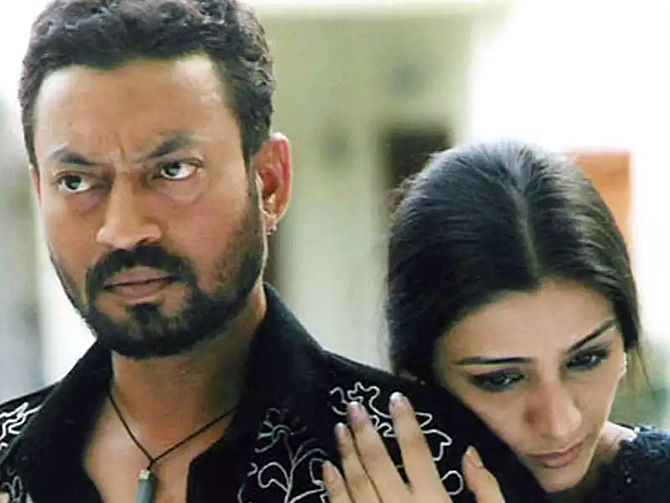 Irrfan Khan was a unique talent who broke class, caste and religious barriers to reach out to people and make a space for himself in their hearts through his distinct and alive acting style.

This is why, his passing away feels like a personal tragedy for his fans across the globe.

Irrfan, known for The Warrior, Maqbool, Paan Singh Tomar, The Namesake, passed away on Wednesday after losing his battle with a rare form of cancer at the age of 54.

I met Irrfan in my third year at the National School of Drama. We soon became friends and remained friends till his death.

Irrfan was known in his friend circles as a Sufi-esque man who was never detached from any incident, person or situation.

On the contrary, he would try to live through whatever he was confronted with, often seeking out the meaning behind the same.

He was someone who believed in drawing the reality of the man and community through his portrayals.

When one would ask him about his process of picking up his projects, he would thoughtfully say, "A film with a tight structure and characters that are both interesting and highlight the complexities of the society." In his NSD days, Irrfan was known for striking a balance between the acting techniques of Russian theatre legend Konstantin Stanislavski and German theatre practitioner Bertolt Brecht.

While Stainislavski emphasised on method acting, Brecht believed in imbibing the mental and emotional statement of the character and develop a relationship with it.

Irrfan's friends, including Tigmanshu, believe he had gone beyond method acting and had developed his own technique which could resonate with the public. They believe it is impossible to learn what Irrfan could do.

Tigmanshu said Irrfan stood out because other than his passion for acting, he never behaved like a star.

The most special thing about Irrfan was that apart from his passion for acting he had no other quality of a star. He was like any other normal person around. He was free from the shackles of the glitz and glamour of movie business.

For the actor, social objective was more important than money, but he was also someone who didn't believe that cinema is 'pure art'.

Some 'artistes', he thought, made films on social issues for their own satisfaction and when such movies get acclaim from a handful of people, they felt content. But these films never reach their target audience. The National Award winner, who went on star in Bollywood films and world cinema such as The Lunchbox, Life of Pi, Piku, Hindi Medium, believed a good film is over and above the boundaries of language, country and cultures and speaks to the audience as someone their own.

Talking about the time when he was selected in NSD, the actor said his family members were not supportive but they had to bend before his passion.

"With a lot of arrogance and a belief that 'I'm embarking on a new journey of my life', I sat in the rickshaw with a holdall to catch a bus from Jaipur. I lied to my mother, I said I will become a professor after graduating from drama school," he once said. During an interview, I had asked him about the moment acting drew him in. Irrfan said he realised the power of acting as a teenager after watching a film featuring Hollywood icon Marlon Brando.

"There were scenes in the film in which he had no dialogues. But as an audience I could understand his feelings and confusion. I was shocked to see this magic, where without even saying a single word, he could explain everything.

"This was the first step towards falling in love with acting. Looking at Brando I felt as if there was electricity in the air around him. There was an energy which made it possible for him to touch the heart of the audience."

Once I quizzed if NSD made him an actor, to which he replied, "An organisation can never make anyone an actor as acting is like meditation. An actor has to work a lot on himself and needs to build a relationship with anything in front of him without any preconceived notion.

"But every actor should develop his own definition of acting. To be a good actor, one needs to be a good person first. When you sink into the details of a character, then even your silence starts speaking, which connects the audience with you on a spiritual level."