'Making Billa 2 was a fascinating experience' 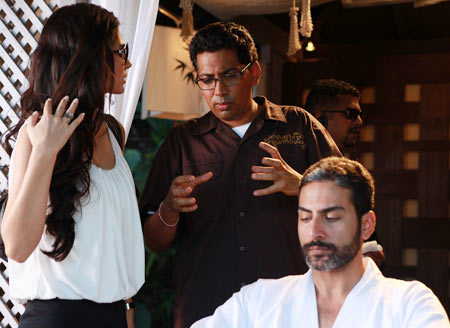 Amid huge expectations, his second directorial venture, Billa 2 with Ajith in the lead will release tomorrow.

In this exclusive intervie w, Chakri Toleti talks about the making of Billa 2.

The first Billa was directed by Vishnu Vardhan. When you were made the offer to direct the second part, did you think twice before accepting it?

I was signed by the Hindujas to direct a film, and we were working towards another film. But when they offered me Billa 2, I went to Chennai and met Mr Ajith and had a long chat with him.

We found we were on the same wave length. Only after that, did I accept the offer.

'It was not my idea to make a prequel to Billa' 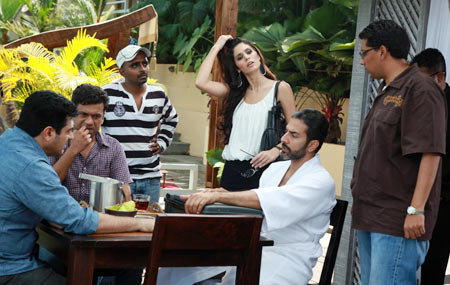 What was the discussion you had with Ajith?

Actually it was nothing to do with the film. What we had was a general conversation, mainly to get to know each other.

Was it your idea to make a prequel to Billa?

No, it was not my idea. By the time I came into the picture, Ajith and the production house had decided to make a prequel.

I came in later. But after I joined, I started with a fresh idea-- the flashback in Billa's life as the focal point. With the help of a team of writers, I wrote the story.

While writing the story, how did you look back at the life of Billa?

Shakespeare once said, there are only seven stories you can tell: man vs man, man vs woman, man vs god, man vs machine etc.

Here, it is man vs self. It is his journey and his ambition to become somebody. It is a straightforward, simple story, not complicated at all.

'Every film has to be approached differently' Could you visualise the earlier days of Billa and how he became what he is?

Yes, I could. Such a journey and story is there in every person. How and what makes a person who he is later on in life is the environment he is exposed to.

You mean the society?

The society, family, people he meets...all these will have a huge impact on every person.

Compared to Unnaipol Oruvan, how tough was making this film?

I wouldn't use the word challenge, but every film has to be approached differently. 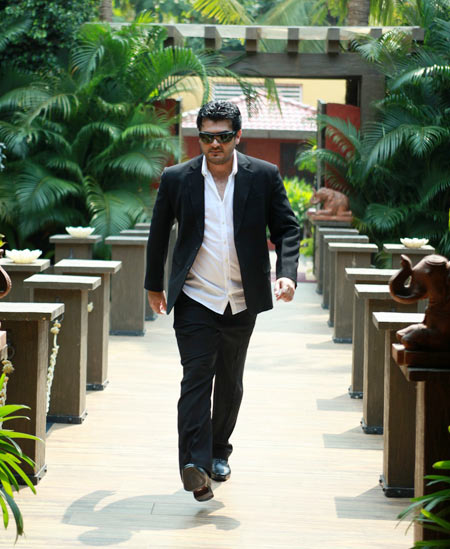 What was the approach that you had for Billa?

I just wanted to stay true to the story, true to who Mr Ajith is. A lot of times, you understand the person who comes on screen and then approach the film and the character. In fact, that determines many aspects of the film.

Does that mean you changed the character based on the personality of the actor?

I think it's a natural process any film goes through. If you give the same story to a different director with a different actor, the approach will change.

Has it anything to do with the expectations of the fans of these actors?

I think you have to understand who your audience is when you are making a film like Billa, and with an actor like Ajith.

It helps quite a bit in your approach. But not to the point that it affects the story.

When you have to think of the fans of an actor, does it not put restrictions on the creative freedom of the film maker?

Not really. You do have some restrictions but not much in the case of Billa.

We were quite open about how we wanted to approach the film, and we did it that way.

'I am learning filmmaking every day' 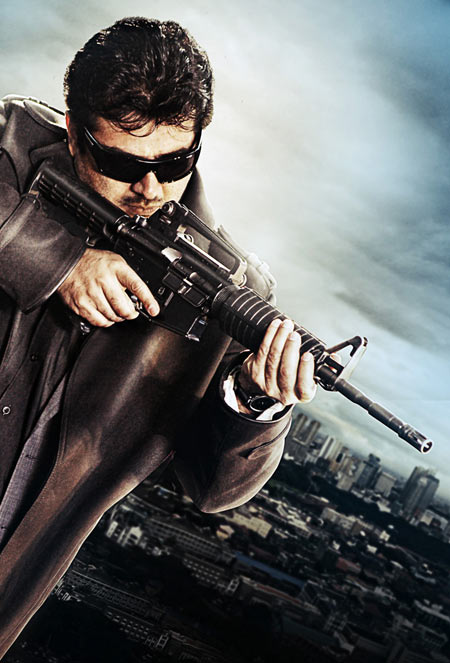 When you made Unnaipoil Oruvan, did you think of the audience for Kamal Haasan's and Mohanlal's films?

Not really. In fact, even for this film, I was not focused fully on who was going to watch the film but what the product is.

The story demanded certain elements and a certain treatment and we stuck to the story.

A combination of both. In stories like these, there is no one specific approach. If it was a different character, we might have had the option of picking one.

For the story of someone who goes through the process of becoming a don there have to be different paths to approach, emotionally and otherwise.

When you look back, was the making of Billa 2 smooth sailing?

You look at the logistics involved in the making, and yes, it was not exactly smooth sailing. But then that is a part of the process of film-making. You have to go through Murphy's Law and certain constraints one has to go through as a film-maker

'Billa 2 fall in the action genre' 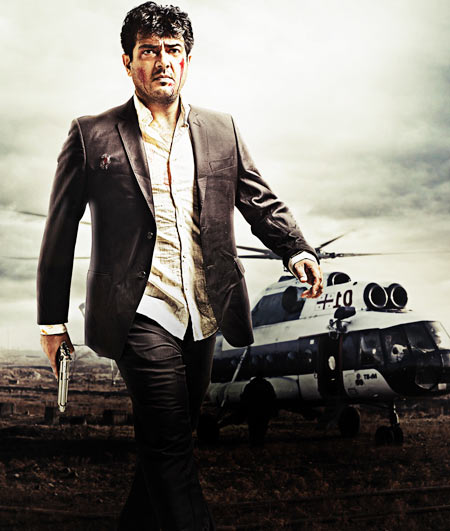 What were the constraints you had to go through?

Schedule, logistics...there are so many, especially in a creative field when multiple people come together to make a creative product. It is tough to manage the process.

In India, we approach everything in a different way which gives you a set of constraints. I am learning and I learn every day. It's just my second film.

While shooting on location, did you have to face unmanageable situations because of Ajith's fans, like it happened recently in Bangalore?

Not that much. Fortunately, we were shooting in places in Goa where we didn't face much difficulty.

Billa 2 is a prequel. Where does his life begin? 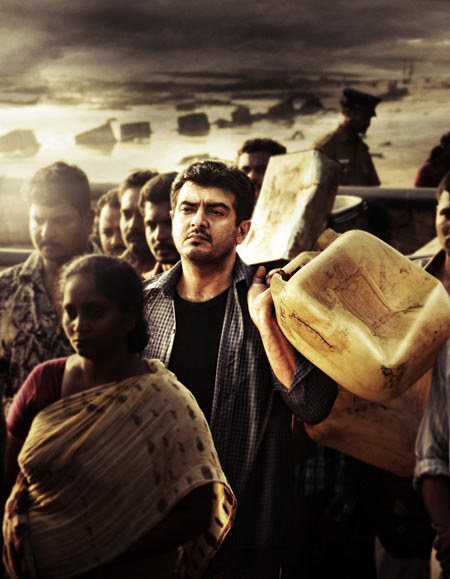 Why did you choose to shoot Georgia?

Because the government of Georgia was giving us good benefits to go and shoot there. We were able to get interesting locations, helicopters and a lot of support from the government.

Is there a lot of action in the film?

Yes, it does fall in the action genre. It has lots of action, songs, romance, etc.

How tough was shooting hardcore action?

Hardcore action is really tough. We tried to keep most of the action in the film realistic. Mr Ajith did all the stunts himself without any doubles. He has done an amazing job.

Worth mentioning are the helicopter scenes. I was shocked when he performed them. I used different action directors like Rajsekhar, Stephan and Keshav in the film.

You had acted in films as a child. So, are you the kind of director who enacts the scenes to your actors?

No, not at all. I am not good at enacting scenes (laughs). I am learning my limitations. 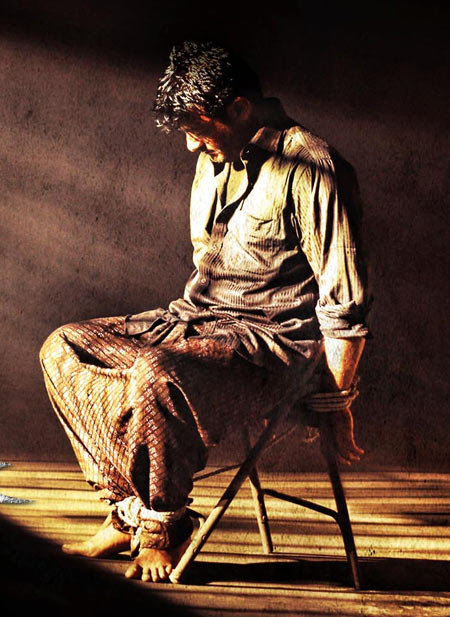 It took almost one year for the film to finally reach the theatres. Was it planned this way?

Yes, we started exactly a year ago. We were pretty much on target as far as the total number of days of shooting was concerned. The difference was just 10 per cent here and there. We finished in close to 100 days.

But post-production took us long. I feel pre- and post productions are very important aspects of film-making which get ignored in India. I feel we should budget and execute it properly.

After directing Kamal Haasan and Mohanlal, two of the most talented actors in India, in your first film, how was it directing somebody else?

Mr Ajith is extremely talented. Yes, he is completely different from them, but it has been a pleasant experience.

The trailer of the film is a huge hit on the Internet. Does that ease your tension and make you happy with what you have made?

Yes, both the trailers were received very well. When people respond to your product well, it definitely makes you happy. In a way, it eases your tension; at the same time, expectations scare you too.

'I don't know when I will direct another film' 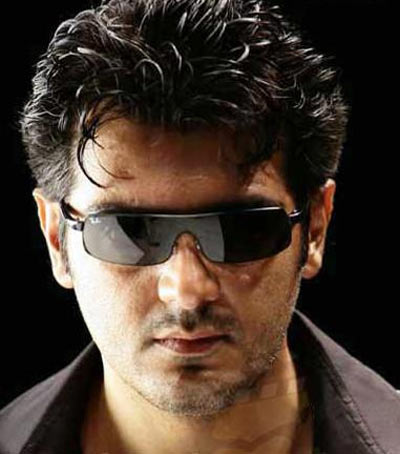 I think it helps to an extent. It gives you the perspective to look at film-making from an entrepreneur's point of view. Sometimes it could be beneficial, sometimes, it need not be so.

Who are you, an entrepreneur or a film-maker?

I went to a film school. So, at heart, I have always been a film-maker but career wise, I am an entrepreneur.

I have always been involved in the family business and I work with my brother in our business in the US. Now, I will go back to my family in the US.

I don't know when I will direct another film. Having said that, making Billa 2 was a fascinating and exciting experience.

Tags: US , Billa
More
Write a
Comment
Print this
article