Review: Attahasa is an edge-of-the-seat thriller 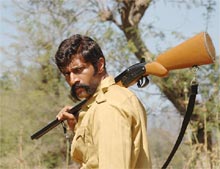 ‘Those who live by the gun shall die by it’ goes the saying, and this was particularly true in the case of the forest brigand Veerappan. Director A M R Ramesh, who made Cyanide and documented the killing of Rajiv Gandhi’s assassins with specific timelines, has done it again with Attahasa.

The film begins with Veerappan’s childhood and how he turns into a dreaded sandalwood smuggler and fought the establishment for many years. Director Ramesh has tried to reconstruct events as they occurred, in the same locations where the bandit operated. He has made a gripping film.

The film shows Veerappan’s many run-ins with the police. He kills a forest officer who tried to reform him, and two police officers Harikrishna and Shakeel Ahmed try their best to nab the outlaw but end up losing their lives. There’s a police officer who vows to get married only after killing Veerappan but ends up losing his life too. Another senior cop Gopal Hosur is saved in the nick of time.

The film recreates Veerappan’s vast network of informers and his knowledge of the forests in which he operated. In his long career Veerappan’s gang killed more than 2,000 elephants and at least 126 persons.

Although director Ramesh needs to be commended for the extraordinary effort in researching the life and activities of the forest brigand, he has left out many portions of the special task force’s operations.

It was a well known fact that Veerappan created more trouble for the people of Karnataka than Tamil Nadu, but Ramesh seems to think otherwise. He has just made a passing reference to the operations of the Special Task Force of Karnataka whose personnel made heroic efforts to nab him.

However, Ramesh has tried to reconstruct all the happenings that led to Veerappan’s death, and how Veerappan was finally done to death is interesting and gripping to watch.

The famous kidnap episode of actor Rajkumar is a major let-down. The director obviously does not want to create any controversy and so has not shown what went on behind the scenes to get Rajkumar released from Veerappan’s custody after 108 days.

Kishore has lived his role as Veerappan. He is simply superb as he wreaks havoc to great effect. Although Suresh Oberoi has tried his best to play the real life Rajkumar, he seems out of place and miscast.

Arjun Sarja and Ravi Kale are impressive. Bhavana Rao as the Lambani girl, Chandini, who is Gurunathan’s love interest, has nothing much to do and the same with Lakshmi Rai.

Many scenes that showed Muthulakshmi, Veerappan’s wife, are blurred. The reasons for this are not known. It may be because of her attempts to stall the release of the film that the director has blurred her presence on the screen as a compromise. Vijayalakshmi, who plays the role, doesn’t have much scope either.

Vijay Milton’s camerawork is the real hero of the movie. The pace of the movie is dictated by Milton’s exemplary work behind the camera. The aerial shots of the forest areas are superb. Sandeep Chowta’s background music is good.

A M R Ramesh has made another visually captivating film, notwithstanding the flaws. The movie makes for quite an engaging watch with timelines and specific instances. Veerappan’s final encounter is interesting, making it an edge-of-the-seat thriller.