Review: The Lorax is a delightful film 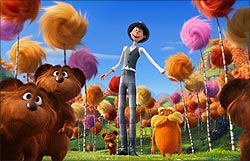 Preeti Arora feels The Lorx is surely going to bring a smile on the face of its audience.

In 2010, Illumination Entertainment gave us Despicable Me, a film that deserves a place on our DVD shelves alongside the likes of Toy Story and Lion King. Come 2012, we get Dr Seuss's The Lorax.

It's not hard to make sense of Illumination Entertainment's intended plan of action here. After coming out of nowhere and blowing everyone from Pixar to Dreamworks right out of the water, the next logical step from a business standpoint would be to take out the competition one by one.

The Lorax needs to be watched not just because it's a stride forward for one of the world's up and coming animation studios, but because it makes for a fun watch.

The protagonist of the story here is not Lorax, as the title suggests, but Ted, a 12-year- old with a penchant for adventure.

He resides in Thneedville, a futuristic city where the trees come with remote controls and fresh air is monopolised and sold as a commodity by a short, pudgy business magnate named Mr O'Hare.

Ted, being the daredevil he is, embarks on a quest to find a real tree in order to win the love of pretty, blonde-haired Audrey (yes, of course, there is a love angle to this).

And so it happens that he meets the Once-ler, a part Bohemian hippie, part entrepreneurial whiz, part blues guitarist and also the story's link to Lorax, the guardian spirit of nature who "speaks for the trees".

The script is overwrought with themes of environmental responsibility and the vileness of corporate machinery. Clearly, the film aims at pushing a clichéd political agenda.

But it does work, lending full credit to the filmmakers for preserving the essence of Dr Seuss's original story.

And while Dr Seuss loyalists might feel cheated by the film's extended narrative, which goes considerably beyond what was originally written in the book, the writers do a great job at integrating the add-ons, managing to make their point in a nifty 87 minutes.

The animation does complete justice to Seuss's rich illustrations, although the 3D component is negligible, as is the case with every second movie succumbing to the 3D trend these days.

The colours are bright, loud, and in accordance with Dr Seuss's twisted manner of drawing/ painting. The screenplay is quick, whimsical, and feels perfectly Seussian.

Despite being described as a 'musical', The Lorax doesn't offer much to the ear; 'part-musical' might be more fitting.

The tunes are a tad too kiddish, the lyrics are kind of obvious and the instrumentation gets annoyingly tacky. Your kids will fall in love with it, so buy them the CD.

That is a large part of what does not work about The Lorax. Unlike Cars or Kung Fu Panda or WALL-E, The Lorax possesses little to attract a more mature audience.

One might argue that Dr Seuss and Kung Fu Panda are in two separate leagues, but compare Lorax to Horton Hears a Who! once again to understand the point.

Still, The Lorax is a touching film. It won't make you cry, but it will make you smile.