News
Business
Movies
Sports
Cricket
Get Ahead
Money Tips
Shopping
Sign in  |  Create a Rediffmail account
Rediff.com  » Movies » Review: The Heat could be THE movie of the year!

Review: The Heat could be THE movie of the year! 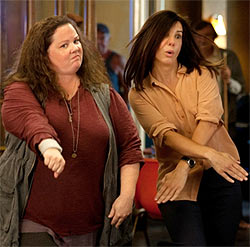 The Heat is a movie to watch out for, writes Paloma Sharma.

The buddy-cop genre is back!

From Tango and Cash to 21 Jump Street, this genre has been put through pretty much everything -- action, thrillers, comedy, you name it. Then what's so new about The Heat?

Director Peter Feig -- of Bridesmaids fame -- brings to us a story that did not, for once, make me hit my head on my desk repeatedly after examining the movie's gender dynamic.

The Heat stars Sandra Bullock as socially awkward FBI special agent Sarah Ashburn and Melissa McCarthy as Shannon Mullins, a Boston police officer who, though passionate about her job, can be a handful even for her own boss.

Sarah Ashburn is the perfect agent. She has enviable powers of deduction, an impeccable track record and has a way of getting into the criminal’s mind. Ashburn sniffs out drugs that even the toughest of police dogs can't find -- quite literally!

But her arrogance about her own prowess on the crime scene and her inability to read social signals leaves her without human company at work and outside of it.

Mullins, on the other hand, is the scariest cop in town. She doesn't give two hoots about the fine print of the law when it comes to protecting her neighbourhood. Law-breakers run at the sight of her. Her colleagues run at the sound of her, especially since she's got the choicest of curse words to brighten your day.

Even her Captain cannot make her toe the line. Safe to say, she's not exactly the friendliest of the bunch.

Neither woman has ever had a partner. Or even a friend. But due to a strange turn of events, the two of them find themselves teaming up, risking everything to bring down a ruthless drug lord, who terrorises the streets of Boston, before he claims any more victims.

At this point, I should probably state that I'm a Sandra Bullock fan. While it may seem a little biased not to draw comparisons between Sarah Ashburn and Margaret Tate (Bullock's character from The Proposal) it has been an absolute pleasure to watch the diversity she displays, going from Speed to The Lake House and now, The Heat.

While Melissa McCarthy may be relatively new to the big screen, she's a star in her own right. It’s going to take you a whole week to digest the fact that foul-mouthed, trigger-happy Shannon Mullins and adorable, clumsy Sookie St James (of The Gilmore Girls) are played by the same woman.

McCarthy is the perfect Mullins -- complete with the Queen Latifah-esque outfits (from Queen Latifah’s U.N.I.T.Y. days) down to the crazy chases she embarks on when taking criminals down.

Feig and scriptwriter Katie Dippold take the formula for a buddy-cop movie and rearrange it to give the genre a completely new dimension.

Dippold crafts her characters with the precision of a master. The leading ladies are not one dimensional pin-up girls who want love more than anything else and are waiting for their Prince Charming to come rescue them from their solitude.

It was refreshing to see a socially inept woman as a successful FBI agent instead of a quiet secretary moping around the office, hoping someone will see her and pull her out of her invisibility.

The most interesting part of it all was the portrayal of Shannon Mullins as a regular heart-breaker and not another big girl who is 'pretty on the inside' and just needs a man (or sometimes, a woman) to see how amazing she really is. Mullins' fearless acknowledgement of and control over her own sexuality almost had me doing a victory dance right there in the theatre.

Another character to look forward to is Captain Woods (Tom Wilson). He's a fresh break from the permanently angry, yelling-their-lungs-out bosses in uniform. Captain Woods is a 40-something, prematurely ageing helpless police chief who treads carefully around Mullins, lest he provoke her infamous ire.

Although the movie contains its fair share of expletives, the background score ensures you listen to more than just profanity-laden, albeit witty, dialogue. It features tracks from Angel Haze, Kreayshawn, Kimbra and Santigold that complement the story instead of telling it.

The Heat is not a shy film by any standards. It is out there and in your face, much like the two protagonists themselves. Full of gags, it is not afraid to address issues such as discrimination on the basis of race and gender -- all perfectly blended with the right kind of humour that pokes fun at the oppression, not the victims.

Despite brilliant writing and direction what really makes this film work is the chemistry that Bullock and McCarthy share. This is one on-screen pair I'd like to see more of. Hopefully, The Heat will spawn a sequel and then some more.

It may be too soon to say, but considering the releases up until now, The Heat could turn out to be the movie of this year. Created by a writer-director duo that has the courage to challenge popular stereotypes and armed with a cast that just won’t stop making you laugh, this film is all ready to get down and dirty in the box office arena.

Other releases better watch out because this one's really going to be bringing the heat on! IN PICS: The amazing story of the Badami cave temples