News
Business
Movies
Sports
Cricket
Get Ahead
Money Tips
Shopping
Sign in  |  Create a Rediffmail account
Rediff.com  » Movies » Review: Ishkq In Paris is as stupid as its spelling

Review: Ishkq In Paris is as stupid as its spelling 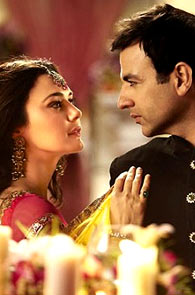 Ishkq In Paris is a bad film brought furthur down by a bunch of Bollywood cliches and a fading Preity Zinta, writes Raja Sen.

When we first met Preity Zinta, we were bowled over by those sparkling eyes, those dimples and that genuinely fresh candour. When, in Dil Se, Shah Rukh Khan choked on his burger as she casually asked about virginity, we could relate.

We rooted against the girl his character loved because of the character we invariably fell for, dooming the movie’s fate without realising it. And it felt worth it. What a girl, that fiesty, ebullient, Perk-eating Zinta.

That was fifteen years ago. In this Friday’s release -- the moronically spelt Ishkq In Paris -- Zinta assails us with those dimples in the hopes that things haven’t changed.

Tragically, she seems almost determined not to act. She straddles the line between French and Hindi clumsily, speaking in a bit of a supervillain accent.

Her eyes sparkle with the eagerness of a jumpy squirrel, even when they shouldn’t. (Really, should anybody’s?) There is a bit too much enthusiasm, too much bounce to her character, who shrugs all the time and nods rapidly and constantly, like a big Preity bobble-head.

Without a cricketer in embracing range, Zinta doesn’t seem to know what to do with herself.

This, as you should have guessed from the title or the posters or the heading of this review, is a bad film. Evidence can be found in the fact that the men in the film, having worked previously on truly dismal projects, decided to come to this one with names changed.

This Paris project, then, is like their witness protection program, their chance to carve new identities. Not the best pick, alas.

Somewhere in the middle of all this mediocrity is iconic French actress Isabelle Adjani, playing a Parisian playwright called Maria.

The film opens with her reading from a script she’s written, and just when we think that perhaps something interesting may unfold from this unquestionably talented leading lady, she switches from English to Hindi with a ghastly bit of dubbing -- I have a feeling Adjani’s irritating Hindi voice belongs to the woman who dubbed for Nargis Fakhri in Rockstar.

I might indeed be wrong, but no wronger than the filmmakers.

The story of Ishkq and Akash -- for that infuriatingly spelt Ishkq is the name of a character -- forms Maria’s latest play, and from what we hear of the play, it seems she had watched Jab We Met a few times and then felt Geet needed to be an imbecile.

Maria, while beautiful, is clearly a hack, for the love story she describes is so unbearably generic that the script could have been assembled by putting together the outtakes from any number of romantic movies. Young fellow meets Manic Punjabi Dream Woman (ahem) in Paris, they Before Sunrise it for a night, and then Salman Khan pops up for a song. Textbook, truly.

Ah, but even this hunk-less hunky-dory state can’t last forever. In a laughably bad heel turn, the hero goes from sap to scumbag in the space of one scene, going from cooing to cursing and berating the heroine’s family.

Which, it turns out, she and her mom don’t mind as much. Clearly these characters deserve one another.

“This is a rubbish love story,” Zinta says in the film’s most honest, self-aware moment. “I need a drink.”

Ditto, miss. And you best be buying. 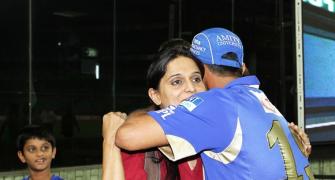 PIX: Bollywood gals with the MOST GORGEOUS hair 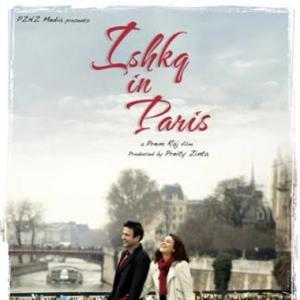