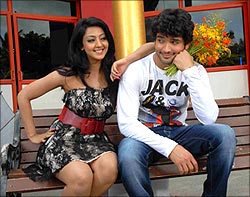 According to Shrikant Srinivasa Parijatha is a film for those who are in love.

Billed as a film for young couples in love, Kannada film Parijatha is releasing ahead of Valentine's Day to cash in on the rumoured romantic link between its stars Diganth and Aindrita.

Evidently, the two share a good on-screen chemistry so casting them together in the Kannada version of the Tamil romantic comedy Boss Engira Bhaskaran (with Arya and Nayantara) makes sense.

Bhaskar (Diganth) is a good-for-nothing fellow who has to sit endlessly for supplementary exams in order to complete his degree. He has his own recipe for enjoying life--marry a working woman who will feed him all his life.

He lives with his mother, elder brother and sister, and is called Boss by everyone at home. He spends most of his time in his friend Sundar's hair-cutting salon and blows away much of Sundar's money on booze.

He meets Chandrika on a bus and falls in love with her and she takes a secret liking to him. He wants to marry her, but when he approaches her

family with his proposal, they make fun of his jobless existence. This angers him and forces him to start a tutorial for Class X students after taking a loan from a local money lender.

Bhaskar makes a good profit from his tutorials, but Chandrika's father, who is a bank manager, still disapproves of the match.

Full marks to Diganth for living his role. The role is tailor-made for him. Although Aindrita Ray cannot probably match Nayanthara's charm, she complements him with a good performance.

Sharan as the barber-friend is hilarious as always. Mukhyamantri Chandru makes a comeback after a long gap. Raghu Mukherjee makes a friendly appearance in the movie as the prospective bridegroom.

Mano Murthy's music is melodious but doesn't linger in one's memory. The title song and the hot number Mohisu.. are good.
Srinivas's cinematography is pleasing; a major portion of the film was shot in Mysore. Director Prabhu Srinivas has remained faithful to the Tamil original.

This is a film for those who are in love. Go for it and enjoy. 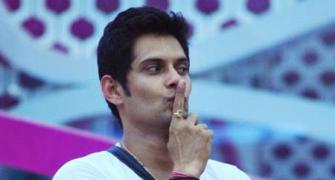 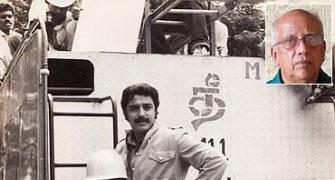 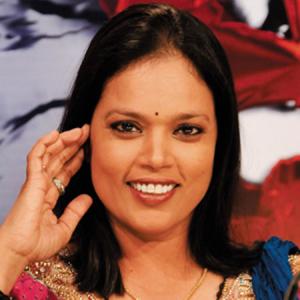 She makes Rajinikanth and Prabhu Deva dance to her tunes 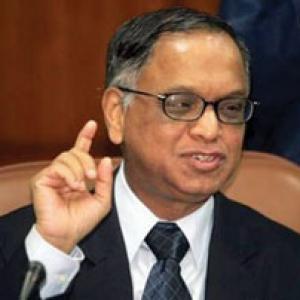 No need to worry over fall in rupee: Murthy