'Stardom, fans and all... How can you say that now? You have to have a body of work.' 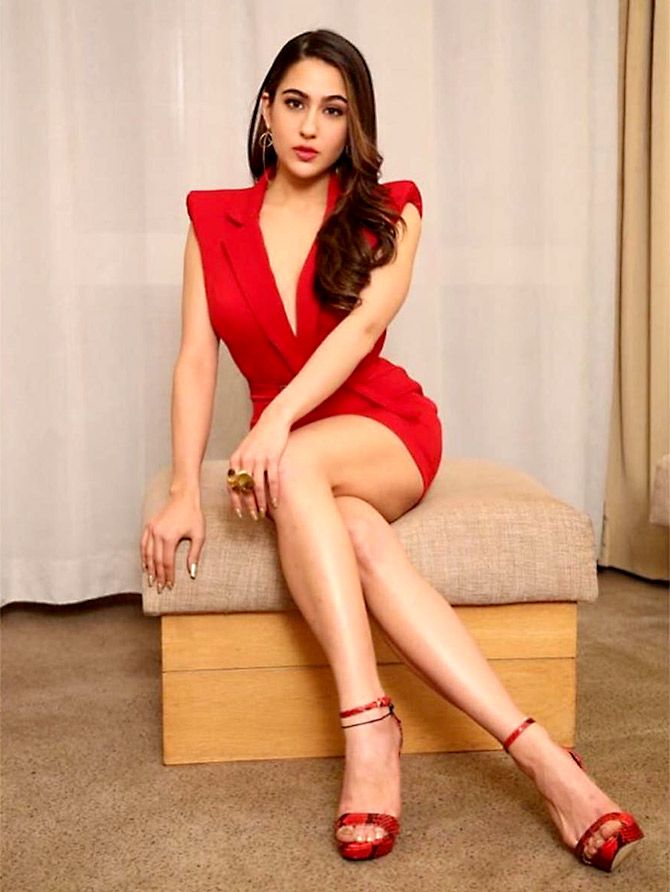 She has had two releases in a span of 25 days. Both are running simultaneously in the theatres and both are doing well at the box office.

She got rave reviews in Abhishek Kapoor's Kedarnath and showed that she could do well as a commercial actress in Rohit Shetty's Simmba.

Saif Ali Khan and Amrita Singh's daughter is as confident as they come and she's ready to take on Bollywood.

She's basking in the love of her fans and wants to make sure that she earns every minute of her stardom.

"You watch Koffee With Karan and want to like this new girl. You have bought that ticket and popcorn, wanting to like her. I am going to work doubly hard so that the ‘sweet girl’ can be appreciated a 100 percent," she tells Patcy N/ Rediff.com.

You got a lot of appreciation for Kedarnath. Does that boost your confidence?

A lot of people think the first chapter is over but I don’t think like that. The only thing that has happened is that you have given me a book and I can read.

Honestly, I needed to see myself on the big screen.

I understand that my parents, the industry, the media and the audiences matter a lot but, at the risk of sounding arrogant, I want to say that if you are not convinced, you will not be able to convince anybody else.

So I needed to watch the film.

Now, seeing the appreciation -- I don’t know if confidence is the word -- I feel I have a duty.

If you give somebody love in any form, it comes with a certain duty. 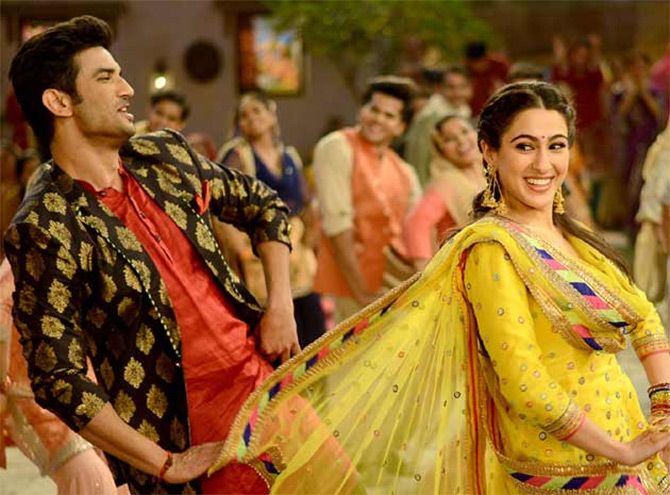 Did you celebrate your success?

My celebrations are interviews. I am not being funny, it’s true!

It has been so hectic for the past three weeks, working on Simmba, that the only time one gets to internalise what has happened is during interviews.

There is nothing more beautiful than celebrating with people who make you what you are.

I think I am what I am because of the media and the audiences.

I went incognito to watch the film in theatres. That was a celebration!

What was the best compliment you’ve got?

I sound like a sadist but you can understand where I am coming from -- when people were crying in the climax (of Kedarnath), I was like, ‘‘Yes, rote raho, thoda aur ro lo.’

My mother also cried at the end of the film. 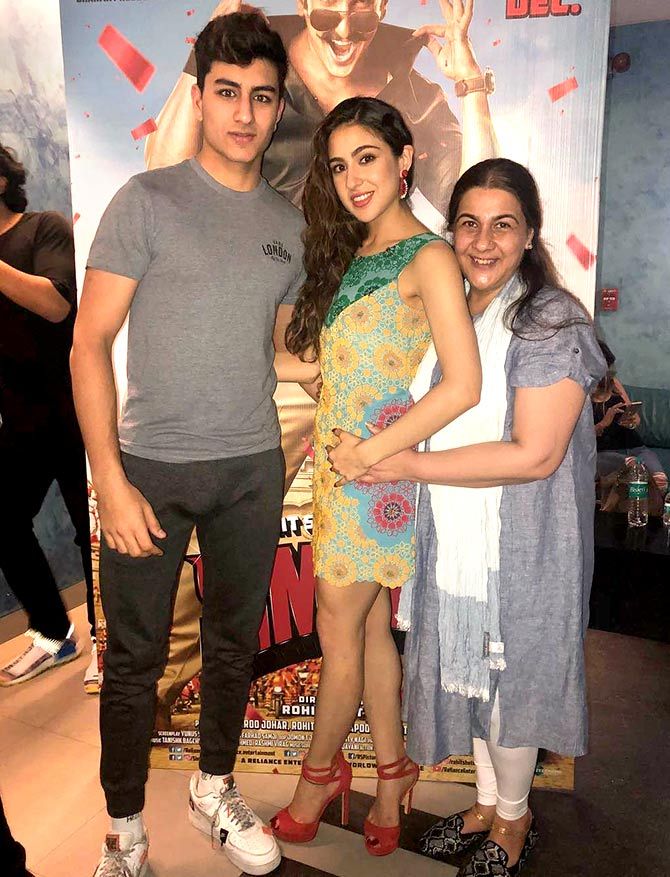 Do people tell you that you resemble your mother? Your acting style is like hers as well.

I don’t know about acting because she’s a fine actor and I think it will take me a long time to get there.

Yes. I think that she is also extremely proud of me.

She’s getting a lot of messages from people.

She messaged my mom, which was a big thing for me. I think Dadi messaging mom after whatever life we had was really something. 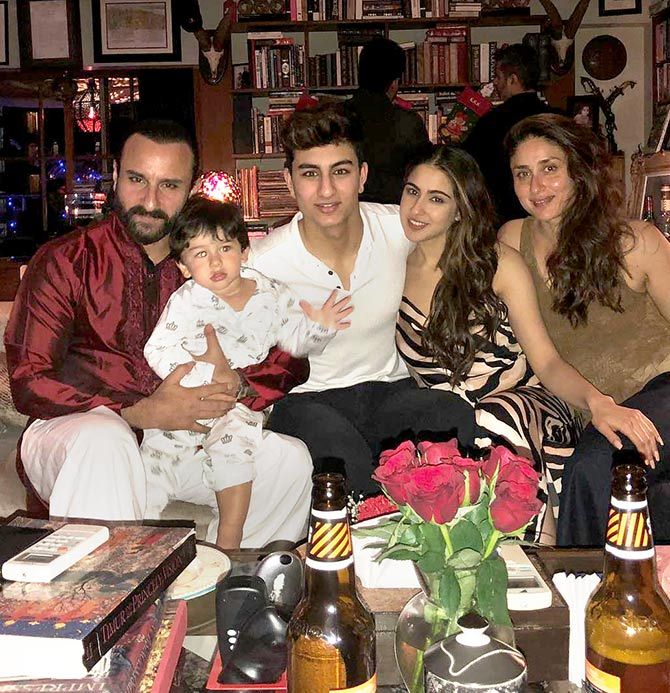 Your father Saif Ali Khan said that your debut was way better than his.

I don’t know. What my father needs to do is chat with me before he chats with others; that would be a great plan!

But I will be honest. This is not the actor talking, this is the father talking.

Why is anyone asking him which debut is better, what will he say? I am his daughter, na!

Your father did not want you to become an actress?

That was a joke.

I will tell you what he means.

He wanted me to get an education.

The way we think is, padh rahi hai toh heroine nahi banegi. Aise thodi hota hai, dono bhi kar saktey hai na? Karenge, kar liya! (laughs) (If she’s studying, she will not become a heroine. But one can do both together. In fact, I’ve done it!)

My father was very particular that I have education.

That threw off people, even from the industry. Why is she studying when she wants to become an actress?

He would say both are not related and I agree.

He told me that I need to strike a balance, as the highs are very high and the lows are very low. 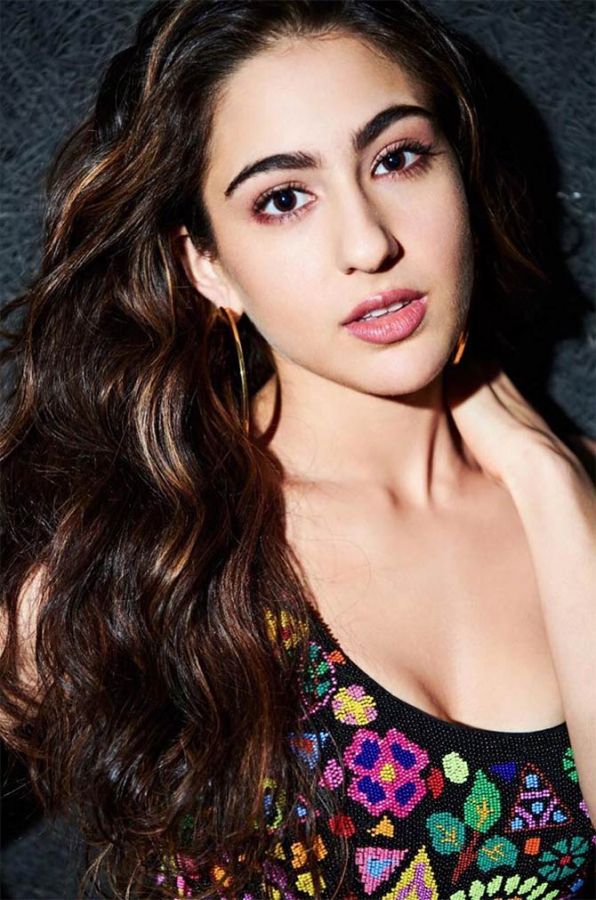 You were a star kid before and now, two films later, you have become a star. Do you feel the pressure?

No. I think it’s a give-and-take. It has made me very aware that I need to do more work, and better work.

I need to work harder.

I have worked very hard and tried my level best. I deserve 80 percent of the praise; 20 percent is the combination of good karma and the fact that people are genuinely liking me.

You watch Koffee With Karan and want to like this new girl. You have bought that ticket and popcorn, wanting to like her.

I am going to work doubly hard so that the ‘sweet girl’ can be appreciated a 100 percent.

How was the transition from Kedarnath to Simmba?

When you are yelling and emoting in a film, you are not doing it; your character is.

Your team is there to help you.

My team is excellent.

Gattu sir (Abhishek Kapoor, Kedarnath director) would not take his eyes off me.

Sushant (Singh Rajput) and Ranveer (Singh) were also helping me play my character. 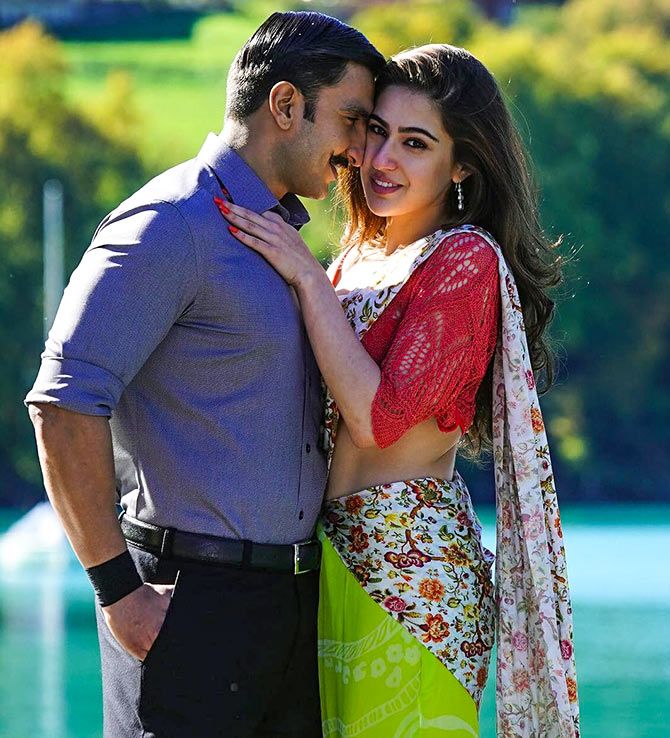 Rohit Shetty said you approached him for Simmba. Why did you want to work with him?

I messaged him thrice, and he replied the third time.

I am huge fan of Rohit sir and I aspire for versatility.

Rohit sir is the king of commercial cinema. Knowing that he was doing a film with Ranveer Singh, why would you not want to do a film with them?

Rohit called you the next superstar…

He is being very nice.

Kedarnath has established that there is potential in this girl.

Stardom, fans and all... How can you say that now?

You have to have a body of work.

That’s why I love interviews because then they (the hairdressers) touch up my hair!

That’s when I realise this is important in the scheme of things because otherwise, nothing has changed.

I still wake up in the mornings and go to the gym, have my food and then go to work. That’s it.

I don’t think about stardom.

I went for a walk in the beach this morning. I don’t think it’s a big deal, it’s normal. 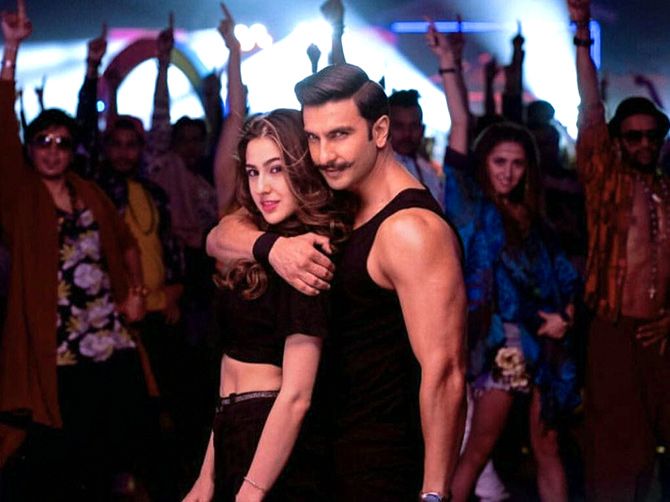 Tell us about your experience of shooting the Aankh marey song.

I had a blast!

Ranveer told me, ‘The safest and easiest way to ensure that people have fun in the song is that you have fun while shooting it.’

How I matched up to his energy, I really don’t know!

I don’t think I matched up to Ranveer Singh but I think I tried to stand my own to the best of my ability. That had a lot to do with Ganesh sir (Acharya, choreographer).

I am a huge Neha Kakkar fan.

I listen to her songs from the Pyaar te jaguar times.

When I go to YouTube and type Aankh marey or Seethi bajaye, the face is mine! That’s shocking to me.

I can keep watching it again and again.

Which directors do you want to work with?

I would love to work with Anurag Kashyap. I enjoyed Manmarziyaan and Dev D. 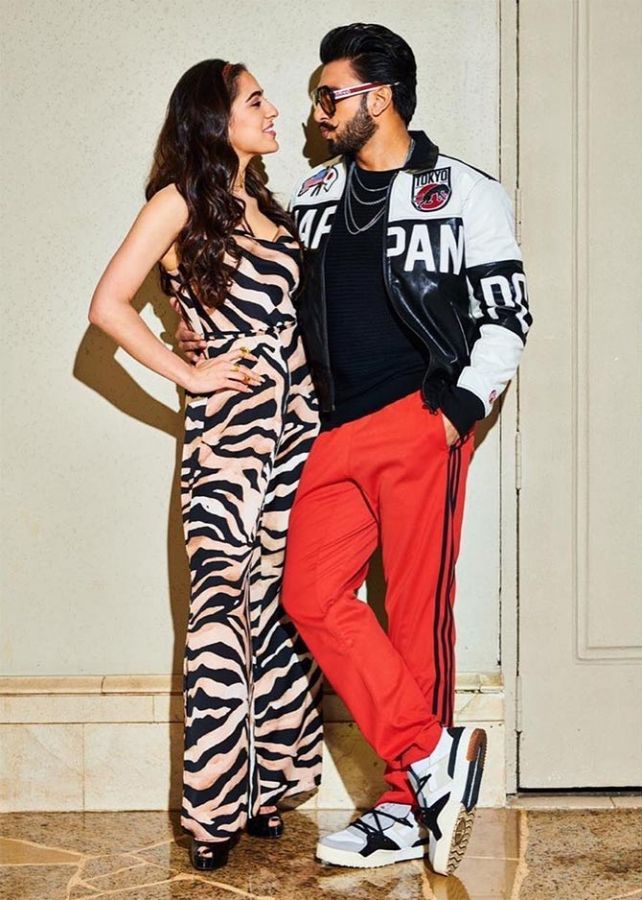 Do you find the digital platform interesting? Will we see you in a Web Series?

I am open to working in any platform that allows to me to act and if they come up with interesting stuff.

My father has done a tremendously good job in it.

It’s commendable. Since he wasn’t doing the best at the box office, a lot of people would turn around and say, ‘Aarey, yeh toh TV par hai.’  But he did not think like that. He’s equally bright. 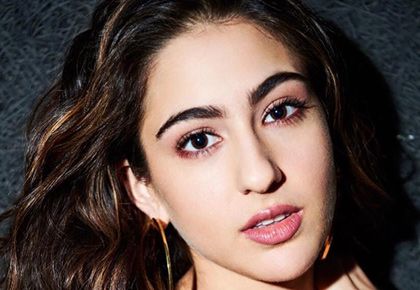 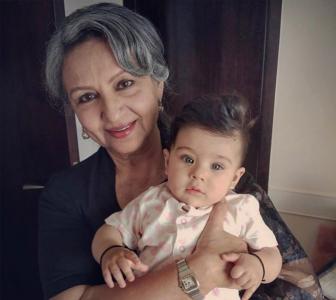 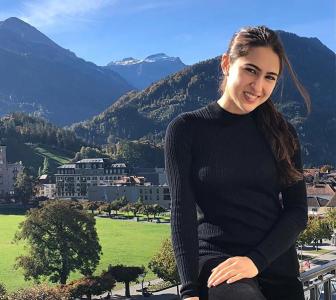 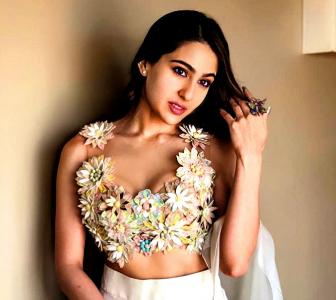 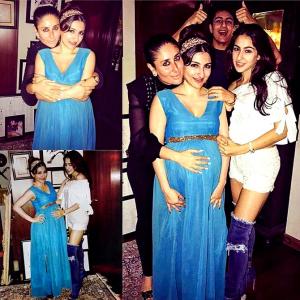 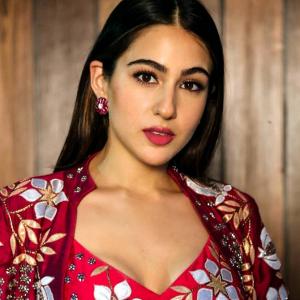