'We aren't encouraging people to kill their husbands'

'There are a lot of women out there in abusive marriages.' 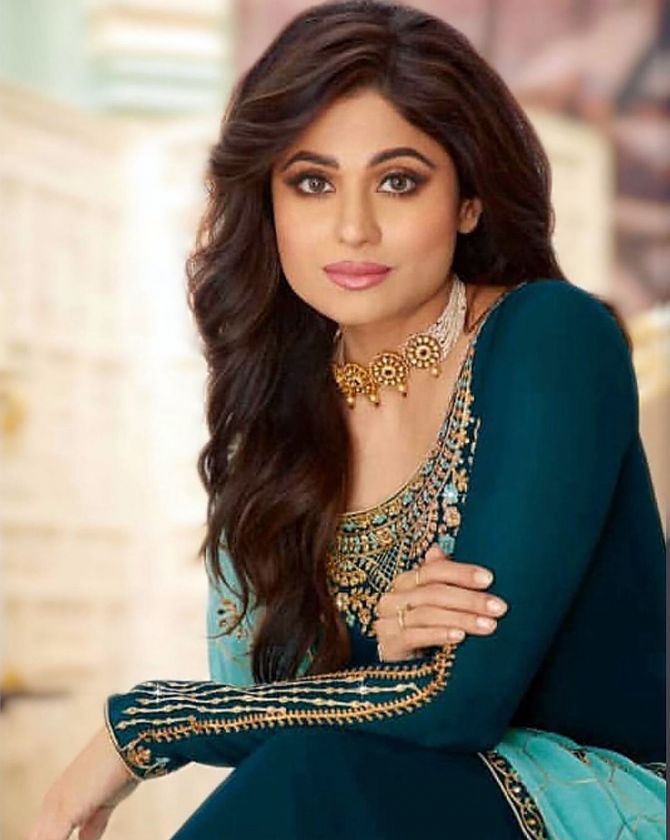 Shamita is thrilled with the response the show is getting, and tells Rediff.com Contributor Sameena Razzaq: "I was sitting at home and very bored because of the lockdown. I was so happy to just get out and work."

I don't think these checkmate moments should be revealed.

I had quite a few checkmate moments in past relationships, but I don't want to reveal them.

I am single now. You had described your character Kavita as an innocent, impulsive and childish woman. How can she turn into a killer?

She shares a very deep friendship with these other two characters and her personality is such that she is not somebody who can make a decision on her own.

She always looks for somebody's advice.

In her life, Jayati's character (played by Swastika Mukherjee) is like a mother figure.

It is not something she would come up with, but she is someone who is probably going with the flow.

She has gone through a certain amount of turmoil in her marriage and there's a lot of pain in her life.

She wants a better life.

Killing her spouse was the last resort but it is something they went ahead with because it was between choosing their life or their husbands' lives, and they chose theirs.

Is killing the husband the only way to escape an abusive marriage?

Absolutely not. That is obviously an extreme step these characters have taken, but this is a series, there is a certain amount of liberty there.

Symbolically, it's about these three women taking power back into their lives and having the courage to stand up for themselves.

There are a lot of women out there in abusive marriages.

They are not able to get out for several reasons, whether it is family, children or whatever.

These women put other things before their own happiness and that makes it difficult for them. IMAGE: A scene from Black Widows.

Don't you think the series might influence women in a wrong way?

In that case, we shouldn't watch so many movies because so many of them take the liberty of crossing the line.

We are not encouraging people to kill their husbands, there is so much else to take from this series.

What is the take away for victims of domestic abuse from Black Widows?

There are a lot of people out there who don't even talk about it.

So what I would tell them to at least speak up.

Just talk about it because that will give you the courage to do something that is right for you.

You need to seek help. We don't see you say yes to just about anything. What attracted you to a bold concept like Black Widows?

Well, I am definitely an introvert, but when it comes to my work and when the camera is on, you see a very different me.

I don't know what gets into me.

As far as Black Widows is concerned, I think the first thing that really stood out for me was the story.

I loved the script.

Yes, I have to admit my character is not something that made me jump in excitement at first because there is so much that I could not relate to, in terms of her personality.

When an actor cannot relate to a character they're portraying, it becomes very difficult.

So I kept questioning myself and wondering whether I should get into this.

Is this really my cup of tea?

But as I kept reading the story, I realised that I have reached a stage where from wanting to slap this character and strangle her, I started feeling bad for her.

I eventually started to love this character.

I think I have always portrayed characters with strong personalities. But this one, I had to actually sit with the director.

We made up a back story for why she was the way she was, what may have happened in her life that made her to feel so insecure...

Apart from that, I felt this was a combination of really good actors coming together, whether it's Sharad Kelkar, Mona Singh, Swastika Mukherjee, Parambrata Chatterjee... I wanted to be a part of something like that.

Besides, I was sitting at home and very bored because of the lockdown. I think this provided me respite.

I was so happy to just get out and work.

So there are so many reasons why I took this on. 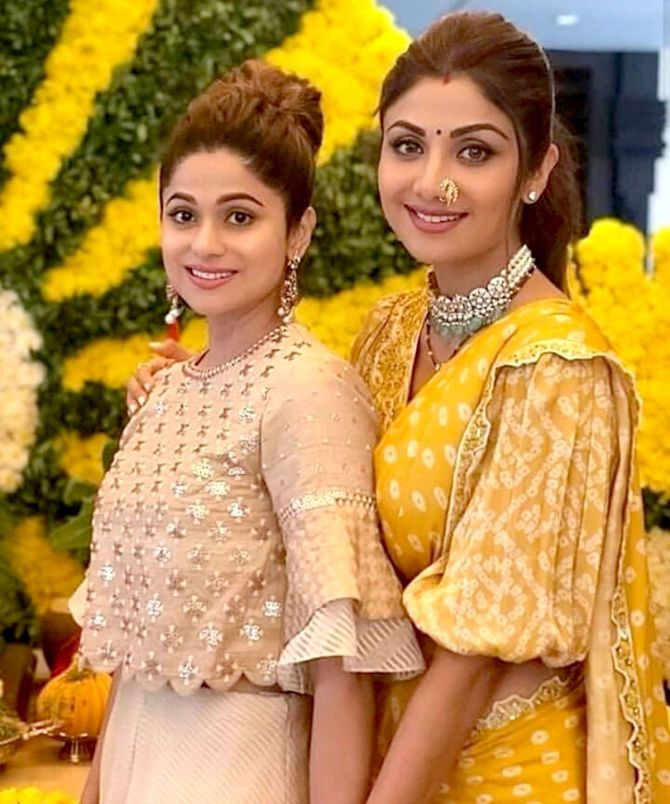 Did your sister Shilpa Shetty motivate you to take up Black Widows in any way?

We don't interfere in each other's work.

Having said that, I remember this offer came to me so fast and everything sort of fell in place so fast...

They were literally like, this is happening and we want to start this next month, can we see an audition for this character?

I spent a lot of time in my sister's house during the lockdown because I live alone.

So my sister recorded my audition -- she was the cameraman, the director, everything.

I got the role and left for Kolkata within a month.

So in that sense, she was involved in the first part of me getting this role. Other than that, she knows the basic outline of my character.

We do discuss what we are doing, especially during the lockdown when we were doing nothing else.

We spent so much time with each other. We talked about everything that is happening in our lives.

She is always happy with any work I do.

She is always saying I should do more work, which is true.

Actually, I just wish more people offered me something nice. Do you regret saying 'no' so much that eventually, work stopped coming to you?

At the end of the day, I said no because I didn't like what came my way.

Yes, I do wish that I had done more work.

I do wish that something better had come my way.

I was saying 'no' so much that people probably thought isko kaam hi nahi karna hai, that may have happened.

At the end of the day, luck plays a big role.

I believe that may be then was not my time, maybe my time is now.

I can't have so many regrets in life.

I am happy with whatever I am doing today and whatever I have done in my past.

It has made me who I am today.

I have a roof over my head, food on my plate, so nothing to really complain about. I am grateful for that.

But yes, the OTT platform is giving actors like me a chance to do more.

There is so much work happening.

You have talked about your battles with depression. How did you tide over it?

I fought successfully because I wanted to help myself.

The first step is always to become aware that there is a problem.

You have to want to help yourself otherwise it will not work.

Some people get so comfortable in that darkness that they get scared to take step out of it.

For me, luckily, I have a supportive family.

I went through therapy.

I have a very strong spiritual background and that gave me a lot of strength.

You need to understand life and its meaning because a lot of questions come up. You are among the fittest actresses around. Was Shilpa your inspiration?

It's the other way around.

I was the one who used to work out more.

I got into fitness over 20 years back. Then, I don't think Shilpa was into yoga.

I was introduced to health and fitness through my first film Mohabbatein.

I had to put on five kilos for the film, and we were all given trainers. I remember I had Leena Mogre.

She would tell me what to eat.

She would come shopping with me.

Before that, I was this kid who would go through phases of binging and starvation diets. I didn't know anything about health and fitness.

Once I started weight training, it became an addiction for me.

Do you feel choosing a multi-starrer like Mohabbatein over Lagaan was a mistake?

I don't regret a single moment of being a part of Mohabbatein.

I am here because of that film.

I made some wonderful friends.

I had the opportunity to work with wonderful people. I got to interact with Yashji (Chopra), Amitji (Amitabh Bachchan), Shah Rukh Khan, Aishwarya Rai. I have absolutely no regrets. 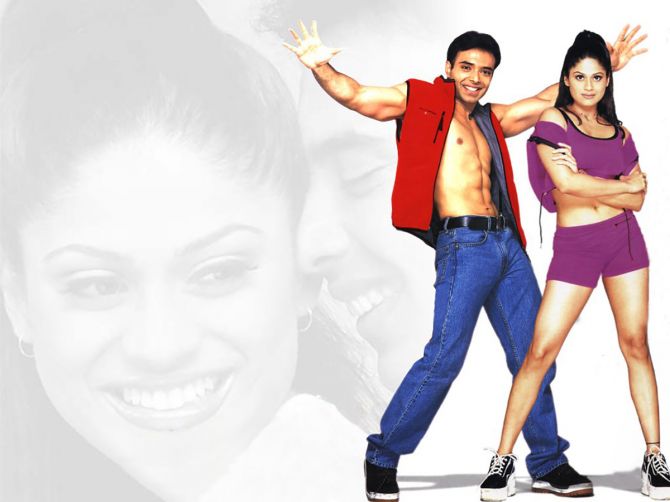 You have completed 20 years in the industry, and been through your share of ups and downs. Is there anything you want to do differently?

No. But I wish I had the opportunity to do more work.

I did work that I was convinced of.

Some worked, some did not.

Whatever work I did, I did with 100 per cent conviction, so I have no regrets.

It has helped me grow as a human being.

I have some wonderful memories.

I don't know where these 20 years have gone. 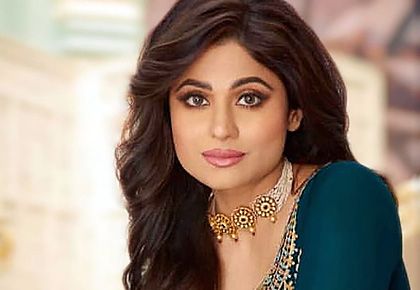 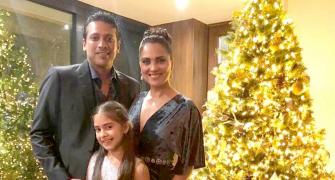 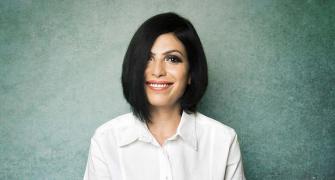 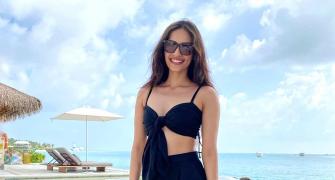 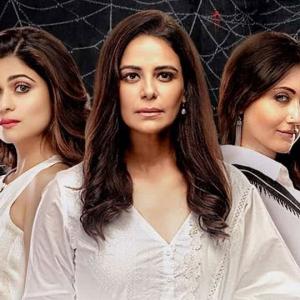 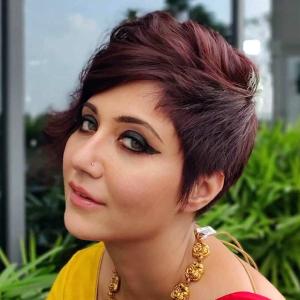