Review: Manjunath is a brave film 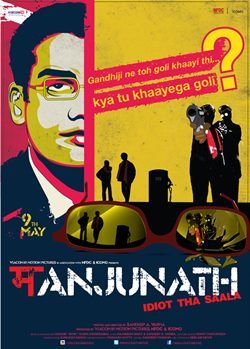 Manjunath is a lesson in humanity we all need at the moment, says Paloma Sharma.

Sometimes, the idea is better than its execution.

The story of Manjunath Shanmugam -- an Indian Oil employee who was brutally murdered for standing up to the oil mafia in Lakhimpur Kheri, Uttar Pradesh -- is one that must be told over and over again until this country is free of corruption.

And while Sandeep Varma-helmed Manjunath may be an important film in narrating his life story, it is not necessarily a very good one.

Manjunath brings to light his trials as he fought to expose the corruption in the oil business.

Despite getting off to a vague start, Manjunath plays an interesting game with the audience's mind -- much like in Hamlet, it is up to the viewer to figure out whether Manjunath is schizophrenic or whether someone is actually following and harassing him for cracking down on corrupt forces.

However, since you've probably already read about the case, you know what the truth is and how things will end for him. The fact that it is based on a real story sometimes works against Manjunath.

Varma's celluloid Manjunath is a mysterious figure with nothing that can account for a back story and only a hazy future. This extends to the rest of his characters as well. They exist only in the now.

We are not told about Manjunath's childhood or what made him who he was -- how he became sensitive and developed a sense of what is right and just -- and instead, he is left to derive his inner strength from a few cheesy scenes where he reads under the candle light, Shrimad Bhagwad Gita in hand.

Several scenes even take place from beyond the grave and this turn of events ruins the fast-paced, crisply edited aspect of the film and hence, the early promise it showed.

That said though, Manjunath is a brave film, like the man it is based on, as it openly takes on the issue of caste and class -- an everyday discrimination that the protagonist faced.

The film also doesn't shy away from speaking of the hypocrisy of candlelight vigils, dharnas and all the other steps that are taken only after there is a body and not before, when a potential victim is desperately crying out for help.

Manjunath must choose what it wants to focus on -- Manjunath Shanmugam's life or the aftermath of his unrelenting honesty. In attempting to tell the story of both, the film ends up looking shabby and confusing.

The film also dwells a little too much on the grieving parents and too little on the road to redemption. Divya Dutta's track in the film comes in too late and seems a little forced.

While Manjunath isn't exactly a cinematic pleasure, you must drag yourself and your family to the nearest cinema hall to watch this film.

You might find it a little boring, perhaps even insipid in the beginning and frustrating around the interval but you will be rewarded in the end.

It would be foolish to miss this film in a country where the 'chalta hai' attitude remains enshrined in our work ethic and where profit must be made at the expense of everyone else because everyone has a family to look after.

It was in these circumstances that Manjunath chose to be different, while completely aware of the consequences of his courage, and stood up for what he believed in.

This film is more about experiencing hope than it is about paying attention to the technical aspects and the unfortunate socio-political climate that prevails around us makes it a must-watch.

Manjunath is a lesson in humanity we all need at the moment.