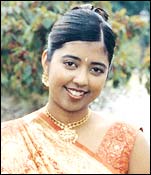 Following the terrorist attacks in New York on September 11, 2001, Rehana Mirza and her sister Rohi launched a theatrical company, Desipina, and produced the play Barriers. It revolved around a pan-Asian family dealing with the loss as well as the backlash and prejudice that South Asians faced following the 9/11 tragedy.

Rehana is the writer and director of the film, Fillum Star: The Peter Patel Story (now available on DVD), while Rohi has produced it. The film revolves around Peter Patel (Rizwan Manji), who plays a struggling actor. Suddenly, he gets that big break and becomes the subject of a documentary. He is followed by documentary filmmakers for 48 hours before his film releases in theatres nationwide. The film also explores how the Indian community reacts to his sudden fame.

Rehana received a BFA in Dramatic Writing from New York University's Tisch School of the Arts. She talks to Arthur J Pais about life and films.

Don't you think there have been too many films on desi life in America in the last four years?

I don't think there is a limit [for such films]. Besides, Fillum Star: The Peter Patel Story is different from the films made in the US and Canada.

And why is that?

Many of those films, like American Desi, dealt with identity issues. Some of us are moving beyond that. We are making films now, for example, about the struggle [for meaning] in our communities and in the world at large.

Why is your film called a mockumentary?

It is a fictionalised documentary style film. It does not have a traditional narrative style. It dances on the border between reality and fiction.

Your film has gone directly into video and DVD. Often, this is a sign of a film that could not find a theatrical distributor and so is dumped into video stores.

It was clear to my team and me right from the start that this film was going to be a DVD feature because it is gritty and is made in a guerilla style. It will be appreciated more on DVD. But it has gone to several film festivals and has been received well.

Your company is called Desipina. What does that word mean?

Day-see-pee-nah is a slang word that describes a person of South Asian (desi) and Filipino (pina) descent. It is a group that embraces multiracial identities and fusion lifestyles. The verb meaning would be to check outside the box by being adventurous and non-conventional.

You grew up in a multi-cultural home, with a Filipino mother and a Pakistani father.

Growing up in a multi-cultural home was fun and educational. I was infused with a unique cultural perspective that helped me relate culturally to many different worlds. When people asked me 'where I was from', the answer was always [and still is] complicated. People always got more than what they bargained for.

It was funny to watch people's faces grow confused when they didn't get the answer of 'Indian', which is undoubtedly what they were expecting. Even after telling people my cultural background, they would wait a beat and then continue on with some fact about India that made them start the conversation in the first place.

Growing up New Jersey, no matter what cultural hybrid you are, you still are just plain 'different'. I got used to it quickly.

Your sister Rohi married Gitesh Pandya [of boxofficeguru.com] a few months ago. So the extended family includes an Indian who happens to be a Hindu.

[chuckles] But he isn't the first one [in the extended family]! Last year, my brother Ameer married a Gujarati Hindu. And Gitesh keeps wondering where I am headed!

So what do you tell him?

You never know, I say. I will surprise you all. But now, I have no plans for a wedding.

What was a typical Thanksgiving Dinner like when you grew up?

Curry turkey. Oh, lots of it. I remember having Thanksgiving with my cousins and extended family, and we'd have Turkey and mashed potatoes, chicken curry, Basmati rice and yogurt. Ras malai or kheer for dessert.

Didn't your parents want you go to a medical or business school?

They still want me to go to medical or business school!

Did you have to work hard at convincing them about your choice of profession?

My parents always told me what they want most is for me to find happiness.

Did they know where you headed?

How did you bring about the subject of going to study writing and movies?

When I told my father that I wanted to write, he thought of it more of a hobby. So my attending Tisch School of the Arts was not what they wanted for me. Rohi was key in negotiating my enrollment at NYU. She was about to start business school and supported me 100 per cent.

My parents were initially worried and afraid for me. So I couldn't show any fear whatsoever. I still can't. They've gradually realised that I am making a difference through my writing, and that it's truly what I'm passionate about. Now, they are excited about my projects because I'm excited about them.

What have been some of the most rewarding experiences in building Desipina?

The responses from audiences who thank us for putting up work that challenges and defines. Talking to people who either drove from other states to see our shows or flew in from Canada to see Barriers when it was staged in San
Francisco a few months ago. Working with talented actors, directors and writers and seeing them move on and build upon the foundation they have in order to achieve success in a larger mainstream community.

What other film projects are you working on?

Signs Of Love, a screenplay I wrote, was purchased by Pundit Films, Inc. It will be directed by Kiran Merchant. Paresh Rawal is one of the leads, Kiran Deohans is the cinematographer and Leslie Lewis is the music composer.

The script deals with two best friends, Jonathon and Neil, who are searching for their soul mates in NYC's crazy singles scene, using horoscopes to guide their way. The film is scheduled to begin shooting this Fall. I recently wrote and directed a short film, Modern Day Arranged Marriage, which will be touring the festival circuit. I have also recently been hired by a Hong Kong company to write an International romantic comedy involving Indian and Chinese characters.

Many desi actors like Aasif Mandvi and Anjali Bhimani have played non-desi roles in Broadway productions as Oklahoma! and Metamorphoses. What are your thoughts on colour-blind casting?

Colour-blind casting is great. If the race is not specified, then the role should go to the best actor suited for the part, regardless of race.

Would you have a non-Asian play an Asian role in your shows and films?

I would have a non-Asian play the role only if I felt like that actor best portrayed the character and that the role could be easily changed to justify a non-Asian playing the role. In Signs Of Love, Neil is South Asian but nothing about him is particularly South Asian. So I could cast any race.

But when it comes to deeply etched an Asian character...

I wouldn't have a non-Asian put on makeup to play 'Asian'. Right now, though, I promote casting South Asians in roles because there is a fear of seeing brown faces onscreen in a light that is not exotic or vilified in some way. But I also encourage casting for diversity. In our upcoming production, 7/11 (which has 11 sketches, each seven minutes
long), we have an ensemble cast who play a variety of roles. So we have South Asians playing non-South Asian roles and we have non South Asians playing roles that are a first for South Asian characters. Thinking outside "the box" will help in creating more diversity in our films and media.