The art and craft of Nitin Desai

Straight from the art. That is how Nitin Chandrakant Desai's work can be best described.

He has been active independently for over a decade. But it was after 1942 -- A Love Story in 1994 that his name became synonymous with everything you ever wanted in art direction: grandeur, innovation, authenticity and excellence.

Desai is behind the appeal and look of films as diverse as Pyaar To Hona Hi Tha, Hum Dil De Chuke Sanam, Josh, Mission Kashmir, Lagaan, The Legend Of Bhagat Singh and Devdas, among many others.

Simple, unassuming, prone to speaking in halting English and Hindi with a strong Marathi accent, his elective subject at the prestigious J J School of Art in Mumbai was photography. Today, he has crafted a career in building appealing sets.

Contemporary and period havelis, kothas, aeroplanes, real and fictitious townships and villages, lakes, forts, palaces, multi-level department stores, railway stations -- you name it, he builds it with passion. Awards and honors have come to him with clockwork regularity. A hat-trick of National and Screen Awards crown a list that includes 15 trophies for his film and  television work. He has just won the Screen-Videocon Award for Art Direction in Devdas.

He has now made the first-ever big budget devotional film in India, Desh Devi Maa Ashapura. Forthcoming assignments include international projects like Marigold, Partition, Buddha and Invaders as well as big films like Ketan Mehta's The Rising, Vidhu Vinod Chopra's Munnabhai MBBS and several others. Excerpts from an interview with Dr Rajiv Vijayakar:

How do you approach an assignment?

During the narration, I mentally break down the film into frames and evaluate the filmmaker's expectations, the subject's scope and scale of production. From all these factors, I make a color palette of the film. Some films need computers and special software known as Autocad or 3-D Walk-Through, with the help of which I make detailed drawings.

As an art director, I have always believed in making the audience fell less like a spectator and more like a participant. Every film has a body and a soul. The movement of color has to be choreographed keeping in mind first the prominent characters and then the ambience around them.

How did you get into this field after learning photography?

I did some photographs for well-known art director Nitish Roy. I entered Mumbai's Film City Studios o May 9, 1983, and was never the same again. It was a sudden and magical transformation from the 2-D format of still photography to a
3-D world.

I realised I had found my niche and wanted to do art direction all my life. Nitishji took me on as fourth assistant for the serial Tamas. I also worked on Kabir for five-and-a-half years and on Chanakya for the first 25 episodes. I took over independently from the 26th episode.

Despite the volume of your work, you are quite choosy, right?

I see how much the producer wants me. For some films I supervise the complete look. That is when I call myself the production designer, not art director.

As production designer, I am involved right from the scripting and pre-production. Even the cinematographer and costume designer work in tandem with me, not exclusively as separate departments. Every prop, curtain, dress, even elements of the backdrop are modified to fit the look that the director and I have visualised.

In Hum Dil De Chuke Sanam, even the colours of the buses and an important building in Budapest, where we shot, were changed to get the right look and the mood of the sequences to be shot there.

These are the perils of being successful and high profile. The Devdas set was never gutted as widely reported. The fire happened in a nearby godown where set property and material were kept. The fan that killed a worker belonged to the Special Effects department and not to me.

The terrible death on the sets of Waah!... Tera Kya Kehna was because I had designed the water tank and had also suggested the quality of material that should be used to make it. But the producer compromised on safety by opting for cheaper material. Since Nitin Chandrakant Desai is a big name, I got all the flak.

What do you do to ensure safety?

I have been using the latest technology for putting up sets for the last six-and-a-half years; the scaffolding kind of sets that are used abroad. I mix creativity with safety, and there is minimum wastage, as this saves costs and the material is reusable.

Do you feel proud of being chosen for international projects?

I am happy and proud that I can become the means of spreading knowledge and awareness of our rich heritage and culture to the world. I have done nine projects so far, beginning with Jungle Book. So far, our country's image has been associated with squalor and poverty.

But now, thanks to Hum Dil De Chuke Sanam and Devdas, the world is looking at the grandeur and colourful nature of our country and its people. Pure Indian colors are now being liked in Europe. A French production company called me up to find out where the location in Hum Dil De Chuke Sanam was. I had to tell them the whole thing was a set built at Film City!

What made you turn to production with a devotional subject?

About two years ago, my father had emergency surgery and was quite critical. Doctors were not sure about his survival. I was in Bhuj, Gujarat, when my family called me. 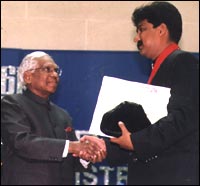 Suddenly, I found all my avenues blocked. No flights were available. Then a local person told me to visit the nearby shrine of Desh Devi Maa Ashapura at the Mata Nu Madh (temple). On the way to the shrine, I was told the story of Devchand, a rich baniya, who had built a temple there and how Maa Ambika prakat hui [made an appearance] there 1,400 years ago.

I trekked there. When I came out of the Madh and called up Mumbai, my folks told me my father had just been declared out of danger.

But the film is not your story.

The story of my film was developed after two-and-half years of extensive research and interviews with people of all classes who had their own stories to narrate about their experiences with Mata. I realised that money can buy the means of happiness, but not happiness.

Vinod Chopra has termed your film a Sholay in its genre.

That is because devotionals are usually made on shoestring budgets. I wanted to make a film without compromise, and not as a business proposal. All the profits from the film will go the shrine and other charities.

The script focused on reality rather than gimmicks -- we did not have an actress playing the Maa, and we have denounced superstition in the film.

We spent eight months on pre-production. I was very lucky to get an involved team -- Jaya Seal and Raj Verma, my lead pair; Milind Ukey, my director, whose Marathi film Devki had broken all records by winning 36 different awards in one year, and my music director Ismail Darbar who was so charged.