Over a decade ago, Mira Nair turned Dr Abraham Verghese's best-selling memoir My Own Country into a well-received telly film starring Naveen Andrews. On Wednesday, Nair and Verghese met at Asia Society in New York in a conversation discussing life and the arts. She was intrigued by how Verghese, a Stanford University professor, after writing two widely successful memoirs had turned to writing his first novel, Cutting for Stone. He, in turn, wanted to know how Nair, after making documentaries like India Cabaret and So Far From India for over seven years in the 1980s, segued into feature films.

Some of her documentaries were aired on PBS. "Yet it (her efforts) was going into void," she said.

Her documentary work, research and shooting, had taken so many months that she felt cheated that they had a small audience. While she worked on India Cabaret, an examination of Indian patriarchal society's involvement in the strip-club scene, she lived with cabaret artists for four months. "I was mistaken for a stripper," said Nair, who was in her mid 20s then. Her family also thought she had become a stripper, she said chuckling, adding her name was temporarily removed from the family tree.

Verghese, Professor and Senior Associate Chair for the Theory and Practice of Medicine at the Stanford University School of Medicine, said he was always drawn to fiction. One of his first published short stories Lilacs (in The New Yorker) had a protagonist with HIV. Its publication in 1991 led him to write My Own Country distilling his experiences of caring for people with HIV in rural Tennessee.

Verghese and Nair agreed that writing fiction and making feature films gave their creators more freedom to deal with their characters and manipulate them. She had greater control in feature films, how she told the story, Nair added. 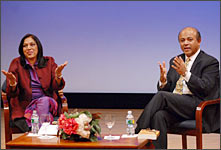 Verghese said the process of creating a short story or a novel made him feel 'liberated.' His second book The Tennis Partner resulted from his friendship with a medical residents who had many inner demons including sexual and drug addictions, he had said in an earlier interview with rediff.com.

"I had an offer to write a third non-fiction book," he said. "But I was keen to get back to fiction."

Nair asked Verghese of Thomas Stone one of the central characters in the novel. He is a physician who is hurting himself, and surely many people around him. The novel, which is set in Ethiopia and America, has many Indian characters including a beautiful Catholic nun from Kerala. Her twin boys, who become estranged, carry much of the novel on their weary shoulders.

Verghese said while many doctors go into medicine because they want to heal their own wounds while helping their patients heal, some doctors like Stone 'do not have enough wisdom' to save themselves.

As a physician who owes his deep insights into the human mind and soul to his reading of writers such as Tolstoy, Chekov and Somerset Maugham, Verghese distinguishes between cure and healing. He reminds himself and his students that the healing process can continue even when there is no cure.

He asked the audience to imagine a situation that when they reach home they find everything valuable is taken away from their homes. But the police recover the valuable. There is a sense of cure as a result. "But you are not healed (by the discovery of the stolen material)," he said.

It was inevitable Nair and Verghese discussed the concept of home. Both have lived in several countries.

When he wrote his memoir My Own Country, Verghese had confessed that he felt like a man without a home. The son of Indian teachers in Ethiopia, he was thrown out of the country following a military coup there in the mid 1970s, studied medicine in Chennai, and came to America to work in a rural hospital. He had thought of a life in Ethiopia, he said, and when the new rulers classified him (and other immigrants) as an expatriate, he was shocked. He wasn't really aware of the word expatriate till then. 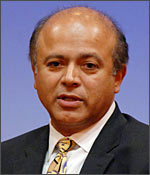 Nair, who went to college in New Delhi before coming to Harvard for a graduate program, met professor Mahmood Mamdani, who would be her second husband, in New York. He had been exiled, like thousands of Asians in Uganda, by Idi Amin. But after the fall of Amin, he returned to Uganda.

Nair and Mamdani have a home there. The filmmaker spoke of her garden in the African country and how gardening for nearly two decades had brought her closer to the soil and people of Uganda. Given their professional lives -- Mamdani is professor of government at Columbia University  -- the couple cannot think of settling down in just one city.

When their son goes to college, Nair said, she hoped that Mamdani and she would be able to divide their time between India, Uganda and America equally. "I could not do without one of them," she asserted.

Nair, who is a devotee of B K S Iyengar's yoga system, said practicing yoga has taught her to 'live in the present.' She found nostalgia useless, she added.

Verghese said that as a writer, he had benefited from his status of being an outsider, and he could observe things from a different perspective. But he admitted he envies people who have a town or city they can really call as their own. He also spoke about why he emphasizes on doctors knowing their patients better and not rely on computer generated images. The novel, which is published by Knopf, reflects that philosophy.

When a patient sees a doctor, often he or she 'bares the soul, then bares the body,' to the doctor, he continued. Physicians then have a responsibility 'not to diminish the trust.'

Nair was curious how Verghese, a practicing physician and a professor, finds time to write, especially a novel such as Cutting for Stone which has 560 dense pages. It took him six years to write the book, Verghese said, adding he stole time from his work, writing and revising mostly over the weekends. He was then teaching and working in San Antonio where he was the founding director of the Center for Medical Humanities & Ethics at the University of Texas Health Science Center. He is now an adjunct professor there.

With three boys and 'a demanding wife,' he said amidst chuckling, he could not find a specific time to write. But people can always create time for their writing, he mused. Turning off the TV for a few hours helps, he added.

At Stanford, he gets two days to write without any distraction by his medical work. The university publication says he has a secret writing place on the campus and hardly anyone knows the room. But medicine will always continue to be his life.

'Medicine is a demanding mistress,' he writes at the end of his novel, 'yet she is faithful, generous, and true. She gives me the privilege of seeing patients, and of teaching students at the bedside, and thereby she gives meaning to everything I do.'

Though he cannot think of not writing a book connected to medicine, he said in an interview being a doctor provided him no short cuts.

"Writing is still hard," he said in an interview, "and the real art is in the revision, the real talent is in having the stamina, in being able to delay gratification over many years it takes to get it right."