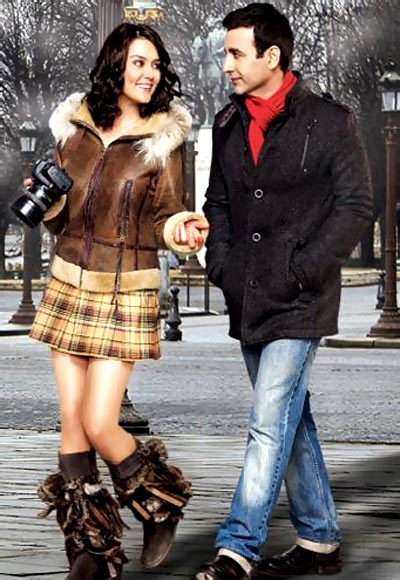 Gaurav Chanana became a household name as Dr  Rahul Mehra in the popular soap Sanjivani. Then, he suddenly disappeared.

Seven years later, Gaurav is back, this time as Rhehan Malliek playing Preity Zinta’s soul-mate in her new love story, Ishqk In Paris.

Gaurav, incidentally, is not trying to hide his identity as a television star. Instead, he speaks fondly of those days.

“It was a heady success," he says. "I was suddenly recognised wherever I went. But soon I realised this is not what I wanted. It was films that attracted me. So I wrapped up my work on Sanjivani and headed to Bollywood with no godfather."

Gaurav, who calls himself Rhehan now, admits it was a tough struggle to keep afloat.

“Back then, television actors were not accepted on celluloid as comfortably as they are now," he says. "I had to make concerted efforts to avoid the temptation to return to television. I saw actors, who came after me on television, whiz past me in expensive cars. I was in a financial crisis. But I had to constantly remind myself that television was not where I wanted to be, no matter what the price.”

“I had no one to guide me," he explains. "And no queue of producers on my doorstep. I did what I could. When Prem Raj (the director of Ishkq In Paris) came forward with this offer, I couldn’t believe my luck. Why me opposite a huge star like Preity?"

Preity, gushes the actor, never made him feel small.

“She is a very experienced actress and a formidable star," he says. "She never made me feel like a junior. She treated me as an equal. Her logic was simple. When she started in Mani Ratnam’s Dil Se, Shah Rukh Khan and Manisha Koirala, who were huge stars, made her feel at home. I am eternally grateful to the three ‘P’s in my life -- Preity, Prem and Paris -- for giving me this opportunity.”

Rhehan admits he is excited and nervous. “I gave up television years ago to pursue my celluloid dream.The transition period has been long and painful. I have changed in appearance. Even my name is different.”

The name change, he says, is because of an uncle. "My uncle did it first. He changed his surname from ‘Chanana’ to ‘Malliek’. My new name is a homage to him. I didn’t want to be known as a Khan or Kapoor. We’ve enough of those in the film industry.”