INXS is lukewarm in Mumbai

Back when I was in high school (Class IX), I remember gyrating to the hit single Suicide Blonde by Australian band INXS (pronounced 'In Excess'). During college, I became briefly obsessed with the band, courtesy an older cousin who had a tape of Kick, their most popular album.

Back then, Kick in my Walkman blocked out the constant rants of a nagging hostel warden and its songs Mystify, Devil Inside, New Sensation and Mediate were a welcome distraction during that angsty time.

The tunes were catchy, as were some guitar sequences. But the big draw for me (and possibly a million teenage girls across the world) was Michael Kelland Hutchence, the lead singer. His vocals were raw and sexual. And Michael himself was wild, rebellious and supposedly theatrical in concert, only adding to his infamous appeal, which brought him lovers like Kylie Minogue, Paula Yates (ex-wide of singer Bob Geldof) and supermodel Helena Christensen. He also co-wrote most songs along with band member Andrew Farriss.

When I heard the band was coming to India to perform in Mumbai and Bangalore, those popular tunes and college days came rushing back to me. But tragically Michael was no more; he committed suicide in 1997, aged 37.

The band performed in Mumbai on October 5 at the MMRDA Grounds in Mumbai, a popular concert venue. Tickets were overpriced at Rs 700 and Rs 1,200. The gates opened at 6 pm, and by the time the band members got onto the stage, the auditorium was somewhat full. 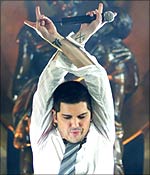 And then there's new lead singer JD Fortune, handpicked by the band during the 12-week reality show competition Rock Star: INXS last year. Would he live up to Michael-mania? That was the question.

INXS opened with the pulsating Suicide Blonde. This went down well with the crowds, who seemed to enjoy songs from the band's classic Kick best. Fortune, 32, a Canadian rock singer from Nova Scotia, burst onto stage sporting a black jacket, denims and a tie dangling around his neck.

He has a deep, husky baritone that resonates in one's ear, in a good way. But Fortune took a while to get into his element and seemed a little breathless at times -- maybe because he was smoking most of the time.

He was definitely no replacement for Hutchence, but the ones that seemed quite taken with the man were the yuppie, college going teenage girls, who screamed wildly every time he motioned to take his T-shirt off.

While Michael sported wild curls, Fortune has a close crop. His dance moves and singing style seemed more boyband than rock star, more pop than rock. The original outift was soon drenched in sweat which he squeezed dry, before changing into a tight black T-Shirt with the tagline, Mr Wrong.

Fortune paid lots of tributes to the audience and India and predictably dedicated the song Mystify to India. He invited the audience to a home-cooked meal, "if we happen to be in the neighbourhood" (in hometown Canada). "And do remember to bring some of that great Kingfisher stuff," he winked.

It's usually a pretty young thing from the audience who gets to shake a leg and share a kiss with the lead singer on stage, but Fortune pulled up a little boy, Rishant, instead who got to jam with the group with a pair of maracas. 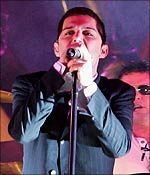 The band's new songs Afterglow and Pretty Vegas seemed popular with college kids, and many knew the lyrics. A hardcore INXS fan kept jumping wildly next to me, belting out the lyrics of every song, both old and new.

The evening showcased some great moments by the original members of the band. Pengilly played the saxophone and strutted his stuff on the guitar. There was also a black female singer who belted out some great back-up vocals, gospel style.

As the concert progressed, many fans were eagerly awaiting two favourites, New Sensation and Beautiful Girl. The band said goodnight, the crowds stayed put. Then the band retuned and finally did the songs, with New Sensation getting the loudest applause.

They missed out on a great song -- Mediate -- in which every line ends with the suffix 'ate.' I caught it on TV this Sunday, when they were playing a classic INXS concert. Michael Hutchence was on the mike, and as they say, he simply took it away.