'When films resonate with the audience, it gives you the confidence to take more risks.' 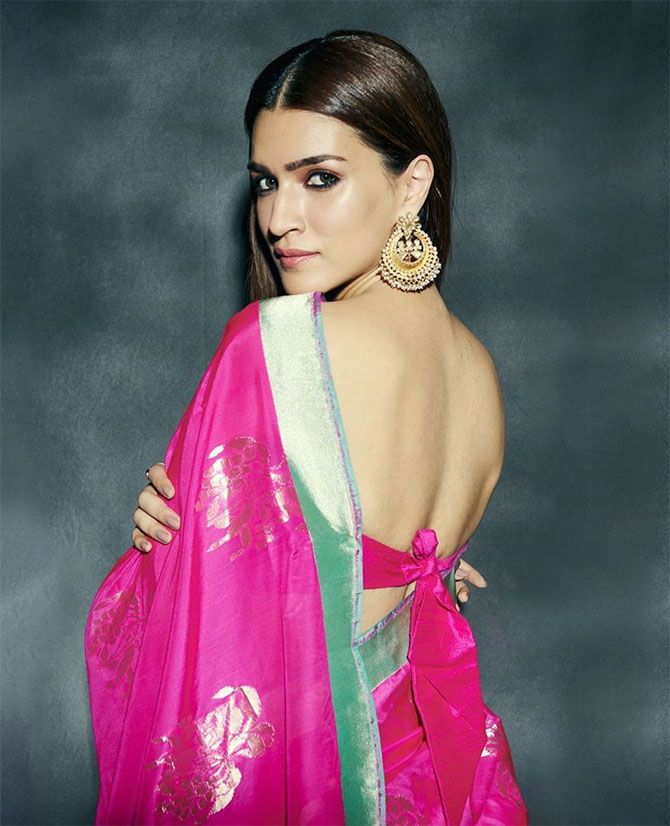 Kriti Sanon gets ready for her historical drama Panipat, which releases on December 6.

It's an exciting role for Kriti as she was directed by Ashutosh Gowariker who makes his female characters stand tall in his movies.

"He is someone who cannot see his women weak. He just cannot. He cannot make weak women characters. I think it comes from the fact that he has a very strong woman with him, (his wife) Sunita," she tells Rediff.com Contributor Mohnish Singh. 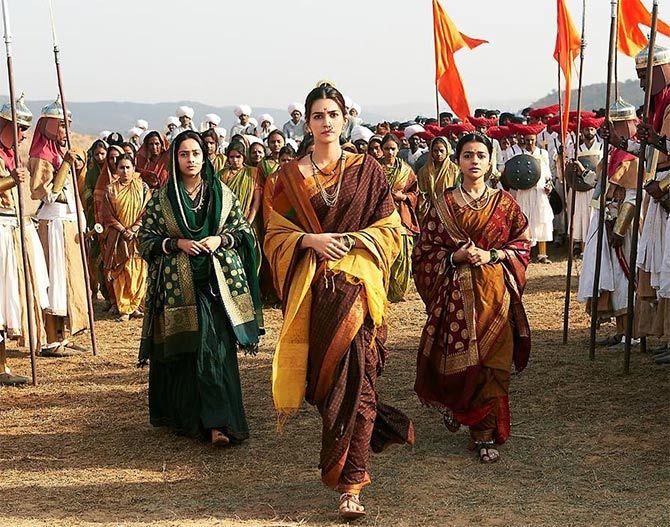 How tough was it to play a Maharashtrian character in Panipat?

Once you start enjoying what you do, it is not that challenging.

But yes, you have to keep reminding yourself that you are not in today's times, but in a different era.

What happens is that sometimes, certain expressions and reactions are very contemporary and then you have to tell yourself, 'No, she would not do this at that time.'

So that was a little challenging.

Otherwise, to play a Maharashtrian was not so difficult.

I had done a Telugu film and still do not know the language at all.

I used to have pages of dialogues and when I would pronounce them, the makers used to say, 'You know, you are pronouncing it really well. You sound like someone who stays here.'

So when I started my dialogue training for Panipat, I wanted to make sure that whatever little Marathi I speak in the film must sound like it's coming from a Maharashtrian, as if she has been talking like this since childhood.

Marathi is a beautiful language. It has got a flavour -- that sweetness as well as the spiciness.

I used to try and improvise on set.

I would go to Ashutosh sir and ask him if I had to say a particular word before a sentence, then how would one say that in Marathi.

At the end of the day, he would be like, 'You are the only one speaking more Marathi than anyone else in the film.'

I started enjoying it.

Obviously when you are in that navari sari, wearing the khopa and the nath, your body language changes.

The way you walk, the way you keep your hands, everything changes.

Initially, when I was thinking about how I should play this character, I realised that when we think of period films, we tend to shift towards a body language that is more poised, more royal.

There has to be grace, our speech becomes slower...

But then I thought that Maharashtrians have a different way of walking and there is always a little hand movement.

There is no calmness mostly, there is a little playfulness and some spice.

This does not happen with Mughals though.

Also, Parvati Bai was not born in royalty. She is a simple Maharashtrian Brahmin who gets married into royalty.

So obviously, I am not a Peshwai from the beginning.

I felt her body language would be simpler.

Still, I would keep checking with my director, asking him if I was going fast or if he wanted me to behave a little more like a queen.

It is only the films that we keep watching that we know that okay, kings and queens walk like this.

But actually, any two people will walk differently. 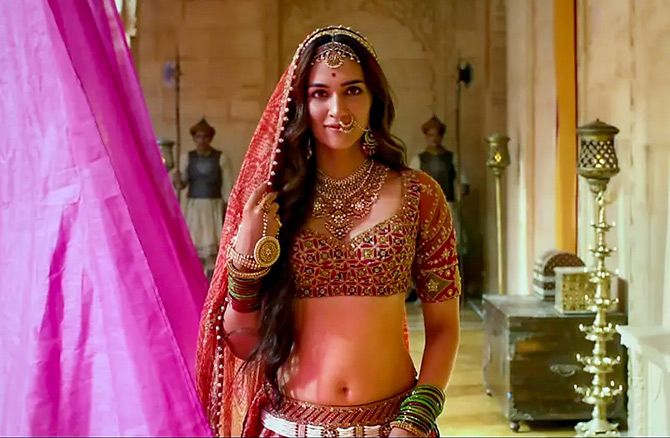 IMAGE: A scene from Housefull 4.

You must have worn a lot of jewellery.

I wore a lot of jewellery in Housefull 4 too.

There used to be competition between Arjun (Kapoor, her co-star in Panipat) and me about who was wearing more jewellery.

In many scenes, I used to be like, 'How come you are wearing four necklaces and I am wearing only two?' (Laughs)

I have never seen myself as a Marathi-looking girl, as I am Punjabi.

But when I saw myself in that attire, I felt I could have never imagined myself like this.

So obviously when you look like a different person in the mirror, it does excite you as an actor because you feel different. Did you learn sword fighting and horse riding?

Fortunately, I had already learnt a little bit of both.

I had utilised horse riding, but not sword fighting in any film before.

Ashutosh sir had told me in the beginning that was a scene which required me to fight with a sword. It was supposed to be shot in two days.

I was like why only two days, take more days.

But the scene was choreographed in one day!

I think the stance, the posture and everything is very important because Parvati Bai has been doing it since childhood. She knows it.

It is not like she is picking up the sword for the first time.

But to be doing that in sand, in a navari sari, when there is dust all over and your vision is not clear, that was challenging. But a lot of fun. Did you do any research on your character?

I tried googling, but there is not much written about Parvati Bai.

There are only the basic facts of where she was born, where she travelled and how she died, that's it.

There is not much about how she was... a lot of it came from Ashutosh sir.

He is someone who cannot see his women weak.

I think it comes from the fact that he has a very strong woman with him, (his wife) Sunita.

I am so glad that his films are period, but his characters are very contemporary.

He has made Parvati Bai a contemporary character.

He has made her someone who also fights to save her women, her people.

There is a point in the film, in the journey, where she steps up and helps the army in a very important way.

Giving that power, that stature, to her is very empowering.

When you play such a character, you feel proud. 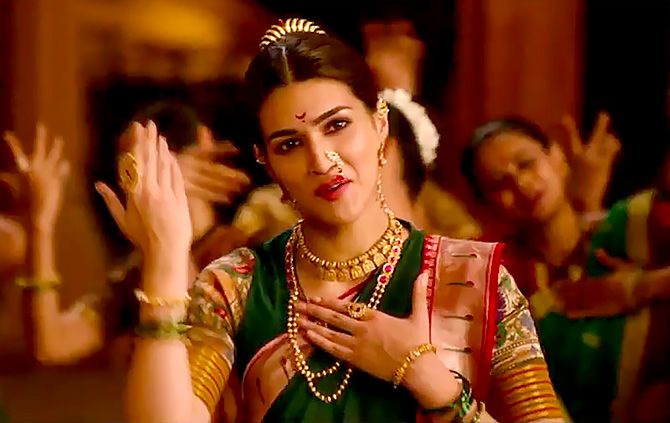 Did you get any literature offline?

My history book was Ashutosh Gowariker.

I think he is better than any history book than I can find, he is so well read! He knows every small detail of what had happened.

And not only about this war, he knows it in general.

It is a three-hour film, so you cannot show everything possible in it.

As an actor, it is just important to follow his vision.

Which is your favourite Ashutosh Gowariker film?

I love Lagaan and Swades.

If I say historical film, I love Jodhaa Akbar.

One of my favourite scenes in the film is that sword-fighting scene featuring Hrithik (Roshan, who plays Akbar) and Aishwarya (Rai, who plays Jodhaa).

In all his films, Ashutosh sir has shown immense respect for women.

He sees them as strong-headed people, who can take a step that is equal to that of a guy. 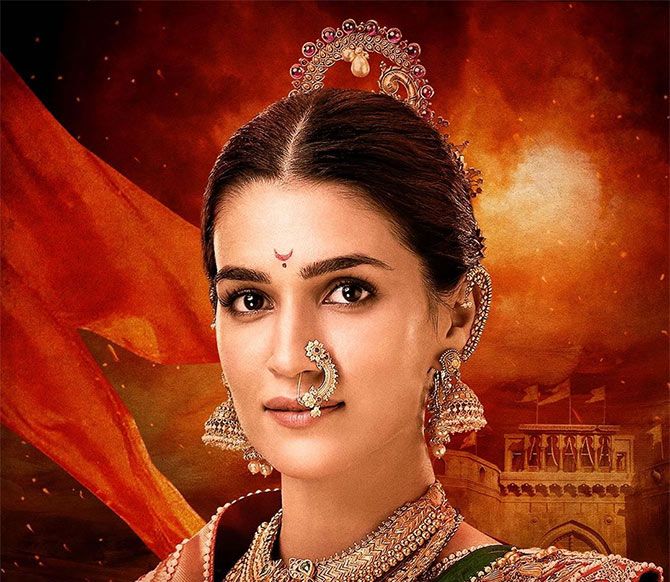 How was it to work with Sanjay Dutt and Zeenat Aman?

I have not shot with Sanjay Dutt, and I was very upset about that.

I told Ashutosh sir to give me at least one scene with him, but he said, 'Ahmed Shah Abdali and Parvati Bai had not met. How do I give you a scene?'

I was a little heartbroken because I saw him on set, interacted with him, but never shot with him.

I will fulfill that in some other film.

But I got my revenge as no one got to shoot with Zeenat Aman except me!

I was very, very, excited when I shot with her.

It is a very important scene in the film and a long one.

I was a little nervous in the beginning because I did not know what to do.

She is Zeenat Aman, a legend.

You would never dream of getting an opportunity to work with her.

I did not want to say any dialogue wrong, so before the shoot, Ashutosh sir and I went to her vanity to do a reading.

She was so warm and lovely.

The way she sort of hugged me in the beginning was amazing.

I mean she did not have to do that, but she appreciated the work I have done and she just eased me in that one reading.

Then I saw that even after being a legend, even after being so experienced, she still had that hunger of asking Ashutosh sir again and again, 'Am I doing it right? Are you happy? Is there anything that you want, Ashu? Should I do anything more?'

When that comes from an actor, who is so experienced and who is a legend, it makes you feel this is how you want to be.

I wish I am like that later when I am still hungry about making sure I am perfecting everything.

Do you believe that Bareilly Ki Barfi was the turning point in your career?

Yes, it changed a lot of perceptions and made people take me seriously as an actor.

Later, when I bagged Luka Chuppi, it made me confident enough to take up different kinds of roles and not be scared.

When films resonate with the audience, it gives you the confidence to take more risks.

That's why I could take up a Mimi (her next film based on surrogacy) at this point. You are also playing a Maharashtrian in Mimi, right?

The basic core idea has been taken from Mala Aai Vhaaychya, but it has been turned into a different script with different characters and screenplay.

So in Mimi, she belongs to Rajasthan and stays in Mandwa.

You see, I am going pan India.

I have covered UP, then a little bit of Gwalior and Delhi (smiles referring to her films Bareilly Ki Barfi and Luka Chuppi)...

It is not preachy or serious.

It is not like you are going to watch a documentary film on surrogacy.

It is a very entertaining film, filled with humour, and a lot of ups and downs.

There is a beautiful graph of the woman I am playing, Mimi, where she wants to become an actress.

She is a dancer, and is ambitious.

How she ends up becoming a surrogate mother, how her life changes... (is what the film is about).

What gave you the confidence to take up such a bold script?

I felt I was ready and so was my audience.

I have finished 40 per cent of the shoot.

Laxman sir (Utekar, director) and I have a great tuning. I tell him we have telepathy because we end up saying the same things.

If there is a scene and I have an idea, he has the same idea.

Mohnish Singh dabbled as a copywriter before making a transition into entertainment journalism.
Besides a penchant for writing about movies and television, he loves to engross himself in books and old Bollywood melodies. You can contact him at movies@rediff-inc.com 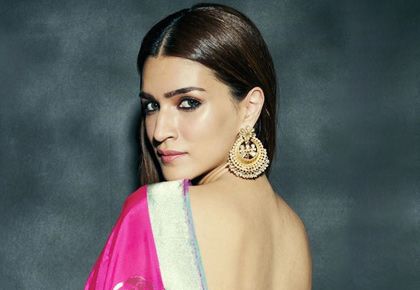 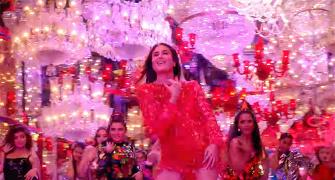 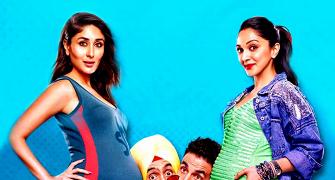