News
Business
Movies
Sports
Cricket
Get Ahead
Money Tips
Shopping
Sign in  |  Create a Rediffmail account
Rediff.com  » Movies » How I survive in a family of actors!

'Everyone at home has a very strong point of view about how it should have been.'
'So opinions clash, points of view clash.'
'Everyone will have their favourites, and that '"I didn't like that moment in your performance".'
'"This was such a kaam-chalao thing you did".' 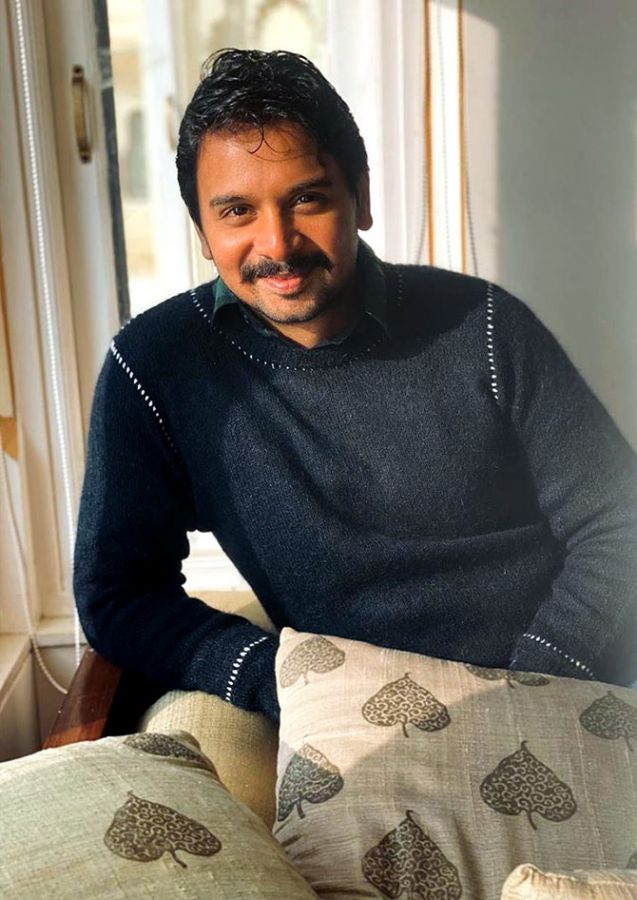 "Wake Up Sid was a beautiful journey because everyone was so young. But it was after that project, when I got other opportunities, that's when I realised it was a very different kind of industry. That's when reality set in..." Namit Das trails off.

That's probably one of the biggest life lessons the 36-year-old actor has learnt in Bollywood.

But it's all coming around for him.

Sixteen years after he started out, he has getting a lot of love for his Web series Aarya, and everyone is looking forward to his next, Mira Nair's A Suitable Boy.

"It seems to be coming together with Jawahar. Everything that I have played so far is opposite to what he is. That has added to the versatility of what I can bring to the table," he tells Ronjita Kulkarni/Rediff.com.

You come from a family of singers (Namit's father Chandan Dass is a well known ghazal singer). What made you want to become an actor?

I was very sure that I wanted to become a singer, but I didn't get the right direction in college, so I became an actor.

I started doing theatre and I loved it.

Were your parents surprised?

Not at all. I could have done anything and they would have said do it, whatever makes you happy. That's the kind of atmosphere we have at home.

Your first film was The President Is Coming in 2009. How did that happen?

It was a play which we had done and we had been touring with it for a long time.

When Rohan Sippy came for one of the shows, he wanted to make it into a mockumentary.

In those days, the idea of a mockumentary was completely unheard of.

That's how it was made into a film.

Kunal Roy Kapoor directed the play and the film.

IMAGE: With Ranbir Kapoor in Wake Up Sid.

When you did the film, was that when you realised you wanted to be a movie actor?

I still hadn't decided to be an actor! (laughs)

I go wherever life takes me.

But yes, the transition from a theatre actor to acting in front of a camera took time.

The President is Coming was easy because we knew the script backwards. We had performed it so many times.

(My next film) Wake Up Sid was a beautiful journey because everyone was so young. The average age on set must have been 25-26.

But it was after that project, when I got other opportunities, that's when I realised it was a very different kind of industry. That's when reality set in.

The beauty of it is that if you have patience...

When did you really feel that you want to become an actor?

It was during a play called Chairs, directed by Atul Kumar. I was on stage with (actress) Ayesha Raza Mishra in Ahmedabad.

I think something happened there and I felt that acting would not leave me now.

Before that, it was always, I am going to finish this project and then do something else.

But that was the evening when I felt it would be for life.

When I came backstage, my director said what a great performance, did you feel it...

And I said, yeah, I felt something.

And then I saw that there were only four people in the audience. (laughs) 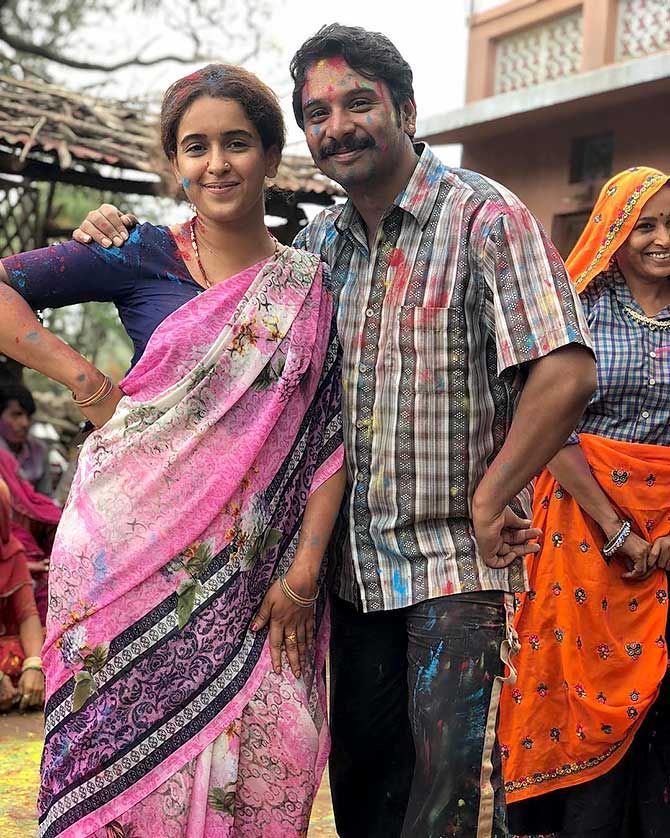 Do you feel bad when that happens? When you give your best but no one's watching?

You have done your best, that's it.

As (Japanese novelist) Haruki Murakami says, 'Pain is inevitable but suffering is optional'.

And I genuinely decide not to suffer.

When did the movie offers start coming?

After Wake Up Sid, my career took off. Since then, I have always been busy with films, TV, so many ads...

I was a deejay for NDTV Imagine, I also hosted on Channel [V].

I've done many things and learnt in the process.

But there have been single shoutouts. Like Wake Up Sid, obviously.

Then there was Ghanchakker, Sumit Sambhal Lega, Sui Dhaaga.

Now, it seems to be coming together with Jawahar (the character he plays in the Web series, Aarya). Everything that I have played so far is opposite to what he is.

That has added to the versatility of what I can bring to the table. 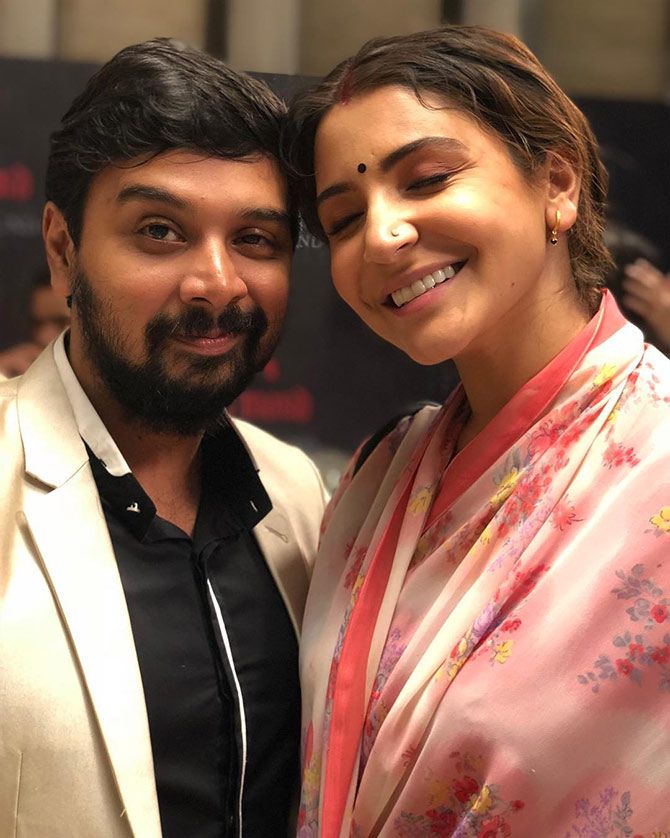 Your films Sui Dhaaga and Pataaka released on the same day. Was that surreal for you?

It was completely surreal!

How many times does it happen that on a Friday, an actor has two prominent releases? One with Vishal Bharadwaj and the other with Yash Raj.

Both the characters were received very well, Sui Dhaaga perhaps a little more.

It was a great day. I went for two shows with my family.

Sui Dhaaga must have been especially special because your mother made her debut in it.

Yeah, yeah. I remember making a joke on set that if anyone wants to make her biography, it would be called Debut at 54.

Such a great performance!

It came as a surprise for all of us.

She has been a homemaker for more than 35 years now. For the first time in her life, and it really gives me goosebumps to say that, she stepped out of her house without my father.

The outdoor schedule was very tough. It was two-and-a-half months in Madhya Pradesh.

But she made all those people her friends. 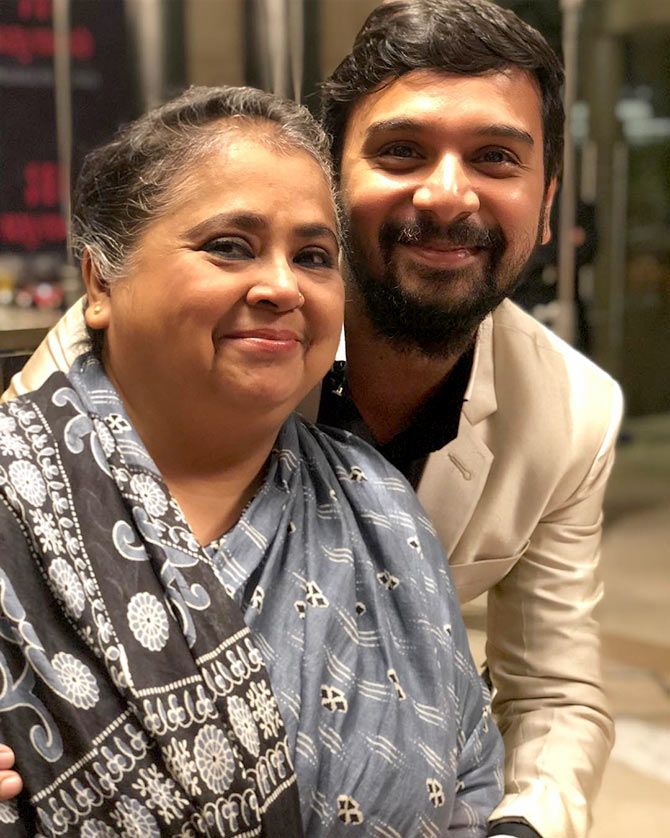 What was it like to have mum on set? Did she make sure you had your meals on time?

You know, that's one of the reasons I did this film.

Sharat (Katariya, director) had told me that it would be great if I did this character, and it would be fun with my mother.

It was a great opportunity because whenever people will go to see Sui Dhaaga, there will be those two-three scenes where we have been filmed together.

How beautiful is that!

On set, she would try to be very professional, but at the same time...

I remember doing this scene with her. I was rehearsing and she was just looking at me. And I said, 'Mama, line bolni hai.'

She was just looking at her son. 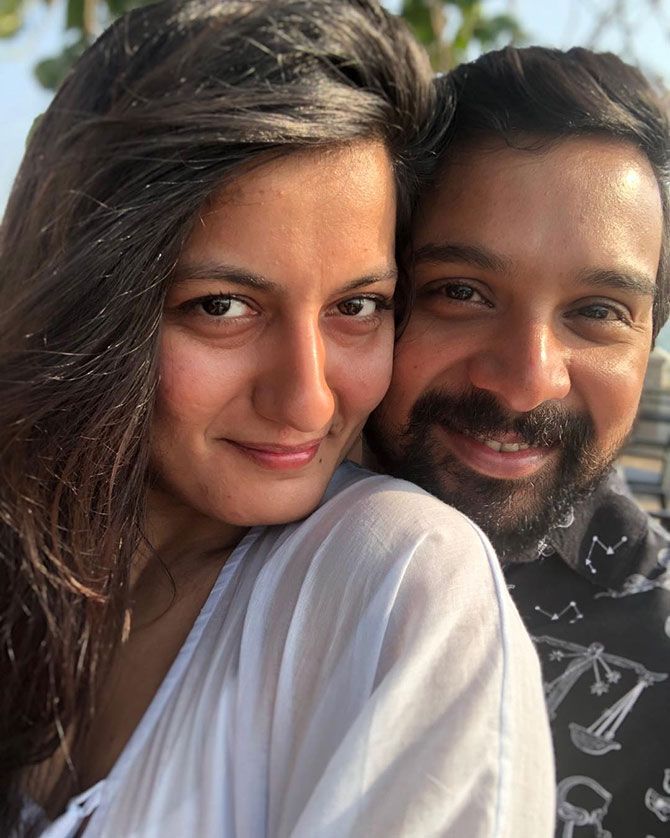 Your brother-in-law Sumit Vyas is a well-known actor too. Do you compare notes?

I remember making a joke at a family gathering and saying that I wish one of us was an engineer, life would have been easier.

My wife (Shruti) is an actress and writer.

My father-in-law (B M Vyas) is a legendary writer.

Sumit is the star of the wWeb world.

My father is a singer, and my mother, who used to be a homemaker, also decided to become an actor.

It's an art heavy household!

It's difficult to exist! (laughs)

There is a lot of pressure at home whenever there is a project releasing.

In your career, you worry about the people who matter the most, and your family matters the most.

And it is from them that you want that respect the most.

So it is pretty heavy whenever you are exhibiting your work to your family -- and they are never happy!

You have some heated moments as well, but things do calm down after some time. 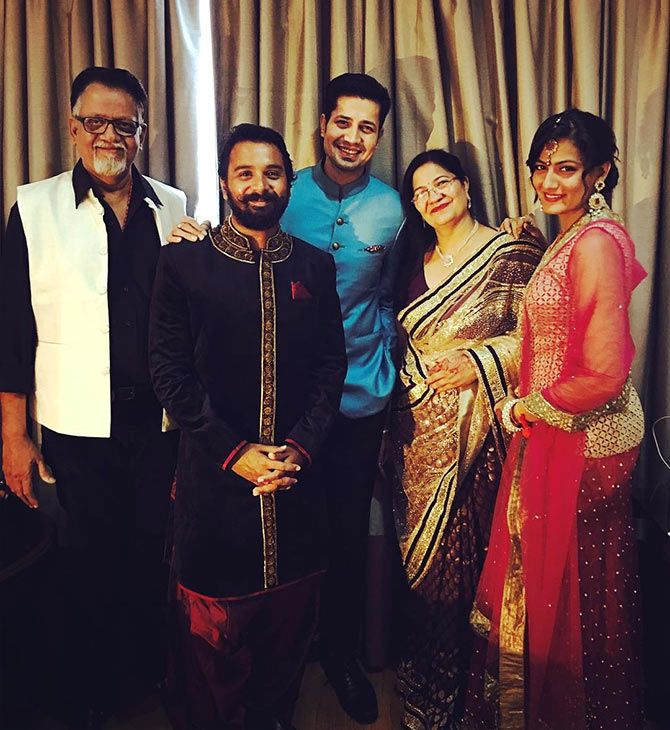 Everyone has a very strong point of view about how it should have been.

Everyone will have their favourites, and that 'I didn't like that moment in your performance' or 'The character you played or the film you did.'

Or that, this was such a kaam-chalao thing you did.

And you can't lie to your family.

I can't lie to my wife, right?

When she sees me, she sees me in totality. So when I do something good -- or bad -- it will be noticed by my wife. She will see through it.

That keeps me checked.

So whenever I am showing a scene to my wife or discussing a project with Sumit, I am not looking for a 'Wow, you're so good'.

I expect them to bring in a perspective that I might not have seen.

How do you spend your days?

When I get up in the morning, there is so much I want to achieve.

And because of the times we live in, there is also housework and cooking, plus promoting my work, doing interviews.

There is some me-time as well.

I cook on the days I have to, because everything is divided between my wife and me.

I've been practicing my omelet, so the breakfast is turning out nice.

How do you spend your me-time?

I haven't read a single word for the last 25 days because I've been so busy with these promotions.

But my me-time is usually reading, playing the piano or meditation. 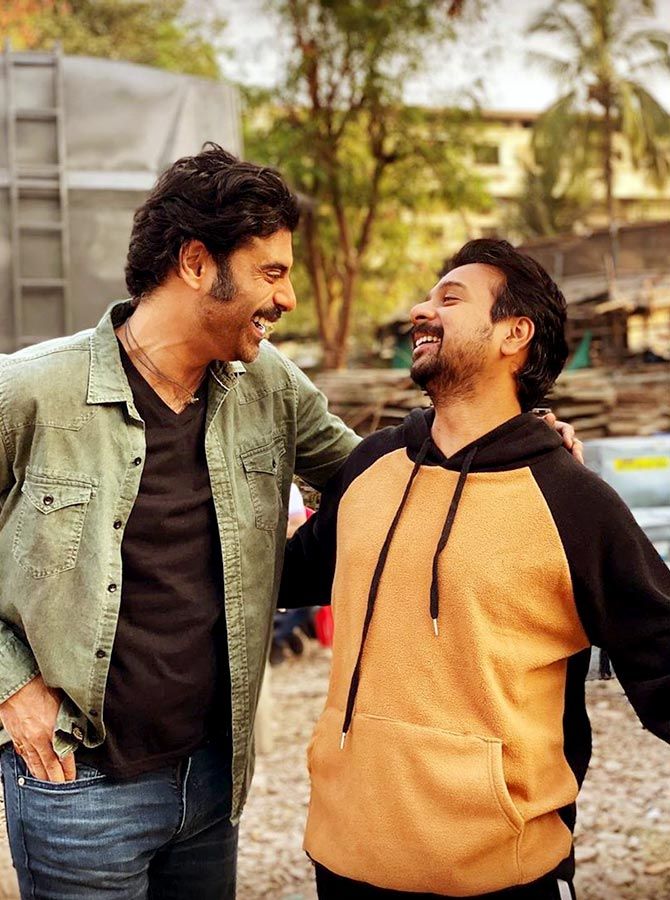 I don't get any time.

I was made to watch Aarya because my parents were really keen on seeing it.

I just seen bits and pieces of A Suitable Boy, the parts I have dubbed.

I enjoyed this Netflix documentary on Quincy Jones.

I saw one on Bhimsen Joshi, one on Bismillah Khan, made back in the day.

I saw Ford Vs Ferrari and enjoyed that.

I saw A Beautiful Day in the Neighbourhood. Tom Hanks' performance is so complete. I really wish I could be like him. I saw it twice.

Does the lockdown worry you?

Uncertainty is really daunting for humanity.

When I wake up every day, I wonder when it is going to end.

But then, there's no other way to survive this.

I love the line from that ad, 'Iodex maliye, kaam pe chaliye'.

That's what I tell myself. 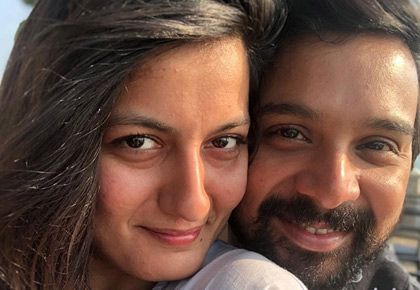 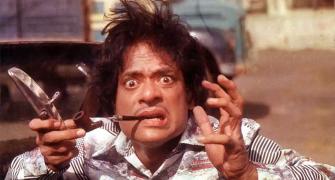 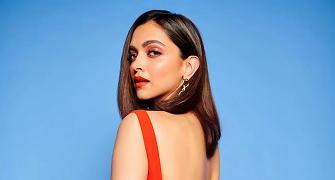 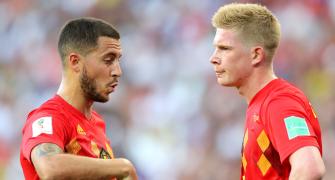 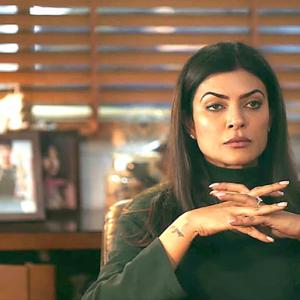 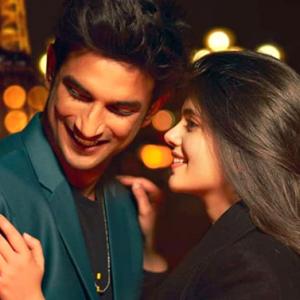