Never mind the critics who complained The Guru failed to offer nirvana. Audiences in 10 North Ameri

can cities roared with laughter, spending about $640,000 in three days on the movie.

It had a far higher per screen average than most other films in release.

If the momentum holds, the sex comedy could become a modest hit. Mira Nair's Monsoon Wedding which, like The Guru was also released by Universal Pictures and grossed about $13 million in North America, is clearly the movie it will have to surpass at the box-office.

At least one reviewer hopes for big numbers for the movie. 'If I were a swami, I'd predict The Guru will be the big hit of 2003,' declared Daphne Gordon in the Toronto Star.

The Guru did not exactly curry favors with many critics. 'Omm-barassing,' declared People magazine.

A handful of critics at major daily newspapers and weekly magazines offered favourable reviews in contrast to the British reviewers who mostly panned the comedy that nevertheless grossed an impressive $10 million in the UK. Among the publications that slammed the movie were The New York Times and New York Post. Among those who liked it were the Toronto Star, Los Angeles Times and Entertainment Weekly (which gave the film a B plus).

'Calibrated to please, The Guru is a down-market but enjoyable goof,' wrote Manohla Dargis in the Los Angeles Times. 'It's also not as dumb as it looks.'

'Central to the movie's charm is how it knowingly taps into two of our more cherished mythologies -- inevitable true love and immigrant triumphalism -- but always at an oblique angle,' the reviewer continued. 'One of the girls, after all, earns her keep performing in X-rated movies and seems no worse for wear, while the other is a Park Avenue seeker who can't tell Vishnu from Kali. The boy, meanwhile, is a subcontinent native who's landed in this country with the belief that nothing can thwart his American dream, not class, ethnicity or the fact that the only Indian star he knows of is Apu Nahasapeemapetilon, the Kwik-E-Mart owner on The Simpsons.'

Daphne Gordon cheered the movie's romantic appeal. 'This is a romantic comedy, so you gotta know they'll overcome the obstacles to happiness just in time for the fairytale ending. Isn't that what we love about Hollywood?' she asked in the Toronto Star.

'Thankfully, the means to the happy ending involves a fantasy dance sequence featuring Sharonna (Heather Graham) backed up by a cast of Indian dancers, singing in Hindi and wearing a colourfully swirling sari. Isn't that what we love about Bollywood?' 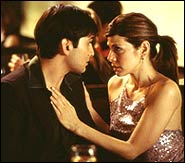 The film is more serious than the plot summary may suggest, Gordon argued: 'It may seem utterly light and frothy on the surface, but there are interesting undertones hiding under The Guru's turban. The story touches on the challenges immigrants face, poking fun at the lack of respect for Indian culture in North America.'

Jimi Mistry, who makes his Hollywood debut with the movie in the title role, should have chosen a better vehicle, said Jonathan Foreman who gave the film two stars (out of four) in the New York Post.

Dargis said Mistry (Ramu in the movie), who stood out in the British comedy East Is East, embraces Ramu's innocence, never letting irony hijack the character.

Mistry said in an interview he did not want Ramu to be played as a joke, and the director wanted it that way, too. Ramu becomes far more stronger in the long run, than the Americans in the movie, he said. 'I don't want to play an Indian character that is laughable or silly,' he said.

Many critics thought he had done the right thing. 'It is the least caricatured performance amid an ensemble of one-note cartoons,' Stephen Holden wrote in The Times.

But, he noted, the movie was an uneasy hybrid of Hollywood and Bollywood styles. 'Following the Bollywood formula,' he wrote 'the story is put on hold for a deliriously glitzy interlude of singing, dancing, grinning and booty shaking.'

Giving the movie two and half stars (out of four), USA Today complained that among the many silly things in the movie was the squirrelly type played by Marisa Tomei who is seen as an unhappy woman seeking nirvana from the guru. 'The actress took this silly role in 2001 before getting an Oscar nomination for In the Bedroom,' the reviewer noted. 'Maybe a guru would have had a clearer crystal ball.'

The Chicago Tribune not only reviewed The Guru but also discussed Bollywood, making the typical mistake in noting that Bombay produces more than 800 films each year. 'American audiences may have to bring a lot of knowledge (not to mention patience, as many Indian blockbusters are three-plus hours) to any other melodramatic, overly-sentimental Bollywood experience,' reviewer Robert K Elder noted.

'But makers of The Guru are smart enough to cast their film as a cultural primer and still remain true to their mission.'

'Although sexually broad (most Bollywood films don't even allow kissing), The Guru hits more laughs than it misses and its characters are likable, empathetic people. Who couldn't be won over by Graham slinky wriggling to Billy Joel's [song] Just the way you are?

'Everything else, from the culture clash jokes to the last-minute wedding-stopping pronouncements, are pure formula -- a cultural value shared by Bollywood and Hollywood,' continued the Tribune, which has reviewed several desi movies in the past two years. 'As an experiment, The Guru bubbles over a bit, but still coaxes laughter from an audience while challenging its boundaries.'

The Guru has the field to itself till March 12 when Gurinder Chaddha's smash British comedy Bend It Like Beckham opens in New York and Los Angeles before travelling to other American cities. To be distributed by Fox Searchlight Films, the movie comes to America after having grossed nearly $18 million in UK, $6 million in Australia and $3 million in Germany.