News
Business
Movies
Sports
Cricket
Get Ahead
Money Tips
Shopping
Sign in  |  Create a Rediffmail account
Rediff.com  » Movies » How I Finally Played Gandhi In A Film

'Top actors like Ben Kingsley, who played Gandhiji, had already raised the bar.'
'I hoped that Rajkumar Santoshi would be satisfied with my acting.' Deepak Antani's name has been registered in the Limca Book of Records and the India Book of Records for delivering 'Most Performances as Mahatma Gandhi' but it was his wife's long cherished dream that he played the Mahatma in a film.

"My wife would always stand against the photo of my late mother and pray for my well being. She would also pray that a legendary director from Bollywood or Hollywood makes a film on Gandhiji and cast me in it so that my talent gets the required recognition," Deepak tells Rediff.com Contributor Mohnish Singh.

How did you become a part of this project?

Let me tell you a very interesting story before I answer your question.

By the time I got married, my mother had left for her heavenly abode. So, my wife never got to see my mother.

After many years, I got to work as Gandhi in plays.

My wife would always stand against the photo of my late mother and pray for my well-being. She would also pray that a legendary director from Bollywood or Hollywood makes a film on Gandhiji and casts me in it so that my talent gets the required recognition.

I don't remember the exact date -- whether it was January 13 or 19 (2021) -- but a local newspaper in Gujarat carried a story that said Rajkumar Santoshi was coming with a film called Gandhi Godse.

It said Rajkummar Rao was set to play Godse while Naseeruddin Shah had refused to perform as Gandhiji.

I felt that if I read the news, maybe it was God signalling me something.

I thought I should immediately act upon it.

So I started to find the resources to approach Rajkumar Santoshi.

A friend of mine knew the casting director and he asked me to send my portfolio.

Exactly after 24 hours, I was sitting in front of Rajkumar Santoshi. Did he make you go through any audition process?

No, it was just about that one meeting. There was no audition.

He said, 'You are a theatre artiste. So Deepakji, I was genuinely in search of a Gujarati actor and you have played him (Gandhi) so many times.' It was that easy.

After that, I started exercising as I started getting a little anxious.

Top actors like Ben Kingsley, who played Gandhiji, had already raised the bar.

I hoped that Rajkumar Santoshi would be satisfied with my acting.

The subject was quite delicate, so I made sure I lost weight. I read the script a number of times and made sure I understand every crux of it. How relevant do you think Gandhiji is in today's times?

Definitely relevant more than ever in today's times.

When we talk about truth, ahimsa, justice, refraining from robbing, and all his 11 principles, they are here to stay. They are permanent.

Truth and ahimsa are the principles that have been relevant for 1,000 years and they should remain so in the future.

Our Prime Minister Narendra Modi has introduced us to Atmanirbhar Bharat and Swachh Abhiyan. These are values that have been inculcated in us by Gandhiji. The cancel culture has been growing in Bollywood. Do you think banning a film or protesting against it is the right way to voice an opinion?

When a film is made, there are loads of people who work really hard for it.

There are people who get their daily income because of these movies.

Also, a director and a writer have a certain kind of conviction when it comes to directing or writing a film.

He intends to pass on a message through a film.

After you have seen the film, you can give your honest comment about it.

But when you have not watched the film and you keep on commenting on it, that is wrong.

How familiar were you with Rajkumar Santoshi's films before meeting him?

I was well aware of his works. I had watched China Gate, Khakee and The Legend of Bhagat Singh many times.

My son and daughter are great fans of his Andaz Apna Apna. They were delighted when I told them I am working with him. When did you play Mahatma Gandhi the first time?

It was in 2004, during the 125th birth anniversary of Sardar Vallabhbhai Patel. My friends and I got together and wrote a play on Sardar Patel and performed it.

At that time, there were a few scenes of Gandhiji, so a friend told me that my features resemble Gandhiji and that I should do it.

That was the first time I played him. I am a very good mimicry artiste and, at that time, I took it lightly because the play only had two-three scenes where I had to play him.

When we talk about Gandhi and Godse, we often talk of them as two ideologies. As an actor when you play one of them, is there a conflict of thoughs or there is a clear point of view? Is it important your ideology aligns with that of the character you portray?

We should always have a broad-minded approach.

If you have a close-ended approach, you won't stand anywhere.

So whenever you are thinking about any ideology or anything, it should have room for thought.

It's not always necessary that whatever we think is the correct or the only way to look at things. 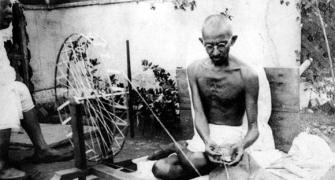 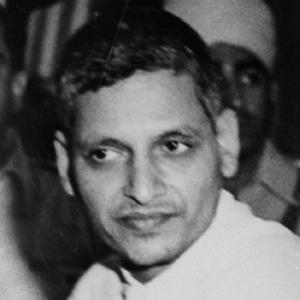