News
Business
Movies
Sports
Cricket
Get Ahead
Money Tips
Shopping
Sign in  |  Create a Rediffmail account
Rediff.com  » Movies » 'Jaya is right. We all need to defend our beloved film industry'

'Jaya is right. We all need to defend our beloved film industry'

'I haven't seen such a vicious campaign to tarnish our industry's reputation.'
'Ever since Sushant Singh Rajput's tragic death, any and everyone thinks it is their right to speak of the industry as a filthy place.' 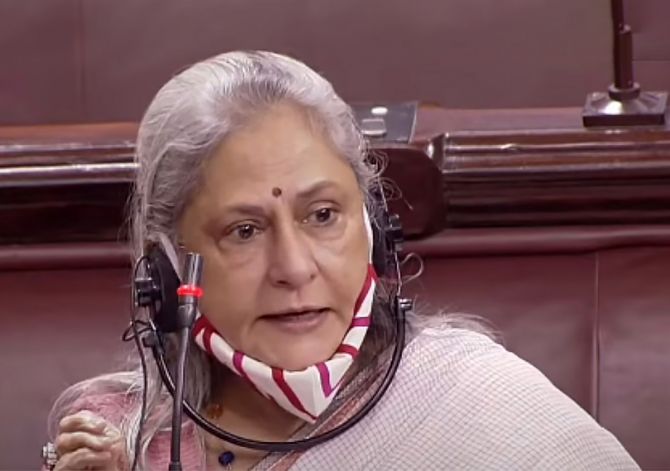 Hema Malini is baffled by attempts to tarnish the Indian film industry's image.

On Tuesday, September 15, Jaya Bachchan defended the industry in Parliament, lashing out at fellow MP Ravi Kishan for portraying it as a den of drugs.

"Jaya is right. We all need to stand up and defend our beloved film industry, which is being maligned," she tells Subhash K Jha.

"Remember, the world is watching. We need to guard ourselves against disruptive forces bent on bringing Indian cinema down."

"But Jaya may have been misinformed about what Ravi said in Parliament," Hemaji says. "I don't think Ravi would speak against our film industry which has given him everything."

Hemaji is appalled at the vicious campaign to bring down Bollywood.

"I haven't seen such a vicious campaign to tarnish our industry's reputation. Ever since Sushant Singh Rajput's tragic death, any and everyone thinks it is their right to speak of the industry as a filthy place," the veteran actor says.

"This is unfair. I have been a part of the Hindi film industry for more than 45 years. It has only given me happiness. I take immense pride in being a part of the film industry," says Hemaji who made her debut in 1968 opposite Raj Kapoor in Sapnon Ka Saudagar.

Does Hemaji deny the existence of drug consumption in Bollywood?

"I am not saying that, I am sure there is some truth to this allegation," she replies. "This evil practice of drug consumption among young people in India, which is destroying families and lives everywhere, must be stopped."

"The government should take strong action against those found to be dealing with and consuming drugs," adds the two-term MP.

"Creative people in every walk of life tend to turn to alcohol for inspiration," she says. "Bollywood's writers and directors are susceptible to alcohol consumption, but not drugs."

What Hemaji objects to is the vilification campaign against the film industry.

"These days anyone can go on one of the TRP-obsessed news channels and abuse anyone in the film industry by name. Who are these people who are constantly attacking us? And why are they not being reined in by the law?" the Lok Sabha MP asks.

"Hindi cinema is looked up to the world over. It has given the world great actors like Dilip Kumar, Raj Kapoor and Amitabh Bachchan."

Hemaji assigns blame to some television 'news' channels for the anti-Bollywood campaign.

Shatrughan Sinha, Jayaji's Gaai Aur Gori co-star, is with her too.

"Who says our film industry is filled with drug takers? I've been a part of the industry for 50 years. No has offered me any drugs or done drugs in front of me," says the former BJP MP.

"Having said that, there may be a minuscule section in the industry that does drugs. It is time to clean them out," he says.

"Kudos to her. She is 100 per cent on point," says Swara Bhaskar. "I am so glad that someone of her stature and credibility spoke up for the film industry."