Bobby Bedi, the Indian filmmaker who is currently producing a three-film series on the epic Mahabharat, at an estimated $70 billion budget, has complained to the United States Congress that enforcement authorities have been lax in dealing with peddlers of counterfeit Indian movies.

Warning members of Congress about the problem of piracy plaguing the entertainment industries in India and other developing countries, Bedi cited a recent Ernst & Young study finding that piracy was costing the Indian industry over $4 billion a year -- almost 40 percent of the potential annual revenue.

Bedi was among several witnesses at a special hearing convened by the Congressional Entertainment Industries Caucus on the eve of World Intellectual Property Day April 26.

'We feel that we should get the same treatment as American producers as far as intellectual property is concerned,' Bedi said, pointing out that retail stores in India-centric areas in New York, Chicago, Los Angeles, Houston and other places were openly selling counterfeit Indian movies.

'Nearly 90 percent of our home video market is being lost here -- right in the United States,' Bedi said, pointing out that raids on such pockets of piracy have been few and far between, and have not made a dent in the burgeoning counterfeit business. 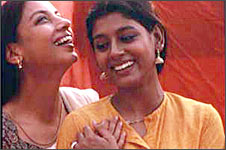 The filmmaker, noted for acclaimed movies like the Shekhar Kapur-helmed Bandit Queen and Deepa Mehta's Fire, said copyright infringement was the key problem facing India's entertainment industry. He told lawmakers that the Indian home video market in the US comprises about 15 percent, or $2 billion, of India's entertainment industry that has annual revenues of around $13 billion.

'We are losing maybe half of that -- $1 billion a year -- through piracy and related activities in the United States,' Bedi told lawmakers.

The Ernest & Young study, The Effects of Counterfeiting and Piracy on India's Entertainment Industry, commissioned by the US-India Business Council, said India's entertainment industry loses as much as $4 billion and 800,000 jobs each year due to counterfeiting and piracy.

The study was commissioned as part of the Bollywood-Hollywood initiative, where the Federal of Indian Chambers of Commerce and Industry partnered with the USIBC to promote 'the sustainable growth and convergence underway between the entertainment industries of the US and India.'

At the recent National Association of Broadcasters Show in Las Vegas, Farokh Balsara, national sector leader, Media and Entertainment for Ernst & Young, India, said India's entertainment industry has been growing at a combined rate of 18 per cent, and companies in the US have shown enormous interest in collaborating within this space.

To facilitate this, Balsara had argued, it was essential that the problem of piracy be addressed, in order to facilitate the generation of additional jobs and revenue.

USIBC director and counsel Greg Kalbaugh said the body's Hollywood-Bollywood initiative had touched a nerve, and 'companies in the US and India are lining up to offer their support. Now that we have quantified the losses, we are working with government and industry to eliminate counterfeiting and piracy at the source.

'The first step is supporting India's adoption of sensible legislation which regulates the production of optical discs,' Kalbaugh said, predicting that this would have 'an immediate impact on the rates of counterfeiting and piracy.' 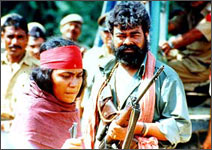 Kalbaugh said he was constantly approached by content providers, distributors, producers, and financiers, all of whom have the same story: 'counterfeiting and piracy are killing our industry and it's about time we banded together to put a stop to this.'

Congresswoman Diane Watson (California Democrat), whose constituency includes Hollywood and who chairs the Caucus, sympathised with the problem. Referring to Bedi's testimony, Watson said it was 'the story of one filmmaker who has made a tremendous contribution to India's burgeoning entertainment industry, but he represents just one of the thousands of filmmakers around the world who are victims of piracy.'

Michael Ryan, director of the Creative and Innovative Economy Center at the George Washington University's Law School, said, 'Originality and innovation are essential to driving long-term growth in developing economies, and piracy creates a real dilemma for filmmakers like Mr Bedi and curtails their imagination.

'So long as pirates earn a high share of movie revenues, producers must focus on making relatively inexpensive movies. To inance a grander vision, the creators must receive not just the critical but also the monetary rewards of inventiveness.'