Bollywood A-listers Alia Bhatt and Ranbir Kapoor got married on Thursday, not in a big fat Indian wedding spangled with tinsel as many would have imagined but at their Bandra apartment with just family and close friends in attendance.

Though there was no word from the family till the evening, some of those who had set up the mandap came out at about 6 pm to tell the waiting media that the wedding ceremony was over. Later, those close to the family confirmed that the rituals were indeed over.

Soon after, Ranbir's brother-in-law Bharat Sahni left the apartment complex Vastu. And bouncers sprung into action to clear the road for the celeb guests who would be leaving in their cars.

The media and those waiting outside were treated to laddoos. Dholaks were heard too, perhaps the only concession to the otherwise understated affair.

With no information coming from the couple or from their families, it was left to the security teams to brief the media.

"Ranbir and Alia will pose for pictures after 7 pm today. Only one camera from each publication will be allowed," Yusuf Ibrahim, the man in charge of Alia's security, told reporters outside the apartment building earlier in the day.

And true to his word, the couple did come out on time to pose for pictures. Boxes of snacks were distributed among the media personnel, who have been keeping vigil outside Vaastu.

Given that both Ranbir, Raj Kapoor's grandson and a scion of the first family of Bollywood, and Alia, daughter of film-maker Mahesh Bhatt, are from Bollywood families, the star presence was a given, and kept the cameras whirring.

Among those who came in were Ranbir's mother Neetu Kapoor, sister Ridhima Kapoor Sahni and her family, cousins, actors Kareena Kapoor Khan, Karisma Kapoor, as well as Aadar and Armaan Jain along with their mother Reema Jain, and uncle Randhir Kapoor. The entire stretch from Vastu to the under-construction building, where the couple is expected to live, was strung with lights from trees. The two properties are just about 180 metres away from each other.

For reporters and photographers tasked with covering the endlessly discussed star wedding, the last several days have been akin to piecing together a jigsaw -- white curtains used as screens on windows, celeb designer Sabyasachi Mukherjee branded bags going in, stray comments from family and studied silence from Alia and Ranbir. 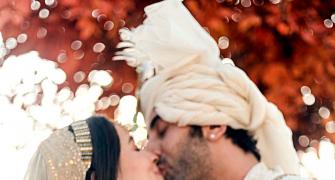 Why Alia-Ranbir Make The Perfect Couple